Loving Someone with Alexithymia

Although people with alexithymia fall in love, they don't know how to show affection. Their significant others find themselves in an emotional vacuum, where their most basic emotional needs aren't being met. Read on to learn more! 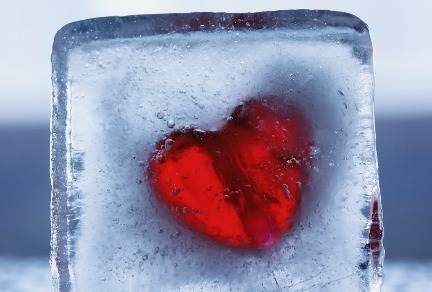 Being in a relationship with a partner with alexithymia can be extremely difficult because one of the main characteristics of this condition is lack of empathy. If your significant other has alexithymia, you won’t get the emotional validation or authentic intimacy that make a relationship meaningful and genuine.

Loneliness, uncertainty, misunderstanding… These are feelings that often come up for those in relationships with alexithymic people. It’s also important to acknowledge what alexithymic people experience in the context of a romantic relationship. They fall in love, experience emotions, feel happy, and suffer just like anyone else. However, and this is where the problem lies, they’re incapable of expressing what they feel. They also lack the ability to understand the emotional cues of those around them.

Alexithymia is a psychological condition that many experts define as a neurological disorder and others as a psychological disorder with social determinants. It’s socially very limiting and highly problematic for an individual’s emotional life. A study by Dr. Nestor Fry-Cox at the University of Missouri also suggests that alexithymia could be a significant contributing factor to breakups.

Researchers estimate that nearly 10% of the population suffers from this emotional communication deficiency. It’s especially common among men.

The word alexithymia is Greek and means “absence of words to express emotions or feelings”.

What Is it Like to Have a Relationship with an Alexithymic Person?

Dealing with alexithymia can be extremely taxing on a romantic relationship. One reason is because, most of the time, neither partner is even aware of the psychological disorder or neurological alteration affecting their relationship. Many people go undiagnosed because the scientific community hasn’t come to a consensus about the issue. However, even if they did, many people have no idea what causes their inability to express and understand emotions.

In 1972, psychiatrist Peter Sifneos described this condition for the first time. While there’s a lot that we don’t know about it, scientists believe alexithymia could be related to a change in the limbic system. They also believe that there’s no connection between alexithymia and psychopathy. Alexithymic individuals, unlike psychopaths, feel a normal range of emotions. They just can’t interpret their own emotions, nor other people’s emotions.

As a result, alexithymia in a relationship has the following consequences:

Inability to Express what They Feel

If your partner has alexithymia, they’ll never tell you that they’re angry, happy, excited, or worried. The emotions that they feel are mysterious. They’re just a set of physiological experiences that cause tension, disquiet, stomachaches, etc. People with alexithymia can’t express what they feel because they don’t know what’s going on in their bodies. They’re experiencing emotions, but they can’t name them.

Consequently, they can’t manage their anger or communicate the love that they feel. They’re incapable of any of the normal emotional expressions that manifest in a relationship.

People with Alexithymia Don’t Understand what Their Partners Feel

Alexithymic individuals are incapable of identifying other people’s emotions. They don’t understand why their partner is hurt by certain behavior, or that they aren’t happy, or that they need something, why they’re sad, why their mood changed, etc.

If your partner has alexithymia and you want to have an intimate conversation about something, you’ll be disappointed. You’d be asking them to delve into the emotional aspects of life that make them uncomfortable. They simply don’t know how to manage, see, or understand basic human emotions.

Likewise, the way that alexithymic people communicate is striking. They don’t like reflection, double-meanings, poetic language, irony, or romance. Their reasoning is logical, concrete, and literal. As a result, they communicate in a rigid and frustrating way.

My Partner is Alexithymic. What Should I Do?

Making plans, solving problems, and even agreeing about simple things can be complicated for someone with alexithymia. After all, our basic social structure is dictated by emotions. So, what can you do if you’re in a relationship with an alexithymic person?

It’s important to know that this condition is often accompanied by other disorders. It often goes hand-in-hand with depression, stress disorders, or Asperger’s.

Whatever the case may be, an appropriate diagnosis is key. The alexithymia diagnosis is on a spectrum. In other words, some cases will be more severe and other people will only have a few traits. It’s important to seek professional help so you know what you’re dealing with.

Remember that an alexithymic person has feelings, but they can’t express them. One way to deal with that is to establish some basic codes that they can use to express emotions. Caresses, physical contact, and other body language are common ways that couples seek validation from their partners.

Lastly, you should remember that not everyone responds well to therapy. In fact, many people with alexithymia are reticent to accept specialized help because they believe other people are the problem. Some alexithymic men and women believe that their partners have emotional problems. They think they’re too intense and irrational.

In that case, the best option is your own well-being. If your alexithymic partner isn’t willing to seek help or try to change, there’s no point in prolonging your suffering. You have to know when to throw in the towel.

Autism Is Nothing to Be Ashamed of, But Ignorance Is
Autism is classified as a developmental disorder that affects communication and social relationships. A child with autism has a more limited repertoire of interests and activities, with a tendency towards repetition and stereotypy. Read more »
Link copied!
Interesting Articles
Romantic Relationships
Hypervigilance in a Relationship

Do you act like a detective in your relationship? Are you always looking for signs of changes or clues that…

There are many theories on the role of physical attraction in love and relationships. Many of them focus on the…