Cell Phones Can Damage Relationships and Cause Lack of Empathy

Discover how cell phones can damage relationships in this article! 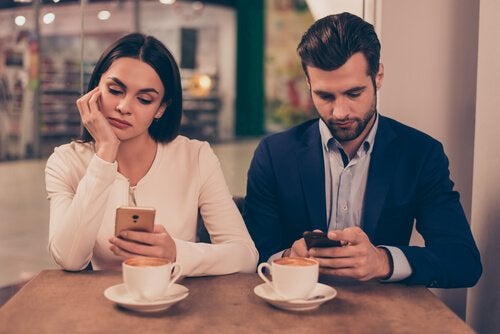 Have we forgotten what it means to have a conversation? Do we get bored listening to others and only seek attention when we need comfort or help?

Clinical psychologist and sociologist Sherry Turkle has conducted extensive research on the subject that she shared in her book Reclaiming Conversation: The Power of Talk in a Digital Age (2015). In this book, she stated that teenagers have reduced their empathetic capacity by 40%, as well as their ability to engage in deep conversation, and that cell phones are to blame.

New technologies have created a world in which people are hyperconnected at all times at a superficial level. Multitasking is very common, and many feel that they shouldn’t take too many breaks.

“True love is a lack of desire to check one’s smartphone in another’s presence.”

Nowadays, a large part of social and work-related interactions occur through electronic means, such as computers, phones, and tablets.

Face-to-face conversations have been relegated to the background, and some people even see them as a waste of time. If you have to solve a business problem, you send an email. If you want to ask for forgiveness, you write a text message.

Since facing conflict or emotional situations can generate anxiety, new technologies offer the possibility of reducing some of it. Young people justify using new forms of communication as an easier and faster way to express their thoughts. They say that mobile devices allow them to rewrite what they want to say, correct mistakes, or avoid tense situations that they wouldn’t know how to solve in person.

The problem is that screens don’t allow us to enjoy one of the most enriching parts of conversation: non-verbal language. We miss out on gestures, intonation, looks, and real emotions. This is quite worrying because, according to experts, 70% of communication is non-verbal.

Human interaction has been replaced with “memes” or emoticons. It’s even hard for people to maintain deep conversations for extended periods of time.

As a result, humans now have a lot of difficulties in managing their emotions, facing difficulties, and carrying out responsibilities. If you don’t share content on the Internet, it’s like you don’t exist. If you don’t share your vacation on social media, people may believe that you didn’t actually take it or that you didn’t enjoy it. Therefore, what you share is a reflection of who you claim to be, but not who you really are.

Under these circumstances, it’s harder to empathize with others and put yourself in their shoes to try to understand their emotions and thoughts. The world is becoming purely visual and superficial.

Furthermore, there’s a great demand for new and constant stimulation. If you’re bored in class, your cell phone is the perfect distraction. The same happens during boring moments in a TV show, movie, or book.

“You need to build an ability to just be yourself and not be doing something. That’s what the phones are taking away.”

Spaces that used to present opportunities to engage in conversation no longer fulfill this function. On buses or subways, many people look at their phones. In line at supermarkets and stores, people wear headphones and check their social media feeds.

People don’t talk and, if they do, they talk about what they see on their phones. We’ve become soundproof machines. We don’t pay attention to what’s happening around us, nor do we talk to strangers next to us. Instead, we jump from one application to another, trying to kill the disturbing silence.

Although we have thousands of social media followers we can exchange “likes” or start chats with, we get bored after a few minutes. This is because we’ve become perpetually dissatisfied and unable to build authentic relationships. How can we expect to learn how to listen if no one is teaching us the value of conversation and empathy?

Where has our ability to feel deeply gone?

In this fast-paced world, hyper-connectivity and multitasking are the standards. While you answer an e-mail from your boss, you might be checking a friend’s latest Facebook post as well as the weekend’s weather forecast. While you’re reading a book, you keep your cell phone nearby to immediately answer any text messages you might receive.

We ask our children not to use their cell phones at the table, but if we receive a phone call, we answer at once. Although we’re anxious about the fact that we have to be constantly available online, we also become anxious when we “disconnect” for too long.

Some companies seem to judge their employees according to their availability and willingness to be perpetually connected to their work networks. In this regard, your boss might fire you if you don’t answer an e-mail at 11:00 P.M.

It hurts when you know someone read your message but didn’t reply. Some people even anxiously check to see when their friends were last online.

Do new technologies really make us more efficient? Are your best friends those who answer quickly, even if they limit their responses to superficial emoticons? We’re confusing speed and quantity with quality and value.

Small moments of disconnection help people reconnect with their own thoughts. These moments also offer spaces to really talk and listen without cell phones getting in the way.

People build and reinforce their connections during face-to-face conversations. This is because you can see how the other person feels and listen to their ideas and concerns. You can empathize with them because you can see their joy or suffering with your own eyes.

Deep, personal conversations awaken emotions inside you. They give you a space to open up and vent, to be heard and respected.

How Social Networks Affect Our Self-Esteem
Social networks affects our self-esteem in many ways. In this article, we'll explore some negative consequences of too much social media. Read more »
Link copied!
Interesting Articles
Family
The Emotional Wound of Bullying in the Victim and Their Family

Family
Parents: Your Role in the Fears of Your Children

Romantic Relationships
Attain a Deeper Connection with Your Lover

When people try to attain a deeper connection in their relationships, they tend to place more emphasis on how much…