Love: If You Give It, You'll Receive It 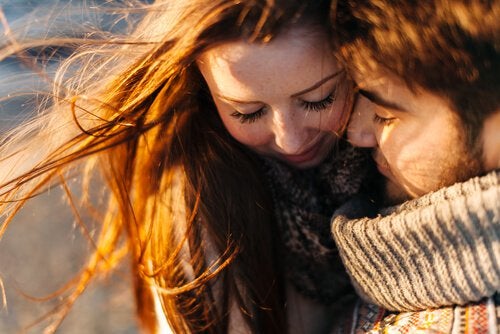 If you give love, you’ll probably receive love back. Human beings tend to function as a sort of mirror when it comes to exchanges, even with emotions. On the other hand, we tend to be loyal to the principle of reciprocity, as shown in the phrase “today for you, tomorrow for me” or the saying “you owe me one.” In some way, we can owe not only money, but also actions and feelings.

To know a little bit more about love and giving and receiving it, I’d like to focus this article on the psychologist Robert Sternberg, whose triangular theory of love based on interpersonal relationships distinguishes three important components: passion, intimacy and commitment. Components that, following a geometric metaphor, occupy the vertices of this supposed triangle.

A little about Robert Sternberg

Robert Sternberg is a North American psychologist who was born in 1949. He has given classes at Yale University and has chaired the American Psychology Association, to which some of the best professionals in the specialty belong.

Sternberg has based his studies and investigations on human intelligence, wisdom, hate and, of course, love.

The triangular theory of love

Let’s focus now on the triangular theory based on Robert Sternberg’s investigations about this feeling. As we said previously, Sternberg focuses on three components within relationships: intimacy, passion and commitment.

Types of love according to Sternberg

If you give love, will you receive love? In the triangular theory of love, Robert Sternberg distinguishes between different types of love, which could also be considered stages or phases. Nevertheless, combinations of two or more stages can occur. So they are not exclusive among each other.

“I love you to love you, not to be loved, since nothing gives me more pleasure than seeing you happy.”
-George Sand-

If you give love…

If you give love, it might be a good idea to ask yourself the same questions that Sternberg asked the couples who took part in his study. We have listed them below because surely you’ll find them very interesting and useful in order to study your own relationship:

Sternberg asked these questions to men as well as women during his study of the triangular theory. He found some answers that, though they were not surprising, were very clearly related to the feelings generated in each of the members of the couples.

Results of the triangular theory of love

After asking the previous questions to the male and female members of various couples, the results were very similar in terms of gender, regarding passion, commitment and intimacy. Nevertheless, some small differences could be seen:

Does the triangular theory of love mean that if you give love you’ll receive it? Maybe it doesn’t affirm it out right, but it’s obvious that if you give it, if you offer good levels of commitment, intimacy and passion, it’s very likely that nothing will go wrong within your relationship.

Psychology
I Have the Right to Make My Own Decisions