Love and Addiction: Why Are They Connected?

It may seem strange to you, but the fact is that love and addiction, at least to cocaine, have withdrawal syndrome in common. When a couple breaks up, an abstinence syndrome related to the loss of the loved one occurs. 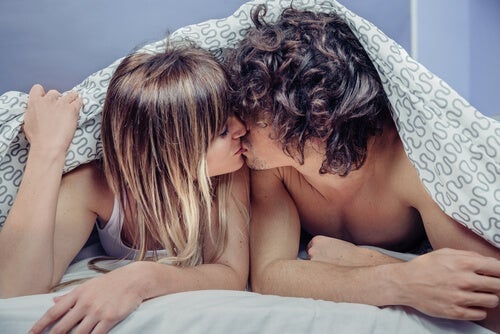 In some way, we’re all familiar with the idea of love. However, different cultures understand it in different ways. The neural system of pleasure is fundamental to this experience. However, contrary to what you may think, love is linked more to the motivational system than to the emotions (see bibliography, reference 1). Therefore, what do love and addiction have in common?

The behavior that takes place in love and addiction can be explained by the neurochemistry of the brain. Thus, love is related to certain functions in the central nervous system, and with certain nuclei and neurotransmitters. These have, as their only purpose, the couple’s attachment for reproduction purposes, and also for the care of the offspring (see bibliography, reference 2).

Love and addiction: what they have in common in the brain

The chemistry of romantic love

When we’re attracted to a person, in many cases, the first thing that happens in our brain is a kind of need to be sexually gratified. This process is influenced by hormones (of course), specifically estrogens and androgens.

This leads to romantic love. This is the process of focusing our attention on a particular person for reproduction purposes. In addition to this, there’s also the need for an emotional union with that person (1). At this stage, in your body, there’ll be:

Finally, there’s a stage in the lives of couples where they should take care of their children. During this stage, an important emotional union occurs, as well as a feeling of comfort. The following neuropeptides influence this behavior:

Some of the behaviors that can be observed when falling in love are the following (1):

Therefore, we can explain all these behavior patterns by using neurochemistry. Let’s see what happens:

When dopamine increases, our attention increases. As a result, we’ll tend to consider the other person as unique. This can cause:

It seems that all these manifestations can also occur in drug dependency, such as when using cocaine or amphetamines.

The common factors between love and addiction: cocaine withdrawal syndrome and falling in love

It may seem strange to you, but the fact is that love and addiction, at least to cocaine, share this withdrawal syndrome. In the case of a breakup, this abstinence syndrome is in relation to the loved one.

In short, it seems that we can compare the stages of love to the stages in an addiction. It so happens that our behavior in addictions and in love are quite similar, even to the point of having the same neurochemical foundations and behaviors.

Cocaine withdrawal has the most similarities to the loss of a partner. This is why we can state that science supports the hypothesis that love, in many ways, resembles an addiction.

What Are Behavioral Addictions?
Although they don't depend on substances, behavioral addictions can be extremely dangerous and harmful. In this article, we'll talk about some common ones. Read more »
Link copied!
Interesting Articles
Behavioural Biology
Types of Synapses: Neural Communication