The Challenge of Learning How to Be Angry 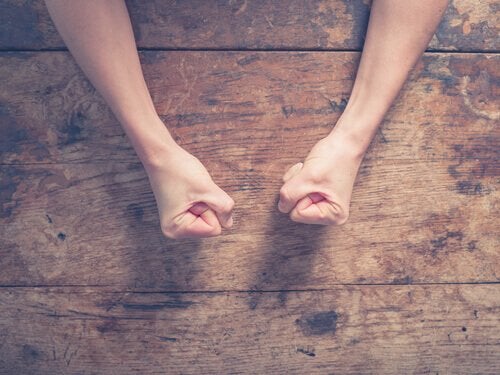 We all know how to identify times we were annoyed or acted bitterly and vindictively. But do any of us know how to spot situations that make us angry? Is there any way to learn how to be angry and show it at the right time and to the right person? Yes, but as always you have to do some work on yourself first.

We’re going to give you an example of why it’s important to know how to be angry. A couple has an argument at home. They both scream what they think and leave it at that. One partner goes to work and at some point in the day, a subordinates makes a small mistake. He yells at him and gives him no chance to answer for himself.

The one who got yelled at then goes home. He ends up getting angry with his daughter for not listening and so he punishes her. Then she goes to school and gets in an argument with a classmate because he’s being rude.

So what we get is an endless cycle that could have just ended with the couple. If they’d talked through the problem and listened to each other, none of it would have happened.

Identifying situations that make you angry

Your mistake might be that you think it’s external things or other people that make you angry. But what’s actually making you angry is something to do with you. Not everyone gets angry about the same things, and not everything makes everyone angry. So the first thing you have to do is identify what specific actions or words set you off.

If you can identify it, then you can work on it and put a stop to it. Knowing yourself well will give you tools to understand yourself and realize that there are some things you can’t stand because they affect a part of you that you don’t like, don’t know, and need to keep working on.

Being angry is totally normal and healthy. But it is your responsibility to know how to be angry with the right person, at the right time. Never let the anger last any longer than it needs to. Always communicate what you don’t like. Being quiet about things that make you angry isn’t a permanent solution to the problem.

Knowing how to communicate your anger

There are to communicate about anything that you find unpleasant. The first one is to calm yourself down so that you can talk about things calmly and find some solutions. Remember that yelling rarely helps people come to any kind of agreement.

How to communicate your anger

Learning how to be angry is a challenge. It takes a lot of effort and practice, but it’s worth it. You’ll start to feel better, and you’ll be able to improve your relationships, both with yourself and everyone else. So don’t wait any longer: start working through this challenge. Do you know how to be angry?

Why Anger is Poisonous For Our Minds and Bodies
There are many different types of anger, ranging from annoyance to full blown rage. If we don't try to control our anger we could be doing serious damage to our bodies. Read more »
Link copied!
Interesting Articles
Wellness
Teaching Our Children to Value What They Have

When, in childhood, we have suffered a shortage, a lack of something, it is common that we want to do…

It may be hard to face whatever's happening in your life, either because you're afraid, don't know how to act,…

Wellness
Life Is Good for Those Who Know How to Smile

Wellness
Happiness Is Found in the Madness of Life

I know many people who spend most of their time trying to put everything in order, and I'm sure you know many…

Wellness
Admit It: You're Beautiful

Beautiful people are everywhere, because each one of us emanates beauty; with our sensitivity, the expression of our emotions, the love that we share, and with each one of the…