Learn All about Antipsychotics

Typical and atypical antipsychotics treat the symptoms of schizophrenia. Read on to learn about the properties of these medications and their side-effects! 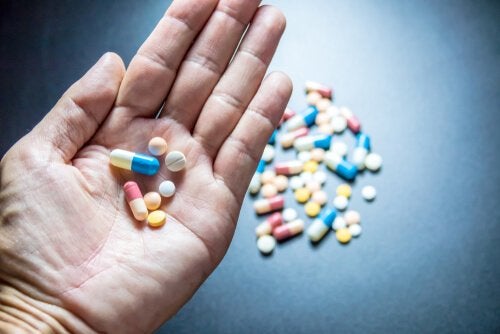 People can only buy antipsychotics with a prescription. They’re approved for treating mental health problems characterized by psychotic symptomology. For example, schizophrenia, schizoaffective disorder, and some forms of bipolar disorder or severe depression.

Some antipsychotics can also be used to treat severe anxiety (but only in very small doses) as well as physical issues, balance issues, and nausea. However, doctors don’t recommend them for the psychotic symptoms of dementia.

Another name for these drugs is “neuroleptics”. Some people prefer this term because it means “to take over the nerves” which perfectly describes what the drug does.

The Science behind Antipsychotics

One of the most widely accepted hypotheses about schizophrenia argues that dopamine is the primary neurotransmitter involved in schizophrenia. Dopamine affects the brain through many pathways:

The Main Types of Antipsychotics

The main difference between these two groups is that first-generation antipsychotics block dopamine while the second-generation ones affect serotonin levels.

Some research suggests that certain second-generation drugs have less-pronounced body movement side effects than first-generation ones.

Scientists developed these drugs in the 1950s. They’re divided into different chemical groups. They all act in more or less the same way, and patients usually take them orally.

These drugs can cause extrapyramidal side effects such as:

Healthcare professionals generally prefer to prescribe second-generation antipsychotics, which researchers developed in the 1990s. They tend to have milder neuromuscular side effects than first-generation drugs.

They also cause fewer sexual side effects compared to older drugs. However, these newer iterations are more likely to cause metabolic problems, including rapid weight gain.

Clozapine is the only medication approved by the FDA to treat schizophrenia that’s resistant to other treatments. Doctors also prescribe it to help schizophrenic patients with their suicidal thoughts.

Some examples include risperidone (Risperdal), quetiapine (Seroquel), olanzapine (Zyprexa), ziprasidone (Zeldox), paliperidone (Invega), aripiprazole (Abilify), and clozapine (Clozaril). Clozapine is different than the rest of the drugs, which is something we’ll explain later in the article.

Healthcare providers use these second-generation antipsychotics to treat anxiety and mood disorders, bipolar disorder, post-traumatic stress disorder (PTSD), and obsessive-compulsive disorder (OCD). They do this in spite of the fact that the FDA hasn’t officially approved the use of these medications for those particular disorders.

Antipsychotics with the Most Side-Effects

With the exception of clozapine, both groups of drugs are equally effective. Doctors choose the medication based on the side effects.

One advantage of atypical neuroleptics is that they don’t contribute to the dopaminergic block in the mesolimbic pathway, which is beneficial to the patient. Also, they increase dopamine secretion in the nigrostriatal and mesocortical pathways. This reduces the extrapyramidal effects and negative symptoms caused by the dopaminergic block.

Given that most of the clinical trials have compared medications to haloperidol at a relatively high dose, there are doubts about this possible benefit. It also seems like there are other common side effects.

Researchers believe that atypical antipsychotic drugs could be more effective than older drugs for treating negative affect or just general negative symptoms (decline in the patient’s thinking and behavior).

Experts also associate clozapine with a higher incidence of anticholinergic effects (similar to that of Chlorpromazine) and agranulocytosis. The incidence of these particular problems with the rest of the atypical antipsychotic medications isn’t higher than that of haloperidol.

Anticholinergic effects, sleepiness, hypotensive muscles, and weight gain are common side effects of atypical antipsychotics. There also seems to be a higher risk of hyperglycemia, especially with clozapine and olanzapine.

The frequency of some adverse side effects depends on the atypical antipsychotic you’re taking. It’s impossible to draw reliable conclusions on the drugs because we don’t have enough research on the subject. Not yet anyway…