Schizophrenia is a complex disease that is more common than you think. Dr. Nancy Andreasen has dedicated her life to schizophrenia research and has made many important contributions to the field. Keep reading to find out more about this important modern scientist! 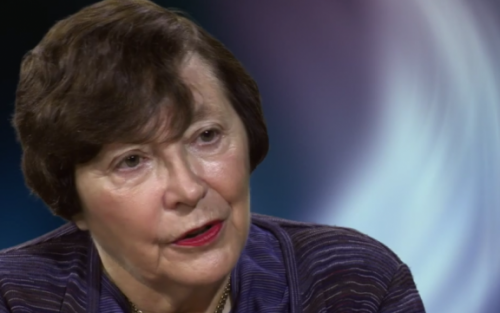 Dr. Nancy Andreasen is a psychologist from the United States. She holds the Andrew H. Woods Chair of Psychiatry and is and Director of its Neuroimaging Research Center and the Mental Health Clinical Center at The University of Iowa Carver College of Medicine.

Although you may not have heard of her, Dr. Nancy Andreasen is a renowned researcher who has made important contributions to the study of schizophrenia. But she hasn’t always been involved in medicine. Dr. Andreasen actually has a Ph.D. in English literature, with specialization in Renaissance literature. She worked as a professor in that field until her life took an unexpected turn. After the birth of her first daughter, Andreasen had some serious health problems that inspired her to study medicine.

Dr. Nancy Andreasen is a pioneer in many ways. Her career is marked by a series of important “firsts”:

Dr. Andreasen also contributed to psychiatric diagnosis in the DSM-III and DSM-IV task groups. In fact, she was responsible for building the foundation for stress disorder research with her definition of Post-Traumatic Stress Disorder (PTSD) for the DSM-III.

Andreasen was also the president of the American Psychopathological Association and the Psychiatric Research Society. She’s currently a member of the Institute of Medicine of the National Academy of Sciences and the American Academy of Arts and Sciences.

Dr. Andreasen is a leading expert in the field of schizophrenia. She has carried out numerous studies and has contributed to the understanding of the mechanisms and treatment of this disease.

Schizophrenia is one of the leading public health problems we face today. It affects 1% of the population. According to the World Health Organization, it’s in ninth place in the medical illness category in terms of the global burden of disease. It’s above cancer, AIDS, heart disease, diabetes, and other important illnesses.

Thus, none of the patients suffer from all the symptoms. Consequently, schizophrenia differs from other mental illnesses that generally only affect one brain system. Some examples are Alzheimer’s, which affects memory, and bipolar disorder, which affects mood.

The reconceptualization of schizophrenia

Dr. Nancy Andreasen’s modern reconceptualization of schizophrenia divides the symptoms into two categories: positive and negative. She defines positive symptoms as an exaggeration of normal functions (the presence of something that should be absent) and negative symptoms as the loss of normal functions (the absence of something that should be present).

In the language of neuroscience, schizophrenia is an illness that affects distributed neural circuitry instead of individual cells or individual regions. Most people with schizophrenia have a subjective sensation that their ability to think and feel is disorganized or disconnected in some way.

Neuroimaging has allowed scientists to study how the brains of schizophrenic patients work differently. These studies have demonstrated that the subjective “disconnection” or “disorganization” experiences reflect a problem in the ability of distributed brain regions to send messages back and forth in an efficient and precise way.

The etymology of the word schizophrenia is a perfect description of the disease. It literally means “fragmented or disconnected mind.” That is exactly what scientists have seen through neuroimaging.

A life dedicated to research

These days, Dr. Nancy Andreasen continues her research to expand our knowledge of schizophrenia so that we can improve the treatment of the disease. She is working on structural and functional neuroimaging studies, longitudinal course and results studies, and studies that examine genetic and genomic factors and integrates them with neuroimaging studies.

Dr. Nancy Andreasen is, without a doubt, a key figure in the fields of psychiatry and schizophrenia.

Childhood Schizophrenia, a Challenge of the Present for the Future
Schizophrenia is a disorder that rarely begins to manifest itself in childhood. However, this, unfortunately, does happen in some cases. Learn about childhood schizophrenia here. Read more »
Link copied!
Interesting Articles
Psychology
Don't Take Responsibility for Rude People and Their Actions

The world mandala comes from Sanskrit, and it means "sacred circle." Mandalas are circular symbols that are part of a lot of different cultures. Buddhism, Hinduism, Christianity, and some indigenous tribes…

Assertive children are happy children because they learned to communicate exactly how they feel and what they want. Because they…