The Language of Depression

Depression manifests itself in your life in many different ways. Nevertheless, its worst trick is the way it deforms everything. It changes your behavior, your motivation, your habits, thoughts, and language. 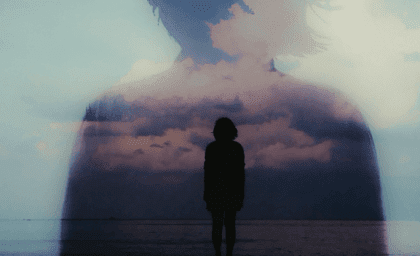 The language of depression has a voice and it changes you. Anxiety, apathy, and desperation seep into the words you choose. They even affect your speech patterns. Everything is shorter, darker, and motivated by a deep bitterness that distorts reality.

Depression manifests itself in your life in many different ways. Nevertheless, its worst trick is the way it deforms everything. It changes your behavior, motivation, habits, thoughts, and language. Sometimes, instead of reacting to depression, people end up assimilating its dark presence as another part of who they are.

“Depression is a prison where you are both the suffering prisoner and the cruel jailer.”

We say this for a very concrete reason. Some people try to normalize these helpless states of mind. Depressed men and women barely manage to fulfill their obligations and responsibilities, but no one notices the shadow that follows them. In this regard, now we have new technology that uses social media to identify linguistic patterns related to depression. The results reflect the high rates of depression that exist in our society.

The University of Texas conducted a study on detecting signs of depression in human interaction with social networks and internet forums. Our teens, for example, tend to use these platforms to vent and communicate. It’s alarming to come across these clear signs of psychological disorders so often in people who aren’t receiving any treatment. Why not? Because no one has identified their disorder yet.

Remember that depression leaves a mark. There are clues that evidence depression in the way you communicate. Let’s delve a little deeper into the language of depression.

How to identify the language of depression

The language of depression is part of our culture. Though this might surprise you, it’s a fact. There are plenty of songs that reflect the emotional state of a musician in a dark and complex life stage. Artists like Kurt Cobain and Amy Winehouse are great examples of this genre. We love their lyrics because we love sad songs and stories.

We see more examples of this in theater, literature, film, and poetry. Silvia Plath, a well-known poet, said “Dying is an art, like everything else. I do it exceptionally well”. Virginia Woolf left plenty of obvious and sometimes brutal clues in many of her books, like The Waves and Mrs. Dalloway.

In certain cases, these mental disorders lead to creative genius (like in the above examples.) It’s almost like a deal with the devil because success, recognition, and creative mastery often end up taking the artist’s life. You can often see it coming. Their work is riddled with clues of their impending, desperate, and sad end. After all, the language of depression is bitter and has patterns that are easy to spot. They’re mirrors that reflect their owners’ tumultuous inner life.

Let’s learn how to identify the language of depression.

At the beginning of this year, Clinical Psychological Science magazine shared one way to detect depression through language. We aren’t just talking about oral communication, either. As we mentioned in the beginning, we now have the technology to identify certain disorders through social media.

It’s important to mention that experts relate these kinds of expressions with people who are having suicidal thoughts.

The use of pronouns

Another feature of this kind of language is the almost exclusive use of the pronoun “I”. The world of a depressed mind becomes tiny, reductive, and oppressive. Within this suffering, only one person resides. This “I” can no longer connect with other people and is unable to see things from other perspectives. They have lost the ability to empathize, relativize, or open up to other more optimistic ideas.

The constant use of the first person is another manifestation of the negative emotions that become overwhelming.

Language is a reflection of your thoughts and mood. So, when depression reigns, you end up ruminating on your obsessive thoughts. This persistent habit is like stagnant water. Nothing new comes in, just the same old information moving around and festering until it makes you sick.

That’s why you often hear a person with depression bring up the same topics over and over again. They get stuck in certain conversations, negative ideas, doubts, and obsessions. Asking them to stop or change the subject is useless. They just can’t do it.

The useful thing about understanding the language of depression is that you can pick up on the first clues from those around you and try to intervene. This is relevant for so many of us, especially those of us who have kids and teens.

Some people credit certain behaviors and communication styles to a normal rebellious teenage phase. However, these dynamics and expressions don’t reflect a personality type. Instead, they’re often evidence of a psychological disorder. Depression is more and more common every day. Consequently, it’s important to know the best way to respond so you can try to prevent it.

The Symptoms of Depression
The symptoms of depression are as wide-ranging as they are individual to each person. But they all share one dark reality: chronic pessimism and an inability to keep up with life. It's a completely paralyzing illness. Read more »
Link copied!
Interesting Articles
Psychology
4 Relaxation Techniques to Help You Sleep Better

Being grateful offers many benefits for the whole world. For individuals, these benefits range from physical health to mental health. However, encouraging gratitude in…

Just as there are many theories and terms in psychology that we're commonly used to and that, to a greater…

We've all encountered people who set expectations, commit to something, and then don't show up. You see it in couples when one of the two disappears and the other doesn't know…