Keanu Reeves is a different kind of celebrity. On his birthday one year, he was spotted celebrating by himself on a park bench with a cupcake and a coffee, which he offered to everyone who came by to say hello. 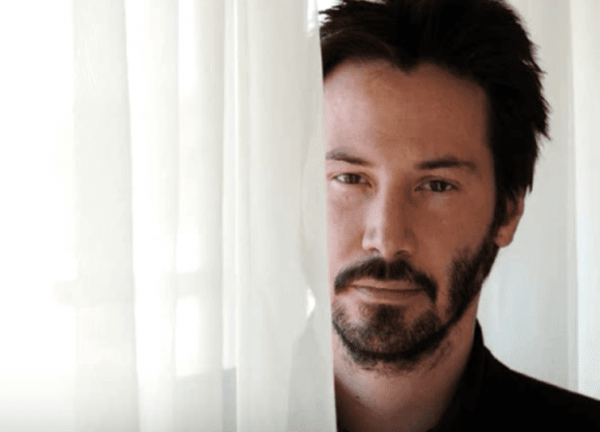 Keanu Reeves became famous for his portrayal of Neo in the movie The Matrix. At first glance, he seems like any other Hollywood celebrity: successful, rich, and probably a bit disconnected from how “normal” people live. However, Keanu Reeves isn’t a typical celebrity.

Keanu’s life has alternated between moments of stunning success and serious personal tragedy. His resilience is admirable. He accepts that there are lessons to be learned from difficult experiences. He doesn’t pretend to be a guru or a saint, rather someone who’s capable of recognizing and truly valuing what’s important in life. He’s an inspiration to everyone.

“Money doesn’t mean anything to me. I’ve made a lot of money, but I want to enjoy life and not stress myself building my bank account. I give lots away and live simply, mostly out of a suitcase in hotels.”

Keanu Reeves was born in Beirut, Lebanon, on September 2nd, 1964. His mother was English and his father was from the United States. He had a sister who was two years younger than him. His father was an abusive alcoholic who left the family when Reeves was just three years old.

Keanu’s father ended up in prison for selling drugs. Keanu practically met his father for the first time when he was six years old and saw him once again when he was 13.

Keanu’s mother worked as a stripper in night clubs to make ends meet, often bringing men home with her. The family moved to Australia and later to the United States. In New York, Keanu’s mother married a Broadway director and they all moved to Canada. The marriage, however, only lasted a year.

A life marked by tragedy

Not only did Keanu Reeves have a traumatic childhood, but he also had to face heartbreaking tragedy later on in his life. His only sister was diagnosed with leukemia and, although she recovered, the experience had a profound impact on him. Years later, she relapsed and he had to relive the traumatic experience all over again.

Keanu decided to become an actor after an injury forced him to stop playing hockey, which he considered his true vocation. He never finished high school, but he was always drawn to art. His father helped him find a job as an actor in the United States. One of his first films was My Own Private Idaho, which premiered in 1991.

On set of that movie, he met his best friend, River Phoenix, Joaquin Phoenix’s younger brother. Unfortunately, River Phoenix was a drug addict who died of a heroin and cocaine overdose at a young age. For a long time, Keanu blamed himself for his friend’s death because he believed he could have done more to help him.

In 1999, Keanu Reeves’s long-time girlfriend Jennifer Syme, an actress and Keanu’s personal assistant, gave birth to a stillborn baby girl just before Christmas. After the death of her daughter, Syme became really depressed. A year and a half later, she died in a car accident on the way to a party.

A year later, Keanu’s sister suffered a cancer relapse. He dropped everything to be with her. In spite of all the tragedy and pain, Keanu Reeves has been able to keep living a good life. Unlike many celebrities, he lives in a modest apartment and gets around on the subway.

The actor has donated a huge part of his fortune to organizations that fight cancer. He has also donated money to struggling hospitals. Some people believe he’s donated hundreds of thousands of dollars.

Keanu prefers to lead a simple life. He’s said many times that fame and fortune aren’t the most important things for him. He loves to ride his motorcycle and study Buddhism, even though he doesn’t consider himself a Buddhist. He’s a peaceful man who knows the value of relationships and understands that life is a lot more than what goes on in Hollywood.

George Orwell: Biography, Manipulation of Language, and Totalitarianism
George Orwell wrote some of the most important works in the dystopian genre society. Learn about his ideas on totalitarianism and his life in this article! Read more »

Link copied!
Interesting Articles
Biographies
Michel Foucault: One of the Great Thinkers of the 20th Century