Junk Food and Its Negative Impact on Your Brain

Several studies have revealed the power we have over our brain’s health. We either use a healthy diet as a vehicle to boost it or we eat junk food and erode it. Read all about this topic in this article! 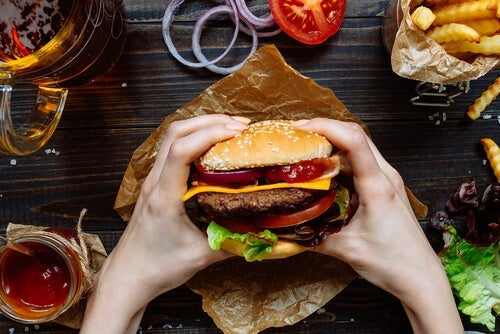 When you’re conscious about what you eat, you can care for your health. This is why it’s important that you understand how potentially harmful junk food is to your brain.

Because far from nourishing you, this kind of “food” erodes the functioning of your organism. Science discovered recently that high-calorie and low-nutrient foods hinder the proper functioning of your body and mind. Thus, in today’s article, we’ll analyze the effects that junk food has on your brain.

The journal Brain, Behavior and Immunity published a study conducted at the University of New South Wales, Australia that revealed that a diet high in sugar and fats impairs the brain’s cognitive ability.

The researchers noted that childhood is a critical period in this regard. This means that if a human follows a diet low in essential nutrients during the first years of their life, it’ll affect them a lot in the long-run.

“The food you eat can be either the safest and most powerful form of medicine or the slowest form of poison.”

The effects of junk food on your brain

The study conducted by the University of New South Wales found that junk food has harmful effects on the brain. To verify it, an experiment was conducted with two groups of mice.

One of the groups fed on high-calorie low-nutrient foods. Mainly on foods rich in sugar and saturated fat. Although the other group followed a healthier diet, they were allowed to consume sporadic sugar water, similar to a regular soda.

The results surprised the scientists. Just one week after starting the experiment, the first group of mice showed significant deterioration in the brain area related to memory. The disconcerting thing was that the second group also showed a deterioration almost as severe as the first group.

The evidence surrounding the harmful effects of junk food on the brain doesn’t stop there. Another study, published by the journal Cell Metabolism, shows that a group of American scientists came to the same conclusion in a different way.

The researchers started with the knowledge that the cells of the brain’s immune system, also called microglia or Hydrangea cells, become inflamed when high-calorie, low-nutrient foods are consumed. They discovered that, when this happens, the feeling of hunger also increases.

To reach that conclusion, they also worked with a group of mice. The doctors triggered microglia inflammation by artificial means. It made them more food than before. Also, they weighed about four times more.

You are what you eat

This statement is fully supported by science. The fact that what you consume influences your mental health gives us an unbeatable opportunity to be its architect. Isn’t that wonderful?

We know that low-nutrient and high-calorie foods generate physiological patterns that resemble those of an addiction. When you eat more of these foods, you also end up desiring them more. Thus, as with most addictions, the temptation of instant gratification beats the desire for long-term well-being.

Galen and other ancient doctors throughout history were convinced that food and good health go hand in hand. So much so that one of Hippocrates’ principles was: “Let thy food be thy medicine and medicine be thy food”.

When you eat, you either care for or affect your mental health. Thus, just as there’s evidence on the negative impact of junk food on the brain, a wholesome diet has positive health effects.

It’s not that difficult. Simply incorporate some healthy foods into your daily diet. The simple act of eating a handful of nuts a day is a good way to quench your appetite and care for your brain.

Foods such as bluefish, blueberries, oats, yogurt, chocolate, and avocado are also great for the brain. If you don’t like them, eat at least a small portion of one of them every day. Your brain will definitely thank you for it!

Your Brain Will Thank You for Eating Healthy
The greatest link between your body and the food you eat is not your digestive system, but your brain. Your diet directly affects it. Read more »
Link copied!
Interesting Articles
Healthy Habits
Six Ways to Increase Endorphins and Feel Better

Shinrin-yoku consists of delving deep into a forest atmosphere. It’s a therapy for liberating the tensions offered nowadays by urban life.…