Jorge Luis Borges: One of the Most Influential Writers of All Time

Jorge Luis Borges was an Argentine writer, essayist, and poet. Due to his blindness, for a good part of his life, he had the help of his friends and family to continue his literary work. 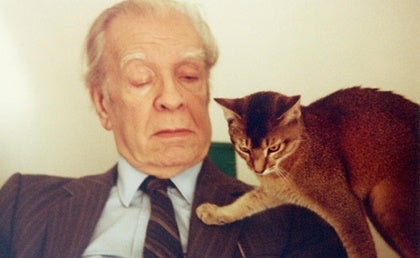 Jorge Luis Borges was an Argentine writer, essayist, and poet. We dare to say that his legacy is printed in every individual’s literary DNA. He was a master in all things words. As a matter of fact, he became the favorite writer of many scientists due to his prophetic spirit. He was, above all, an incredibly creative maker of stories, which is something we all can witness through the magical realism inside each of his works, such as, for example, The Aleph.

This writer’s work has had a great influence on universal culture. Because of this, he’s become one of the main references in twentieth-century literature. Thanks to his pieces of work, he won plenty of awards. Among his many recognitions is the Miguel de Cervantes Prize, the Commander of Order of Arts and Letters of France and even the Knights Commander of the Order of the British Empire.

“The sea is an idiom I can’t decipher.”

However, there’s one award he didn’t get the chance to obtain: the Nobel Prize in Literature. The people close to him commented that the reasons for this pointed to political issues. Some others, on the other hand, commented that his style was too cultured and fantastic to be granted this prize.

Not winning the Nobel prize didn’t matter too much to him, though. He had his own style – he knew it was unmistakable. Narration was his favorite genre.

The philosophical reflections he gives in each of his stories trace a unique and exceptional universe that no other author has surpassed so far.

Jorge Luis Borges was born in 1899 in Buenos Aires, Argentina. In his family, there were two very unique spheres: the military and the literary. On one hand, his grandfather, Francisco Borges Lafinur, was an Uruguayan colonel. On the other, his great grandfather and his paternal uncle were poets and composers.

His father, Jorge Guillermo Borges, taught psychology, which explains his exquisite literary taste. In fact, as Borges himself once said, it was he who revealed the power of poetry and the magical symbolism of words. Also, what most marked his childhood was precisely his father’s library. Actually, Borges spent most of his childhood submerged in this place.

“I have always imagined that Paradise will be a kind of library.”

He was very much ahead of his age. He learned to read and write when he was very young, perhaps due to the need he felt to enter that literary universe in which he lived. Now, outside the walls of that library and the family environment, his childhood wasn’t what you’d call “easy”.

Jorge Luis Borges was that boy who skipped two grades and who other children made fun of. He appeared to be a “weak link”, especially due to his stuttering.

Time of exile, time of creation

When World War I arose, the Borges family was in Europe. His father had just lost his vision (a disease that Jorge Luis Borges inherited later on) and they were in a clinic undergoing ophthalmological treatment.

The war conflict led them to travel continuously in Europe. As a consequence, they settled in Spain for a few years. In 1919, Borges wrote two books: The Red Rhythms and The Sharper’s Cards. As a result, he made contact with writers that became relevant to his later work, such as Ramón Gómez de la Serna, Valle Inclán, and Gerardo Diego.

Later, in the year 1924 and back in Buenos Aires, Jorge Luis Borges began to create countless magazines to testify to his ideas; of everything he learned, saw, and felt in Europe. His stories, essays, and poems turned him into one of the youngest and most promising writers in America.

During this period, you could define his style between avant-garde and cosmopolitan. However, later on, it became quite metaphysical. Little by little, he dove deeper into his fascination for time, space, the infinite, and life and death. In a short time, he became a master in these matters. He was obsessed with researching the matters in life where reality is mixed with fiction. Moreover, he wanted to inspire the reader to delve deeper into philosophical questions.

Blindness, the transition into another awakening

In 1946, Perón became the president of Argentina. This wasn’t good news for Jorge Luis Borges. People knew he was anti-Peronist and a follower of a more conservative kind of politics. Now, in the 50s, the Argentine Society of Writers named him president. Nonetheless, he quit the position a few years later.

His literary career marked all his obligations. He was being recognized in different places of the world. For example, his work Death and The Compass was being sold in Paris with a lot of success. At the same time, his essay called Other Inquisitions had become quite popular in Argentina. His key work, The Aleph, was in its second edition. Lastly, filmmakers were producing movies based on some of his stories, such as Days of Hate, which was based on his story Emma Zunz.

Now, in those years, an event changed his life forever. The Peronist government had been defeated after a military coup and Borges was appointed director of the National Library. It was at that very moment when the disease inherited from his father started making an appearance: he was going blind. He couldn’t read or write anymore.

Success despite the darkness

Despite his blindness, he continued working. His family, especially his mother, his wife, Elsa Astete Millán, and later his last partner, the Argentine writer María Kodama, were key in the creation of his literary work at this time. He continued publishing works such as the Anthology of Fantastic Zoology, Dreamtigers, and books of poems such as The Gold of the Tigers. He even collaborated with Harvard University for two years.

His artistic life was intense, rich, and very productive regardless of the darkness inside his eyes. Moreover, he requested his retirement as director of the National Library of Buenos Aires in 1973. He had dedicated almost 20 years of his life to that work.

Jorge Luis Borges died of pancreatic cancer in Geneva in 1986. He was buried in a graveyard in Switzerland, on a gravestone with a white cross with the following inscription And ne forhtedon na appears (Be not afraid) in reference to Ulrica, a Norwegian work of the thirteenth century which appeared in one of his stories.

The Importance of Poetry
The strangest thing just happened. A poet just won a Got Talent contest in Spain. Surrounded by songs and amazing act, poetry won the day. Read on and find out about Cesar Brandon, the unlikely winner. Read more »
Link copied!
Interesting Articles
Biographies
Edvard Munch: Paintings of Love and Death