"It's Called Calm": A Poem for Reflection from the Dalai Lama

"It's Called Calm" is a poem in which the Dalai Lama teaches us the value of quietening the mind and calming fears, worries and anxieties in order to appreciate the here and now and, thus, achieve personal well-being and fulfillment. 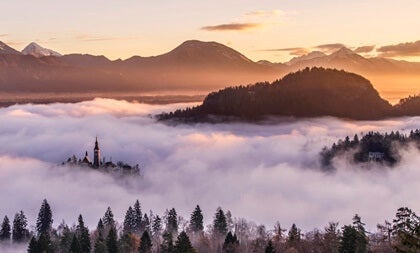 “It’s called calm and it cost me many a storm. It’s called calm and when it disappears… I go out searching for it again.” Thus begins one of the Dalai Lama’s best-known poems, which is also quite exceptional from an emotional and psychological point of view. After all, only when we find peace of mind can we think and act with greater clarity, accuracy, and harmony.

Paul Ekman is one of the closest people to the Dalai Lama, and is also one of the most highly-respected people in the world of psychology. He’s considered one of the pioneers in the study of emotions, and he often mentions in his conferences that his friendship with the spiritual leader of Tibetan Buddhism was a transforming experience for him.

It made him see, among other things, that the essence of different places and even of life itself don’t usually dwell in people who are too hasty or rushed. Haste, worry, envy, fear, or anger can cloud our reason and hinder the path to happiness.

Because, whether we like it or not, calm is everything. It’s a pool of crystalline waters where the moon and the stars can dance. It’s also where you find psychological balance.

A relaxed mind and a quiet heart respond better to the difficulties of life. However, that feeling, that subtle inner balance, isn’t something we can achieve overnight. As the Dalai Lama himself explains, neither a special season nor an enlightened mind appear in a single day. We need to get rid of many things.

“It’s Called Calm”, a poem from the Dalai Lama

Calm is one of the most complex, complete, and difficult to achieve emotions. This is something that psychologist Paul Ekman knew perfectly well.

However, something that the Dalai Lama taught him is that inner peace and serenity of mind are also an impulse for ethics, and for respect between people. “It’s called calm and the world avoids it, ignores it, inventing wars that no one will ever win”.

As a result, those who lack that calm rarely grasp the consequences of their actions. It’s difficult for them to offer well-being and respect to others if there’s an excess of noise inside them, and if there’s an excessive burden of adverse emotions. We are, in a way, a society that has stopped enjoying silence. It’s a society that has let itself get trapped by anguish, anxiety, and fear.

No society can move forward if it isn’t able to cultivate two basic nutrients: calm and compassion.

A calm person is like a tree that gives shade

You may well know someone like this. Someone who’s discreet, calm, and always focused. They’re people who radiate peace and with whom everything seems so simple. Day to day life becomes peaceful by their side, and they help to calm down our insecurities and stress and even extinguish our worries.

People with inner calm are like those great redwoods of ancient beauty that offer shade and wisdom at the same time. However, in addition to admiring them, it never hurts to actively imitate their attitude, their way of life, and their peace of mind.

One way to reach that state is through mindfulness. Studies, such as that conducted by Dr. Brown, KW, and Dr. Ryan, RM (2003) and published in the Journal of Personality and Social Psychology, indicate that this practice allows us to manage our emotions better. It allows us to create greater psychological well-being.

Calm isn’t just learning to live in peace, it’s knowing how to move in peace in the midst of crisis and adversity.

Calm isn’t just a state of mind. One thing we know about emotions is that they have the power to condition our thoughts and actions. So, one thing to understand about the Dalai Lama’s poem is that it isn’t just a simple set of verses to reflect on. It’s an invitation to take action.

You need to become aware that working on your inner calm is a strategy to help you improve your actions. At the same time, you’ll acquire valuable strategies to face difficult situations. It isn’t enough just to make use of inner serenity in order to live in peace.

Calm is the quality that will allow you to move with greater poise in the midst of chaos. It is, in turn, an anchor that will help you make better decisions, a rudder that will guide you as to how to overcome adversity with adequate resources.

A lesson in wisdom

Calm in the Midst of Chaos
In the midst of all the chaos, calm. Amidst the fear and murmur that comes with uncertainty and panic, calm. How can we feel calm in the midst of chaos? Read more »
Link copied!
Interesting Articles
Philosophy and Psychology
Eight Unforgettable Yoritomo Tashi Quotes