Some facts about motherhood are a reminder of just how special mothers are. Read on to discover them! 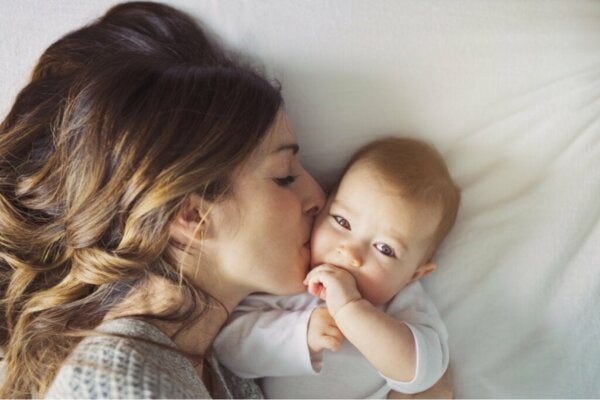 Several interesting facts about motherhood speak of just how dedicated a woman needs to be to embrace motherhood. Also, of the many joys that are implicit in motherhood.

Mothers play a particularly important role in childhood. They’re not perfect, because no one is, but they’re usually the symbol of perfect love for children. They’ll be their role model. Continue reading to discover some interesting facts about motherhood.

“Whether your pregnancy was meticulously planned, medically coaxed, or happened by surprise, one thing is certain — your life will never be the same.”

Interesting facts about motherhood and pregnancy

Science has established that there’s a migration of fetal cells into the mother’s body during pregnancy. This is one of the most interesting parts of motherhood that experts don’t yet understand. What’s certain is that several fetal cells end up in the mother’s heart. This phenomenon is called “fetal microchimerism”.

Another interesting fact about motherhood is that the brain of a pregnant mother undergoes important changes. One of the most prominent is the transformation of the areas related to empathy.

In addition, most mothers gain about 27 pounds during pregnancy and one in 32 can give birth to twins. Furthermore, one in 532 pregnant women gives birth to triplets. Vassilyev is the Russian woman who holds the record for giving birth to the most children. She gave birth to a total of 69 children.

There are several interesting facts about the first years of a child’s life. An average mother changes about 7,300 diapers and washes about 5,000 garments from the moment of birth until the child turns one year old. Estimates indicate that they look at their children about 320 times a day.

Mothers with young children are the most active on social media, according to a study published in Science Daily. This means that more than half of all online purchases associated with mothers and their children are based on recommendations from “momfluencers”.

The word “mom” begins with an “m” in most languages. Apparently, this letter is easier for most babies to pronounce. Many mothers think they’ll stop having influence over their children once they grow up. This isn’t true. In fact, teenagers tend to relate to others just as their mothers do.

This holiday is celebrated in most countries around the world. In fact, it’s the third most popular holiday, after Christmas and Easter. It began to be celebrated in 1872, on the initiative of pacifist and writer Julia Ward Howe.

Most children around the world celebrate Mother’s Day by giving their mothers flowers and cards. Many also bring them breakfast in bed. Many mothers particularly appreciate the gifts their children make with their own hands. Also, those that involve spending time together, such as a trip or a walk.

Another interesting fact is that the countries where the word “mom” or “mother” is most searched in Google, especially on Mother’s Day, are Mexico, Chile, and Peru. People search for songs and poems to honor their mothers.

Interesting facts about motherhood in other animal species

The interesting facts about motherhood aren’t limited to the human world. In fact, animal mothers also have their own. For example, the most “progressive” are the same ones who supposedly bring babies from Paris: storks. Both male and female storks care for the chicks.

Mother elephants nurse their young for up to five years. These animals function collectively, meaning the younger elephants take turns caring for the calves. It’s a way to help the mother elephant and prepare for motherhood.

Another interesting fact about motherhood in other species is found in orcas or killer whales. These animals can nurse their calves for up to 15 years. Older orcas assist younger ones when they give birth. In turn, gazelles hide their young while they go out to distract predators.

These interesting facts about motherhood are a reminder of those feelings of tenderness and protection in mothers. Every living being depends on them to live, grow, and become strong. This fact alone makes them wonderful beings.

I Love My Children, but Hate Motherhood
They love their children. Yet motherhood or the experience of raising a child has turned out to be unsatisfactory and frustrating for many of them. Read more »

A form of psychological abuse is often linked to relationships. It's the kind of mistreatment where one person tries to…