Scarlett O'Hara is one of those characters in the history of cinema that remain engraved in the viewer's retina. She's timeless. Today's article will approach some of the most interesting facets of the star of Gone with the Wind. 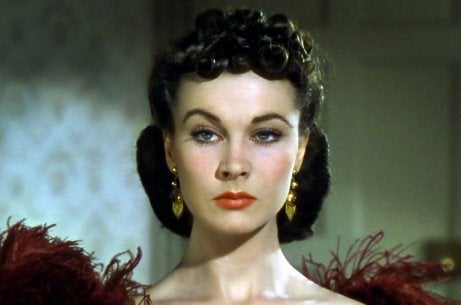 A rather expensive production, an actor like Clark Gable, and a character like Scarlett O’Hara and her fancy costumes weren’t seen before. The premiere of Gone with the Wind, directed by Victor Fleming, made cinema history in 1939. Movies were quite popular back then, as television was still in its early stages of development.

There was so much fuzz over it, as there were many promotional events to celebrate the film’s premiere in Atlanta, a parade, balls, and many others. The state of Georgia held many festivities prior to its premiere. In fact, the government made December 15, 1939 a statewide holiday. Thus, Gone with the Wind began to build a myth that would lead to 10 Academy Awards. In short, it was unforgettable. The movie didn’t premiere in other countries until many years later but its success was equally overwhelming.

The film is now a classic. In fact, various authors have analyzed its impact from various perspectives. It’s true that the values portrayed in it are somewhat outdated, especially the stereotypes about slavery and the values of the era. This is partly because Gone with the Wind isn’t only a film from 1939 but takes place in the 19th century.

Scarlett O’Hara, played by Vivien Leigh, is a rather timeless character. She’s one of the most memorable female characters in the history of cinema. Who could forget the crafty, dazzling dress she makes with the house curtains, her obsessive love for Ashley Wilkes, and her explosive relationship with Rhett Butler?

Neither a heroine nor a lady in distress

The magnitude of the film and its length, about four hours, allow the viewer to witness the evolution of a character without precedent. The character of Scarlett O’Hara is a vain, selfish young woman, aware of her beauty and with an ability to get what she wants. She belongs to an affluent family but isn’t satisfied with her role in society.

Scarlett breaks every mold of her time in both the novel of the same name and the film. She isn’t submissive, she doesn’t allow men to manipulate her, and she isn’t about to live under their shadow. Thus, she’s no heroine because her values are far from the moral dictates of her time. Instead, she’s quite greedy and selfish. She’s no lady in distress and, thus, doesn’t need a man who can rescue her. In the face of adversity, Scarlett O’Hara is a strong, determined woman who’s quite capable of looking after her family.

Scarlett is irreverent and not even her mourning quenches her desire to enjoy herself as any man would. O’Hara can handle anything because she’s a force to be reckoned with. Thus, no man is above her at a time when feminism wasn’t even a thing yet, when women belonged in their homes. This lady is neither nice nor endearing and she doesn’t care to be. She’s quite the contrary. In fact, she’s arrogant and highly independent. Not even war defeats her.

She’s quite selfish indeed. The viewer knows she’s in love, even obsessed, with Ashley Wilkes, her cousin who marries Melanie, a woman who’s basically the opposite of her. Yes, her rival is naive, sweet, and adorable. So much so that the viewer may wish to shake her and wake her up from that fantasy world she seems to live in. She basically doesn’t understand malice and fails to realize that Scarlett doesn’t care about anyone but herself and doesn’t care about breaking a marriage.

O’Hara’s relationship with Melanie develops throughout the film. Then, another love triangle begins to develop when Rhett Butler comes into the picture. Scarlett likes challenges and Ashley is a major one. Similarly, Butler is a businessman of dubious morality who falls for the rather devious young woman. Then, war begins and puts an end to the privileged life of Scarlett and her family.

Surprisingly, she takes over and saves her beloved Tara, the family plantation, and takes care of the people around her. They wouldn’t stand a chance without her. She married her sister’s rich fiancé and immediately became a widow. This would’ve been devastating for a woman of that era. However, Scarlett managed to get ahead and became an entrepreneur in a male-dominated world. Then, like the phoenix, she rose from the ashes time and again.

This woman is outstanding for her time. Cinema had already provided audiences with an endless number of obedient women who set the example of what a “real” woman should be. These types of women must have no personal goals other than being devoted to their families. Thus, the protagonist of Gone with the Wind is the true queen of her story. This is because the men and the rest of the stories merely revolve around her.

Scarlett isn’t a “good” mother and wife. Practically all of her actions are driven by her own interest. O’Hara must conform to a world dominated by men as much as she can. For instance, she realized that Rhett Butler is an opportunist, but one she could definitely outdo. Ambition drove their actions but there’s more to each one of them.

For instance, she was compassionate, protective of her own, and quite decisive. In contrast, Melanie is quite sharp despite her naivety. She’s kind, above all, and is always grateful to Scarlett for helping her survive, for resurrecting a family legacy that was about to disappear.

The young and flirtatious Scarlett, whom the viewer met at the beginning of the story, vanished as it progresses. A raggedy version gets down on her knees and finds nourishment in a land that seems to be condemned. However, she took care of everyone around her and confronted adversity. Nothing can stop her, not even scarcity. Thus, she got creative with the curtains when she didn’t have the dress she needed to visit Rhett Butler and impress him — to get what she wanted.

The viewer witnessed her descend to hell on earth throughout the film. She doesn’t allow anything, absolutely nothing, to bring her down. Her arrogance and ambition manifested as absolute coldness, even though, deep down inside, the blows were quite devastating. Scarlett wore a suit of armor and it kept her safe. Only when Melanie died did she finally realize the pain she caused. At that moment, she began to value love and goodness.

Scarlett O’Hara is a timeless, interesting character who’ll always deserve a more in-depth analysis. It’s one that reveals the evolution of adolescent happiness to the maturity of a woman who had to overcome adversity and is still in one piece. You may love or hate her but she’ll definitely make an impact on you. She’s indomitable, proud, beautiful, flirtatious but, above all, a warrior, a true survivor who didn’t allow defeat.

Hollywood: Re-Imagining Well-Known History
Hollywood is one of those series that critics can't agree on. In this re-imagining of well-known stories and people. Read more »
Link copied!
Interesting Articles
Cinema, Television, and Psychology
HAL 9000: Intelligence and Evolution