Intelligence in the Animal Kingdom: Ravens

Research about intelligence in the animal world has given us fascinating insight into one of the smartest animals: ravens. These remarkable birds are able to plan, build tools, and use logic to solve problems. 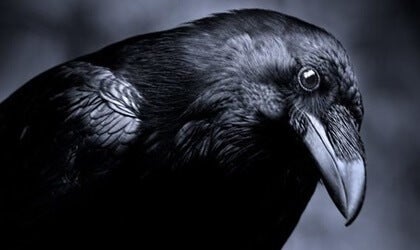 Research has shown that ravens (more specifically, birds of the Corvidae family) are one of the most intelligent animals. Surprising as that may be, their ability to plan, create tools, and suppress their impulses to gain greater benefits puts them at the same cognitive level as apes. In today’s article, we’ll learn more about these enigmatic and fascinating creatures.

When Edgar Allan Poe published his poem The Raven in 1845, he chose to place his prophetic animal on the bust of Athena, the goddess of wisdom, strategy, and the sciences. His choice wasn’t just a coincidence. Poe’s genius created one of the most revealing and memorable poems in the history of literature.

People have been interpreting ravens and crows as bad omens for centuries. It’s not just their color that people find unsettling. Their undeniable intelligence is unnerving, not to mention the fact that some ravens can even learn to articulate a few words when they’re in contact with humans.

In Lewis Carroll’s Alice in Wonderland, The Mad Hatter asks Alice: “Why is a raven like a writing desk?” The book never gives an answer, though Lewis Carroll did answer the question himself later on: “Because it can produce a few notes, although they’re very flat and it’s never put with the wrong end first”. Maybe Carroll should have asked a different and much more interesting question: “Why is a raven like a human?” The answer to that question will surprise you.

Research shows that ravens are self-aware, capable of logically solving problems, and able to build tools.

Intelligence in the animal kingdom: the fascinating brains of corvids

Everyone knows that primates are one of the most intelligent species in the animal kingdom. However, years of living side-by-side with corvids (ravens, crows, magpies, etc.) gives us countless examples of their human-like intelligence. In fact, a study from Lund University published in Science magazine shows that the cognitive processes of ravens are comparable to that of an eight-year-old child.

Birds in the Corvidae family are one of the few animals who are fully self-aware. In fact, magpies have always fascinated scientists for one reason: they recognize themselves in mirrors. Researchers at Goethe University, for example, put a small sticker on the magpies’ feathers. When the magpies looked in the mirror and discovered the “anomaly”, they proceeded to remove it with their beaks.

Not only that, but scientists have discovered that ravens form complex social bonds with clear leaders. They also make decisions as a group to solve problems, look for food, or even commit “murder”. Sometimes, the group will decide to off one member if they believe the bird isn’t respectful or useful in their little society.

Ravens and other corvids are among the most studied due to their intelligence. For example, the Institute of Medical Psychology and Behavioral Neurobiology at the University of Tübingen published a fascinating study years ago about the brains of ravens.

In spite of the fact that ravens don’t have a neocortex like ours, they have an area called a nidopallium caudolateral that shares similarities with the prefrontal cortex. The neural density of this structure is immense. The study showed that corvids are capable of more advanced thinking and have the ability to carry out executive functions.

In fact, a classic example is that of ravens in Japan. There, ravens have learned to do the following: they take nuts into the crosswalk when they have a green light, wait until the cars pass and crush the nuts, and go back for them when the light turns green again. David Attenborough himself talked about this example in the following documentary clip:

When we’re talking about intelligence in the animal kingdom, the inevitable question arises: what do we mean by intelligence? Is an animal intelligent only if it displays original behavior when looking for food or if it displays human-like behavior? Well, scientists have established that in addition to executive functions, we should also look at two other elements: the ability to construct tools and the ability to repress instincts.

Ravens have both of these abilities. For example, researchers have observed that ravens have a high level of self-control. They’re able to repress their instincts and put off rewards if they know that better ones will come later. In addition, another study from Science magazine showed that crows build “sophisticated” tools to get food: they make hooks and pullies and know how to use rope.

What fascinates scientists the most is that ravens don’t need to learn through trial and error. They observe first and know exactly what to do from the beginning. This is quite impressive. In fact, one of the foremost experts in corvid intelligence, Dr. Joshua Klein, has seen these birds save the coins that they find and then put them into vending machines to get food.

In conclusion, there’s still so much to learn about intelligence in the animal kingdom. The possibilities for research are endless as we learn more about the species that share the planet with us. Ravens and other corvids watch us from high above, observing and quietly learning about our behavior for their benefit. What will future research teach us about these fascinating animals?

The brain has been the protagonist of the last decades. Academics from all over the world, and from different disciplines,…