Hysterical aphonia is a rare form of functional dysphonia. It usually disappears without any treatment. It's more frequent in young women and it can be related to a past personal conflict, which can sometimes be hard to identify. 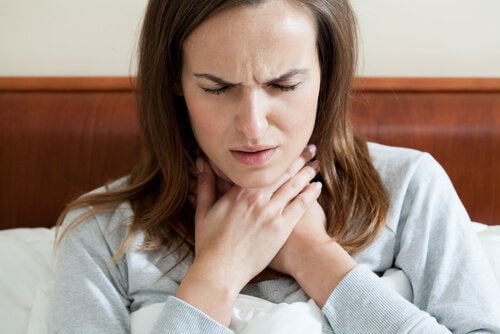 Hysterical aphonia manifests as a result of a fear of speaking or singing, psychological trauma, an ongoing voice disorder, long-term treatment failure, emotional blockage, or the unconscious desire of getting other people’s attention. In short, there are many possible causes but they all lead to the same result: the person who suffers from it thinks they can’t talk. It’s more common in women or young people.

Hysterical aphonia starts abruptly and can manifest with some degree of whispering. On a physical level, the pharynx seems to have an absence of reflexes (areflexia), and the larynx is normal in structure but the vocal cords don’t move correctly.

If the patient tries to emit a sound, there’s mild adduction between the arytenoid cartilage and abduction of the air coming into the respiratory tract. But vocal cord mobility during laughter and coughing is normal.

From hysterical aphonia to conversion aphonia

Have you ever suffered from the following symptoms?

Have you ever experienced a crisis or convulsion? Do the symptoms manifest when you start feeling anxious? Do you suffer from a neurological disease or any other type of illness? Are these symptoms affecting your life to some degree?

Although the term “conversion” (which describes what people used to call hysteria) has been used since the Middle Ages, Sigmund Freud made it popular. He believed that unconscious problems manifested as physical symptoms.

Conversion disorder was a popular diagnosis in the late 20th century. It refers to the symptoms that affect behavior and seem like a neurological disease, but have no organic cause, nor can be explained by similar physical conditions.

“I had no voice to talk with because she was my whole language.”

A brief description of conversion disorder

Conversion disorder is characterized by symptoms that affect sensory or motor functions, which can make the patient feel like they have a physical condition that’s causing the alterations, such as a neurological disorder. On the other hand, although there isn’t a physical cause or the lab tests come back normal, the symptoms do appear involuntarily.

Conversion symptoms are in part the result of what the patient thinks of the illness itself and, in fact, they may also require medical care. At the beginning, psychological factors are involved, so the disorder can appear due to conflict or stressful situations.

Sometimes, this disorder won’t go away due to certain direct and indirect behavior. Direct behavior involves, for example, ignoring the psychological conflict that causes it, which temporarily reduces anxiety. Indirect behavior can be not going to work, not facing certain responsibilities, etc.

Conversion disorder usually manifests in the last years of adolescence and in the first years of adulthood. It’s very rare in children under the age of 10 or people over 35. It manifests suddenly and hospitalized patients’ symptoms disappear within 2 weeks approximately.

Relapse isn’t uncommon, especially after the first year, and even just one relapse is a certain prediction of future episodes. Symptoms such as shivering and convulsions indicate that the condition might not be responding to treatment or therapy.

“I have cultivated my hysteria with pleasure and terror.”

It’s essential to eliminate or reduce the cause of stress. Another good way to approach this disorder is by working through the patient’s trauma, which eventually reduces tension.

It’s also necessary to remove all the “rewards” that the patient obtains through that behavior, even if they’re unaware of said benefits.

Sometimes, the symptoms automatically go away, going from lasting days or weeks to disappearing entirely. However, several resources that may be of great help:

What Does Your Tone of Voice Convey?
Tone of voice is one of the most influential elements of communication. Some revealing factors are: timbre, volume, speed, clarity, projection, etc. Read more »
Link copied!
Interesting Articles
Psychology
The Inspiring Legend of the Boy and the Starfish - a Story about Perseverance

Psychology
Things Are Simpler than They Seem (Lateral Thinking)

Multiple Sclerosis (MS) is a chronic disease of the central nervous system. It exists all over the world. It is…

Psychology
Explore Your Dark Side to Regain Control of Yourself