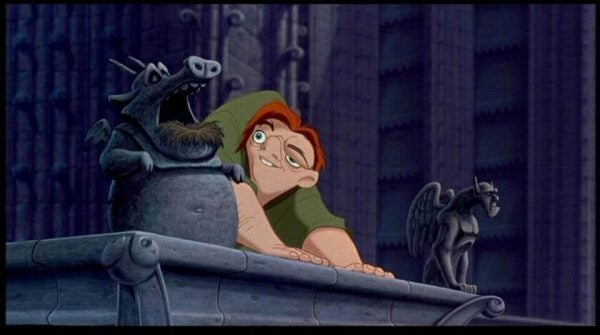 The Hunchback of Notre Dame (1996), despite being a Disney movie, has a dark plot that can be difficult to process. I don’t mean a “dark” happiness like The Nightmare Before Christmas, nor the terrifying darkness of The Black Cauldron, one of Disney’s less known films. The darkness of The Hunchback of Notre Dame has nothing to do with this. It’s different, real, and raw. That’s probably why many 90’s kids didn’t really appreciate it back then.

This is a well-known movie that received good reviews, made a good profit, and had really good publicity. However, when it came out, most of us were too young to really understand it. Maybe that’s why this movie isn’t in Disney’s top 10 films of all time.

For this reason, it wasn’t very popular among children. On the contrary, it’s as if people forgot about it. Although there are many Disney films that hide a dark plot and an analysis-worthy background, The Hunchback of Notre Dame is far from the Disney stereotype. It’s story loaded with criticism of society and power, especially regarding the Church.

This movie is based on Our Lady of Paris, a novel by Victor Hugo that was published in 1831. This produced rejection among the writer’s followers, since they were expecting a darker novel, faithful to the original. But, as expected, Disney made this mild (ish) movie so kids wouldn’t leave the movie theater. Despite their effort to transform this story into a sweet one, it was obscure enough for many kids not to understand it at that time.

There are two other (rawer) adaptations of this novel that are also called The Hunchback of Notre Dame, filmed in 1939 and 1956. From an adult perspective, we can see this is a great animated film with fascinating scenarios and a surprising and captivating message.

-Laverne, The Hunchback of Notre Dame-

The ecclesiastical in The Hunchback of Notre Dame

The main difference regarding Victor Hugo’s original novel is Judge Frollo. In the original version, Frollo is the archdeacon of Notre Dame, but he’s a judge in the Disney version. This is completely understandable, as it is a movie for children.

Even though they presented Frollo as the judge, his character is linked to the cathedral, he has strong religious beliefs and his attire is quite ecclesiastic. This discredited the image of the Church a bit.

Frollo should be a man of law, a respectable and fair character, but he’s actually quite the opposite. We see his ruthlessness, his arrogance, and how he despises those who are different from. Frollo hates gypsies and everyone who isn’t like him. However, life will mess with him and he’ll end up experiencing emotions he never thought he could.

Frollo begins to become obsessed with Esmeralda, the gypsy. His feelings towards her aren’t healthy. She becomes a precious and tempting object, like the “embodiment of evil“. Suddenly, Frollo gets a sick desire that makes him consider his faith. Frollo believes his desire for Esmeralda is a test from God and that he must avoid sin. However, his desire becomes so obsessive that he eventually wants her to be his property, or else, she must die.

Frollo’s obsession will lead to one of Disney’s most disturbing musical moments. A song in which religious connotations are obvious from the beginning: ecclesiastical choirs, a huge crucifix, Frollo’s attire. Realizing all of this as adults makes us think that Frollo might not be just a judge, but he might be linked to the Church.

This musical moment is vital for us to better understand this character. He’s a cruel and ruthless judge who imposes his law sentencing innocent people and also hides something else. Frollo is a very disturbing and uncomfortable character. His irrational and obsessive desire towards Esmeralda is almost more terrifying than anything else in the film. Behind his puritan and correct image, lies a man with very questionable morals.

Victor Hugo’s novel is ruthless rather than compassionate. On the other hand, The Hunchback of Notre Dame is more sugar-coated and less controversial, making it easier to digest for the general public. Through the character of Frollo and said musical scene, we get a peek of the original story: a trace of the harsh criticism to the Church and its undeniable power.

What’s different in The Hunchback of Notre Dame

Beyond the criticism to society and the Church, The Hunchback of Notre Dame also deals with issues such as difference and acceptance. People don’t link kindness to people’s image. We have a cruel judge and an innocent, good-hearted character whose image is unpleasant for most people. Society doesn’t accept Quasimodo because of the way he looks. This is why he only dares to exit Notre Dame on “the day where everything’s backwards”. On this day, there’s a kind of carnival where people celebrate all things strange.

-Quasimodo, The Hunchback of Notre Dame-

Quasimodo’s “costume” fascinated the public. If they knew he actually looked like that, they would all see him as a monster. Only one character shows compassion towards Quasimodo; Esmeralda, the young marginalized and persecuted gypsy. Esmeralda is a fighter. She’s the only one who dares to face Frollo and ask for justice and equality for all.

Frollo made Quasimodo feel incredibly insecure, leading Quasimodo to see himself as a monster. Quasimodo established some kind of friendship with the gargoyles in the cathedral. Esmeralda and the gargoyles open Quasimodo’s eyes and make him see reality. In addition, Capitan Febo, a soldier who turns his back on Frollo, also plays an important role, joining the fight for equality.

Who’s the real monster in Notre Dame? The film shows the monster’s true nature, a camouflaged monster who walks among us day by day, enjoying society’s respect. The Hunchback of Notre Dame is a film we must rescue. In brief, its plot is more complicated and darker than your typical children’s movie, but it’s also full of amazing values, advocating for justice and equality.

Mulan: A Great Example For Women
The values ​​of the traditional family say that the man is the hero and the woman is relegated into second place. These rules are firmly established, but Mulan doesn't seem to fit completely into them. Read more »
Link copied!
Interesting Articles
Cinema, Television, and Psychology
This Short Will Teach You The Charm Of Being Different