Hubris syndrome was first described by ex-politician David Owen and psychiatrist Jonathan Davidson. It's associated with excess power, and symptoms usually abate when the individual no longer holds that power. 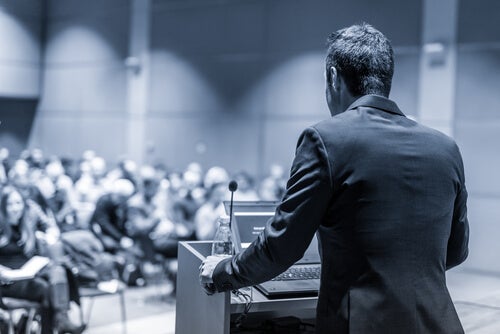 People who suffer from hubris syndrome change their personalities when they find themselves in leadership positions. This can happen in business, politics, or any other field where hierarchies exist.

In fact, people with hubris syndrome display extreme pride, excessive self-confidence, and total contempt for others. These character traits lead to impulsive and often destructive behaviors.

No evidence points to a neuroscientific explanation of hubris syndrome. In other words, the brain of a person with hubris syndrome doesn’t show any physiological alterations.

The term hubris or hybris (ὕβρις, hýbris) is a Greek concept that means “excess”. It’s the opposite of sobriety and moderation. The Greeks described a hubristic person as excessively prideful and someone who treated others with insolence and contempt. Thus, the person gets pleasure from using their power in that way.

David Owen, a minister to James Callaghan’s Labour Party, and psychiatrist Jonathan Davidson have researched hubris syndrome. Owen argues that people often consider hubris syndrome a natural (or at least somewhat expected) extension of the confidence and ambition anyone who desires power needs to have. While many believe that arrogance is often an unfortunate trait in leaders, they also believe that a certain level of arrogance is simply the price you have to pay for great leadership.

Power is a strong drug, and not all leaders have a strong enough character to counteract it. Doing so requires a combination of common sense, humor, decency, and skepticism. Cynicism is also important because it helps you see power for what it is: a privileged opportunity to influence and often determine the outcome of the situations that are happening around you.

More specifically, Owen described hubris syndrome as a unique and acquired personality disorder that develops only after a leader has power for a certain period of time. It’s also important to note that it’s only applicable when there’s no history of psychiatric conditions.

Here’s a selection from David Owen’s list of 14 symptoms of hubris syndrome:

Owen and Davidson analyzed the psychological profiles of British prime ministers and presidents of the United States from the last 100 years to find examples of hubristic traits.

They found that seven U.S. presidents showed definite signs of arrogance: the two Roosevelts, Woodrow Wilson, John F. Kennedy, Lyndon B. Johnson, Richard Nixon, and George W. Bush. However, the only president who they believed had this syndrome was George W. Bush.

Among the prime ministers of the United Kingdom, Owen and Davidson believed that Herbert Asquith, David Lloyd George, Neville Chamberlain, Winston Churchill, Anthony Eden, Margaret Thatcher, and Tony Blair displayed excessive pride and arrogance. However, to them, only David Lloyd George, Neville Chamberlain, Margaret Thatcher, and Tony Blair check all of the boxes for hubris syndrome.

Not only politicians suffer from it

Prime ministers and presidents were easy to study due to the extensive biographical information available about them. However, hubris syndrome doesn’t exclusively affect politicians. In fact, it’s about power. Consequently, anyone in a power position, such as a CEO of a large company, can also suffer from this syndrome.

The great Bertrand Russell wrote about the phenomenon of what happened to the mental stability of an individual when they’re in a position of power. He described the causal link between power and aberrant behavior. He called it “the intoxication of power”.

This leads to the idea that honorable, moral people can become corrupt after years of accumulating power. That’s why it’s so important for members of developed societies to keep these people under control with systems that limit the power that any one person can hold.

The Favourite: A Royal Power Struggle
The Favourite isn't a typical period film; it's a film that draws on a historical fact and tells it from another perspective. Read more »
Link copied!
Interesting Articles
Illnesses
Huntington's Disease - Characteristics and Signs

Epilepsy is a disease of the central nervous system (CNS). A temporary disruption in your neurons breaks the balance between…