Exercising is one of the healthiest habits you can have. However, there are times when people become obsessed with it and push their bodies to their limit without considering that there's a negative side to it all. Today, we'll talk about them and tell you how overtraining makes people more impulsive. 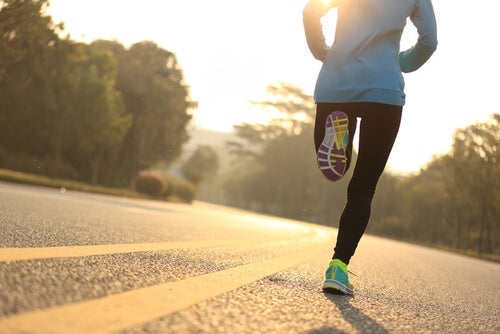 Exercising has many benefits for your body and mind. It improves your fitness level, strengthens your muscles, tones your skin and, in addition, it’s great for your cardiovascular system and even for your cognitive ability. However, overtraining makes people more impulsive and can have negative consequences.

There are many problems you could have when you overtrain with little rest in between. For one, exercising can become an addiction. Other common disorders are muscle dysmorphia and addiction to running. Also, it could also lead to muscle injuries, cardiac and respiratory problems, worsening of the immune system, joint aging, and overtraining syndrome.

Occasionally, sports training goes a little bit too far and escalates into overtraining or staleness syndrome. The syndrome is similar to work burnout and there’s a sharp drop in athlete performance, even when they rest. It manifests with a series of physical and psychological symptoms.

You can differentiate between physical and mental overtraining just by looking at the symptoms:

The physical and physiological symptoms that may manifest with this syndrome are:

In addition, the following psychological symptoms may occur:

In addition, in a recent study, it was discovered that excessive training can lead to increased impulsivity. This fact doesn’t affect this trait simply, but it can have very negative consequences on behavior and health.

Impulsivity is a trait that leads to acting quickly, unexpectedly, and excessively when faced with internal or external stimuli. Therefore, the person acts without thinking nor considering the consequences.

This past September, a French research group published an investigation about the consequences of excessive training on impulsivity. Specifically, how overtraining affects cognitive control.

To do so, they recruited a total of 37 triathletes, which they divided into two groups: the training overhead and the control group. Thus, 19 of them increased the duration of training by 40% in each session for three weeks while the other 19 trained as usual during the same period.

Thus, after the experimental weeks of training (of usual or overloaded intensity), the participants went in for an evaluation session. Researchers divided these sessions as follows:

Thus, the researchers observed the excitability of the cerebral cortex, the performance in specific tasks, and the preference for immediate or delayed rewards.

What did they find?

The researchers were interested in cerebral cortex activity related to impulsivity and the results in the task of temporary decisions. Cognitive tasks were included, mainly, to activate said brain area.

When comparing the brain activity after 45 minutes of acute exercise with the activity in the first part of the session, they found a decrease in the activity of the lateral prefrontal cortex during decision-making, not in cognitive performance.

What this means is that overtraining has a negative effect on subjective decision-making tasks, consuming resources and hindering them.

Also, they observed that overtrained triathletes showed a greater preference for rewards of lesser amount, but earlier in time in that same task when compared with the control group and with their own level prior to overloading.

These results are relevant in several ways:

In conclusion, as with most activities, accumulated fatigue due to overtraining can have a negative impact, both in the short and long term. Thus, it’s important to adopt healthy habits that include learning to make appropriate decisions and knowing not to push your body and your mind beyond their limits.

Overtraining Syndrome: When Exercise Becomes Dangerous
Everyone knows that exercise is a fundamental part of being healthy. However, balance is key. Exercising too much can lead to overtraining syndrome. Read more »
Link copied!
Interesting Articles
Research
The 97 Previously Unknown Areas of the Brain