Oxytocin does everything from encourage maternal and paternal feelings to increase trust and sexual intimacy. Psychologist Marcelo Ceberio tells us more about the "love hormone". 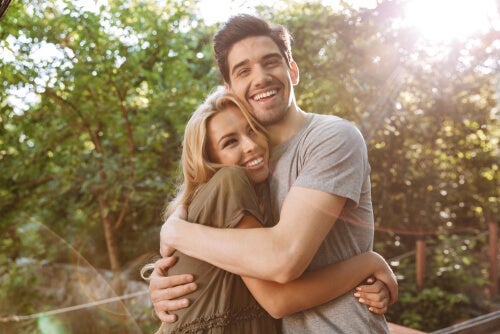 Oxytocin plays an important role in your bodily functions and your behavior. It’s a neurohormone that provides wonderful benefits to your body and emotions. Oxytocin is called “the love hormone” because it’s responsible for so many of the things that make you feel good. It’s crucial for social bonding of all types (romantic, platonic, familial), sexual reproduction, and birth. There are many benefits of oxytocin. Keep reading to discover them!

Oxytocin, romantic love, and the search for intimacy

The hypothalamus produces oxytocin; then, the pituitary gland is responsible for secreting it. Oxytocin is the superstar of parent-child relationships because it promotes bonding from the moment the child is born.

Oxytocin stimulates maternal feelings, as well as birth and lactation. When the birth canal widens, the pituitary gland releases large amounts of oxytocin. The same happens during breastfeeding when the baby latches onto the nipple.

The love hormone also plays a role in physical affection and orgasm. Once oxytocin is released into the bloodstream, it produces a series of effects after the sexual act. The sexual climax in women and men triggers the release of oxytocin, which facilitates the circulation of sperm and muscle contractions in the reproductive channels of both sexes.

Studies also show that, after sex, when the testosterone and endorphins present in semen are still on the cervical wall, women receive testosterone, endorphins, and oxytocin. On the other hand, men experience an increase in endorphins and oxytocin, which triggers feelings of relaxation and protectiveness.

Oxytocin is also associated with relationships, recognition and appreciation, building trusting, generous relationships, affection, tenderness, and physical touch. In other words, a simple hug, caress, or kiss can activate oxytocin.

Some people call oxytocin the monogamy hormone. In a study from the University of Bonn, researchers administered oxytocin or a placebo with a nasal spray to a group of heterosexual men. The goal was to study how they reacted when meeting an attractive woman. They asked the participants to indicate what they thought was an appropriate distance between them and the woman and what distance was uncomfortable.

Researchers discovered that the volunteers who were either married or in a relationship and received the hormone preferred to stay a greater distance away from the woman than those with the placebo. However, the same thing didn’t happen with single participants. The authors proposed that the study provided the first evidence that oxytocin might play a key role in male fidelity.

The benefits of oxytocin for parenting and families

Oxytocin also regulates the loving behavior of parents towards their offspring. It’s the attachment hormone; it triggers the instinct to protect the fetus and promote its growth. For example, when a mother breastfeeds her child, oxytocin signals the mammary glands to send milk to a collection chamber, where it’s available for the nursing infant to extract from the nipple.

The sound of a mother’s voice also activates oxytocin production in the baby, which plays an important role in the bonds of attachment between mother and baby. The mother’s voice can soothe the baby and make them feel protected.

Some studies show that people in love have elevated levels of oxytocin, especially in the more mature stages of the relationship.

Its function is associated with physical contact and orgasm. It triggers maternal and feminine feelings that provide sensitivity during romantic physical contact. Oxytocin is one of the reasons why teen girls are so focused on romantic fantasies.

For teenage boys, on the other hand, the testosterone coursing through their veins gives them a laser focus on sex. That doesn’t mean that teenage boys don’t have romantic fantasies or that they don’t fall in love. In fact, fatherhood can actually reduce testosterone levels because oxytocin promotes loving and protective behaviors. Consequently, it’s not uncommon for men’s libido to fall when their partner is pregnant.

One of the benefits of oxytocin is greater confidence

In addition, some interesting studies show the effects of oxytocin on self-confidence and generosity. The love hormone can even reduce social anxiety.

In a high-stakes game, study participants who received oxytocin nasal spray were twice as confident as participants in the control group.

Researchers believe that primitive females tended to be social with each other to defend themselves from male aggression.

The same thing happens in some species of monkeys. If a large male tries to bother a female, a group of shrieking female monkeys will scare him off. Some scientists believe that this might be why women get together so frequently and have such intimate and affectionate conversations. Dopamine is what actually stimulates this type of activity.

Dopamine plays a very important role in the brain for a variety of things. It’s associated with behavior and cognition, motivation and rewards, sleep, learning, humor, and attention. It’s commonly associated with the brain’s pleasure system. Dopamine reinforces positive associations with certain activities so that you’re more likely to seek them out.

Dopamine is also involved in naturally rewarding activities such as eating, sex, and some drugs.

The combination between oxytocin and dopamine supplies the pleasure of intimacy in a woman’s life, especially when estrogen is at its peak.

Some studies with lab animals showed that oxytocin inhibits the development of tolerance to various addictive drugs (for example, cocaine, opioids, and alcohol). It also reduces withdrawal symptoms. As if that weren’t enough, studies suggest it also provides emotional balance and calms anxiety, panic attacks, agoraphobia, phobias, and stress.

Researchers have observed that people with social anxiety can reduce it or make it completely disappear with high levels of oxytocin. It can also help patients with certain psychiatric disorders such as schizophrenia or autism.

In relationships, another hormone, vasopressin, complements oxytocin. It works to “defend the territory”, to set the boundaries of what intimately belongs to the two people in question.

Neuroendocrine studies have shown that the bond of a mature relationship lasts over several reproductive stages thanks to oxytocin and vasopressin. The levels of both of these hormones rise during copulation and childbirth.

Vasopressin is the hormone that helps keep the bond strong between partners. It activates aggressive defense mechanisms of the partner and family territory, which also prevents the female from copulating with other males (thus guaranteeing the parental investment).

You can think of love as an addictive drug with some significant side effects. A study from the Albert Einstein College of Medicine suggests that “withdrawal” from love (for example, after a breakup) can lead to serious depressive and obsessive behaviors similar to what happens with drug addicts.

Along those same lines, love can also cause emotional dependency. That’s because, when you’re in love, levels of chemical compounds and hormones such as dopamine, oxytocin, and serotonin are quite high. That’s why love makes you feel energetic and motivated. Haven’t you ever noticed that when you’re in love, you can get by on a few hours of sleep?

Some researchers argue that when this cascade of hormones subsides, people often interpret it as falling out of love. What really happens is that the neural receptors adapt to the excess chemical flow and you need a higher dose to keep feeling the same way.

Oxytocin also helps forge permanent bonds between lovers after that initial wave of emotion. It actually changes the connections of billions of neural circuits.

It’s important to remember that oxytocin is an endogenous substance, which means that it’s secreted by the brain and affects you as a drug would. It releases transmitters such as dopamine, noradrenaline, and serotonin. These neurotransmitters flood the brain with phenylethylamine, a chemical compound in the amphetamine family. Chocolate is rich in phenylethylamine, which is why it’s so appealing during a breakup!

Oxytocin also plays an important role in jealousy. When someone betrays you, you lose confidence, your oxytocin levels fall, and your cortisol levels rise.

At any rate, you can’t think of neurotransmitter and hormone secretion from a purely biological standpoint. Behavior, thoughts, beliefs, values, emotions, ideas, prejudices, life experiences, and fantasies can also affect the release of these chemicals in your body.

Neurotransmitters and hormones such as serotonin, endorphins, and oxytocin are a triad that helps decrease cortisol levels during stressful moments. That’s why sports, peaceful places, and emotional bonds (family and friends) are beneficial for combatting stress. As you can see from this article, the benefits of oxytocin are seemingly endless! In a nutshell, oxytocin brings well-being and happiness to your life.

Neurotransmitters: Types and Functioning
Neurotransmitters are very important chemicals in our nervous system, and the way they influence neurons is not always the same. Find out more with us! Read more »
Link copied!
Interesting Articles
Hormones
The Causes and Treatment of Hypermenorrhea

It's something half the population experiences for a good part of their lives. For some women, it isn't a problem,…

People have been studying the role of enkephalin in pain transmission for over three decades. Enkephalin is a hormone that acts as…

Women have a lot more sex drive problems after menopause, as menopause seems to lower libido. Levels of estrogen drop…