The Biological Explanation of Love

We like to think of love as a magical force, too powerful for us to fully understand. The truth is, however, that there is a biological explanation of love. 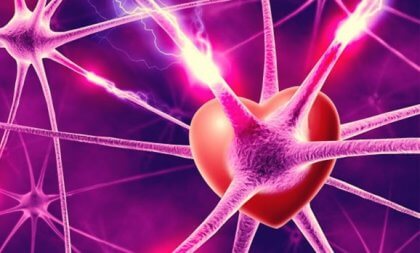 We like to think of love as this ethereal thing that’s controlled by forces beyond our understanding. It’s nice to think this way, it makes it seem magical. However, the truth is that there’s a biological explanation of love. Courtship, desire, and passion are simply cocktails of neurons, hormones, and love.

Talking about a biological explanation of love can be a bit of a buzzkill. For some people, this matter-of-fact explanation of love ruins the excitement. That being said, it also helps you better understand what happens when you fall in love. This makes it possible to experience love with greater awareness. Not only that, but it gives you the ability to have greater control over the situation (if that’s what you want).

Neurons, hormones, and love always go hand in hand. Emotions and feelings arise, grow, and die in your cells. Well, in your neurons to be more specific. Hormones and love express the same thing in two different planes. One is physiological and the other is mental. Both of these processes happen in the brain. Let’s take a closer look at the neuropsychology of love.

“When you were young you talked about ‘falling in love’ with such amusing gravity, as if it were an actual recordable event, when what was it really? Chemicals.”

Hormones and attachment: The biological explanation of love

Attachment is the first emotional bond that you form in your life. You experience it with your parents, grandparents, or siblings during infancy. You literally can’t live without these primary caregivers. In this sense, you have people who love you unconditionally. These people are willing to protect you and guide you in the journey of getting to know the world and yourself.

Attachment isn’t just present in the early years of life. Attachment, as it turns out, shows up in romantic love as well as friendship. Hormones and love combine to create the feeling of not being able to live without someone. It’s similar to what happens when you were little.

The hormones involved in attachment are oxytocin and vasopressin. The human body releases oxytocin during breastfeeding and also during orgasm. Oxytocin improves bonds due to the positive associations that it inspires or strengthens.

Vasopressin, on the other hand, is released after sex. It produces a sense of attachment to the other person. That’s why experts believe that the more sex a couple has, the stronger their bond will be. Hormones and love are the foundation of a lasting relationship.

There’s controversy about what factors come into play when it comes to choosing a romantic partner. Some believe that they’re unconscious, while others believe that choosing a partner is the result of a combination of hormones and love.

Those who believe that hormones and love are the deciding factors think the definitive element in selecting a partner lies in the genes. Each of us selects a partner with the best genes. This is obviously an instinctive choice, as you clearly don’t know the genetic makeup of someone when you decide you’re attracted to them.

Those who ascribe to this school of thought believe that you decide you’re attracted to someone within 3 or 4 minutes. It has nothing to do with sexy makeup, brand-name clothes, or fancy cars. The most influential part about this brief, biological courtship is the pheromones. They’re imperceptible and you’re not consciously aware of them. However, our atavistic perception mechanisms are more sensitive to them. They communicate sex and fertility, and they lead to attraction and love.

Other interesting facts from the biological explanation of love

There are different elements that play a role in romantic attraction. For example, certain studies demonstrate that people tend to choose romantic partners who have a similar lung capacity. The same thing happens with ear size, particularly the size of your earlobe. We can also add neck circumference and wrist size to the list.

Neuroscience also tells us that when you’re falling in love, your hormones go through a period of elation. Basically, the brain produces more “monoamines”. Specifically, your body produces more norepinephrine, dopamine, and serotonin. Each one of these hormones causes different reactions that provoke certain behaviors. Let’s see what they are:

As you can see, hormones and love always go hand in hand. That doesn’t mean, however, that the biological explanation of love is the end of the story. Emotions and your imagination can have an effect on your physiology as well. At the end of the day, that’s what we are as humans: biological material and psychosocial abstraction wrapped into one fascinating package.

Link copied!
Interesting Articles
Wellness
Sadness is Not the End of the World

How often have you felt like the sadness you feel is the end of the world? Remember those moments in which…

Eduardo Galeano was an exceptional man, and one who, without a doubt, did not leave anyone feeling indifferent. The Uruguayan writer, author…

Wellness
Siblings Are Friends We Didn't Have to Choose

Our siblings are best friends, and we didn't even have to choose them. They've made us want to disown them, they've annoyed us,…