How Is Integrated Psychological Therapy Used in Schizophrenia?

In this article, we'll put forward the case for integrated psychological therapy as an effective treatment for schizophrenia and as a complement to medication. 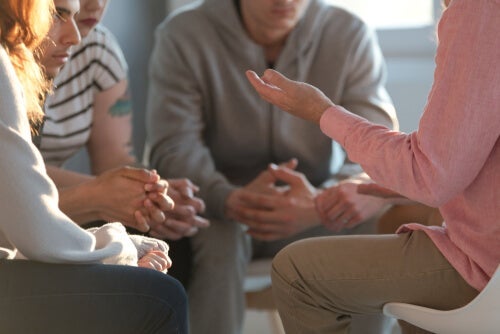 Currently, we have different types of psychological interventions for schizophrenia available to us. These interventions have taken an irregular course in recent years. However, something called Integrated Psychological Therapy has arrived, but what exactly is it?

In recent years, the aforementioned interventions have been dominated by the pessimistic and organized vision of psychiatry represented by Kraepelin’s psychoanalysis. He considered dementia to be a narcissistic neurosis in which transfer and analytical treatment were impossible.

A change in therapeutic care

As a result, there has been a change in therapeutic care. At first, we only focused on the treatment of schizophrenia itself, or the rehabilitation needed after the resulting deterioration. Now, however, there are therapies to treat the symptoms themselves. One of them is Roder and Brenner’s Integrated Psychological Therapy for Schizophrenia.

The main advances in the strategies for schizophrenia treatment have been developed and refined based on the vulnerability-stress model. This is a framework that shows how environmental stress factors interact with biological vulnerability.

We can start from the assumption that schizophrenics show deficiencies on different behavioral levels. These are intentional-perceptual, cognitive, microsocial, and macrosocial. The deficiencies on one level can negatively influence the others, and thus there’s a hierarchical relationship between them all. From this hypothesis, Brenner and his colleagues developed the penetration model.

This served as the basis for explaining schizophrenic symptoms and for developing integrated psychological therapy (IPT). From here, we would see that improvements at a cognitive level will have a direct effect on improving behavior.

This treatment works in a group format, with generally 5 to 7 patients, and experts developed it specifically for schizophrenia sufferers. The goal of the therapy is to improve the schizophrenic patients’ cognitive and social skills. The sessions last between 30 to 60 minutes, and take place three times a week over the course of three months.

The ideal type of patient for the treatment is:

Experts have applied this treatment to more than 700 patients in different socio-cultural contexts. As a result, we can confirm that it’s an effective program (from a psychological point of view) for treating schizophrenic symptoms.

Integrated Psychological Therapy for schizophrenia consists of five subprograms. These aim to improve cognitive disorders and the social and behavioral deficits that are so characteristic of the disease. The subprograms are arranged hierarchically:

Each subprogram is designed in such a way that, as the therapy progresses, more and more is demanded of the patient. Progress is made, starting from simple and predictable tasks, and then working up to difficult and complex ones.

At the same time, the structuring of the therapy decreases. At the start, there’s a more structured approach, but this becomes more and more spontaneous as time goes on. Each subprogram also begins with material that doesn’t require too much emotionally. Throughout the treatment, the counselors will gradually increase the emotional load.

Here are the different subprograms that integrated psychological therapy uses:

The initial subprogram of cognitive differentiation improves the elementary cognitive processes of patients, such as attention span or the sharing of ideas. At this point, however, performance will still be below the normal range.

The data available so far can’t confirm the effectiveness of the penetration hypothesis in Integrated Psychological Therapy for schizophrenia. The effects on cognitive variables don’t always produce consistent behavioral improvements.

The ability to process information properly is highly necessary, but this isn’t all that’s needed to create what we can call “normal” behavior.

It’s possible that changeable factors, such as self-image, may inhibit the penetration model. However, in other studies carried out by the authors, they have also found it can work in the opposite way.

If one begins with social rehabilitation, it’s possible to exert a more appreciable downward effect towards basic cognitive functions. This will then activate coping skills, develop non-deteriorated cognitive processes, and improve self-concept.

Currently, from within Integrated Psychological Therapy, there are new programs available, such as training in emotion management, which is aimed at reducing the influence of dysfunctional emotional states on cognitive and social functioning.

Experts have also developed a training program in leisure, living, and work skills. They have done this to facilitate the generalization of the skills learned in therapy. They’ll then be able to create coping-oriented treatments, based on psycho-educational programs, with the aim of correcting the way we can cope with schizophrenic patients.

The things we've learned in recent years about our brain is very valuable. For starters, we know that it's elastic…

Therapies
How You Can Teach Your Psychotherapist

Psychotherapy is an experiential and dialectical process. In this kind of therapy, your therapist influences you. However, you also influence…

If you're going through a period of crisis, there are different techniques that can improve your quality of life, whether you're…

Victims of a traumatic experience go through a lot of pain and suffering. The worse part is people's attitudes towards…