How Does the Social Brain Give Humans an Evolutionary Advantage?

The social brain is one of the main resources humans have to overcome the challenges of our environment. It allows you to live in the company of others and feel protected, among other things. 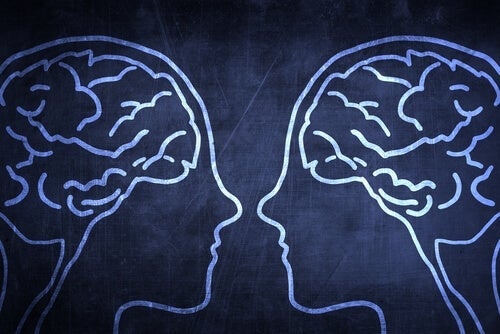 Neuroscientists use the concept of the social brain to refer to the innate human ability to relate to others. Studies show that some brain circuits play a role in the development of self-awareness and empathy.

Researchers argue that several areas of the brain directly relate to social relationships. For example, there’s the fusiform gyrus, which enables you to memorize faces. Mirror neurons make imitation possible and the von Economo neurons (VENs) help orient you during conflict situations.

Another crucial aspect of the social brain is the ability to create and use language. This has been a determining factor in human evolution and is directly associated with the need to socialize. The social brain consists of two systems: mirror neurons and theory of mind.

“Great discoveries and improvements invariably involve the cooperation of many minds. I may be given credit for having blazed the trail, but when I look at the subsequent developments I feel the credit is due to others rather than to myself.”

The social brain and mirror neurons

Mirror neurons are a special type of neurons that activate when you observe actions or emotional expressions in other people. In other words, when you watch someone doing something, it’s as if you were doing it yourself. One way or another, human beings take on the feelings and emotions of those around them.

Mirror neurons primarily reside in the frontal lobe, a region associated with movement and touch. Also, they’re found in the parietal lobe, which is responsible for your body image and the information you get from your senses. Last but not least, there are mirror neurons in the insular and cingulate cortex, both of which are related to emotions and pain.

Mirror neurons are responsible for what scientists call “social contagion”, which is one of the fundamental mechanisms of the social brain.

As the name suggests, social contagion is when individuals pass their feelings and emotions from one person to the next through an almost automatic mechanism. As a result of social contagion, you end up imitating what you perceive in your immediate environment.

Another important system that shapes the social brain is theory of mind. This is the ability to attribute intentions or thoughts to yourself and others. This function allows you to reflect on your own mental state and that of others through body language.

This perception of yourself and others includes being able to attribute emotions, feelings, and beliefs, among others. Also, it allows you to predict your behavior and the behavior of others in response to certain events. In general, this isn’t something you do deliberately. It’s intuitive behavior.

Mirror neurons and theory of mind are two of the main components of the social brain and its most complete product: empathy. Most people know that empathy is the ability to understand other people on their terms. In other words, putting yourself in someone else’s shoes.

Everyone is born with the potential to develop empathy, but not everyone achieves it. In “normal” conditions, all human beings would have the ability to put themselves in someone else’s shoes. However, individual experiences and upbringing (and the maladaptive behavior and prejudices that go along with it) can foster decidedly unempathetic behavior.

Cooperation is an intelligent act

Physically speaking, humans aren’t superior creatures. We’re much weaker and clumsier than many other living things. Not only that, but our senses are dull and slow compared to those of other species. The only way that humans managed to survive such a hostile environment is with brainpower. Our brains, in turn, have been able to develop as much as they have due to our social nature.

What was true for primitive humans continues to be true for us today, although our current individualistic and utilitarian attitudes might not reflect that. Everyday life and human history prove time and time again that cooperation is the best way to overcome problems and evolve as a species. Nature, in the form of the social brain, encourages us to do just that.

Sleepwalking is a sleep disorder that makes a person get up from bed at night and even talk while they're sleeping. In fact, the person may act normal, as if…