Happiness Has No Limits 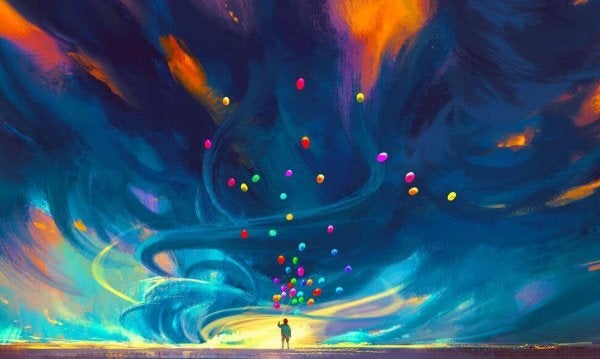 When my math students ask me what a limit is, I tell them that a limit is a movement. A movement that sometimes ends in a precipice and sometimes never ends. It can be a movement towards “having something”. Does this bring happiness?

Most parents tell their children they have to be the ant and they reject the grasshopper (check out the fable The Ant and The Grasshopper if you don’t catch our drift). The grasshopper was, of course, the guilty party at the end of the story. The future is unpredictable and you never know how many resources you may need if things go pear-shaped.

Children are initially unable to understand the complexity of this philosophy, and see knowledge as a way to pass exams, and in this way give their parents happiness.

This knowledge will take on a new meaning when they fall in love. At that time they’ll want to know everything. They’ll be fascinated with the possibility of discovering everything they can.  This is how love becomes the engine of knowledge. A movement that reinforces itself with the idealization that occurs inevitably at an early age.

“Thousands of candles can be lit from one candle, and the life of that candle will not be shortened. Happiness is never shortened by being shared.”

Happiness and the “need to have”

One of the most frequent motivations is the “need to have”. We live in a society that is constantly fleeing towards consumerism. It encourages us to maintain our quality of life, or even to increase it, by acquiring more and more.

From time to time each model is renewed and the past becomes obsolete. It stops being paraded along the street and ends up as a museum piece, being gazed upon by those walking by, the ones that show us the very existence of this constant movement.

Money takes advantage of this need and lures us. It seduces our dignity, our bodies or our selfless motives. This is how money acquires an attraction that few can resist, for which many have sold their souls to the devil.

Money becomes the carrot. It may well be that we go where the people go, but people go where money leads them. The fact that someone carries out a certain activity becomes a valid justification for others to follow them.

That’s what has driven many people in politics and sport to abuse their power and their bodies just to get ahead. It’s also what made a large part of Nazi Germany follow the whims of a murderer. If everyone else is going there, then surely that is the way to happiness. And, if that’s the case, then why shouldn’t we follow them?

Another “engine”, and at the same time a source of dissatisfaction as far as happiness goes, is pleasure. The desire to seek satisfaction makes us take down our guard. It makes us want the temporary things rather than the permanent. It makes us look for short-lived pleasures, rather than a true lasting happiness. In this way pleasure seduces our fragility – enjoy today because you may not have a tomorrow.

But who can fight against this incessant message? The newspapers are full of misfortunes and very few reasons for hope. Somehow we assume that we are tuned in to the frequency where the action is.

This is how we come to the point where we don’t care if we die, as long as we’re satisfying our desire for pleasure. But wow, that goes right against the message of the fable and  the attitude of the ant? The idea of accumulating, just in case. This is the way neuroticism appears, an anarchic behavior that ends up breaking the other person apart. In all their striving to keep going, the person has forgotten their reason for being…and plain common sense too. That’s what happens when you don’t know whether to choose responsibility or enjoyment.

We forget the common sense that gives us reasons to keep going when everything starts getting complicated. Reasons that have little or nothing to do with money and a lot to do with our true value and that of those around us. Let us remember the importance of this common sense, contemplating the famous work of Viktor Frankl , in which he described how common sense, regardless of whether it was true or false, caused many people to survive terrible conditions in concentration camps. Without it they would have surely given up.

Happiness as a virtue

A more appealing interpretation of happiness is one that has to do with virtue. It puts us firmly in the driving seat and makes us think about our objectives. It makes us think about virtues such as thanking, forgiving or loving. Activities that embrace  the past, the present and the future in our very being. Activities that will ensure a good outcome for our personal story, and the possibility of sharing in the present and giving us hope for the future.

On this path there is also a desire to know. For getting to know others, but also for getting to know ourselves too. A second knowledge that will never end, just like the first one mentioned above, but one that gives calmness and security. If we walk this way through life there will be questions, and a few answers too. Our shadow will become our happiness. The shadow which shows us the difference between the need to have and the need to be.

The search for happiness will indeed become an limit with no end. Happiness is movement and yet it has something of the infinite too, so let’s learn to walk through its ample chambers.

It’s So Simple to Be Happy and So Difficult to Be Simple
Sometimes, to be happy we have to leave everything behind and start again from zero. But other times, it may mean some real inner work. Read more »
Link copied!
Interesting Articles
Psychology
Mercedes Rodrigo: Spain's First Female Psychologist

Human beings have many great contradictions. One of them is their difficulty to honestly appreciate the virtues of others, without…

Psychology
I Reserve the Right to Face my Demons

I reserve the right to be sad, to feel bad because it’s not fair or because something isn’t going well.…