Biography of Viktor Frankl, the Father of Logotherapy 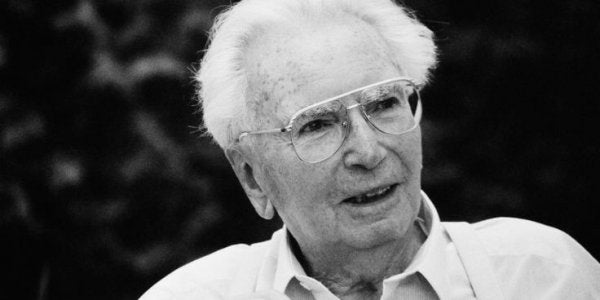 Many don’t know whether to call Viktor Frankl a hero, martyr, or great thinker. The truth is, he was some of each. He was a hero because he bravely faced some of the worst adversity a human being can live through. He was a martyr, because even though he could escape this adversity, he chose to stay and suffer with his people during an atrocious war. Finally, he was a great thinker because he left a new school of psychology as his legacy: logotherapy.

Viktor Frankl is one of those human beings that managed to grow as a person amidst some of the worst human misery and leave in one piece. He was an Austrian doctor and psychiatrist, born into a middle class family in 1905. He had two siblings, one older and one younger.

“When we are no longer able to change a situation – we are challenged to change ourselves.”

It is important to note that he grew up in a tranquil home and enjoyed a peaceful infancy. He describes it in his own words with a story from when he was 5. He awoke in bed, without opening his eyes, and felt an immense sense of happiness and peace. Upon opening his eyes, he saw his father sleeping by his side.

During his adolescence, his family had to survive the rigors of WWI. Goods were scarce and he learned what scarcity and hunger was. It was during this time that Frankl became an avid reader and established correspondence with Sigmund Freud. He became passionate about the enigmas of the human mind.

Viktor Frankl and the meaning of life

When Viktor Frankl was still just an undergraduate student, he gave his first conference. It was titled “The Meaning of Life”and was taught at the Popular University of Vienna. From a young age he was occupied with the questions he would try to answer throughout his life: Why do we exist? What is the meaning of life?

Although he was initially very interested in psychoanalysis, in 1925 he distanced himself from Freud. He believed its approaches were too deterministic. He turned his focus to the “individual psychology” of Alfred Adler. Afterwards, he became interested in the theses of Rudolf Allers and Oswald Schwarz, founder of psychosomatic medicine.

Frankl had always been passionate about philosophy, especially for existentialism. Nevertheless, he was inclined to study medicine, specializing in neurology and psychiatry. From 1933-1937, he was a psychiatrist in the psychological clinic at the University of Vienna. In 1939, he was named head of the Department of Neurology at Rothschild Hospital in Vienna. He excelled in his profession until his destiny took a radical turn.

Nazism and the Second World War

Viktor Frankl was Jewish and lived in Austria. Because of this, he felt the effects of the spread of Nazism from an early age. His situation became more and more precarious. When the Second World War began, his brother, Walter, was captured by the Nazis and sent to a concentration camp.

Later his sister, Stella, fled to Mexico. Viktor requested a Visa from the United States and it was granted. However, he anguished over the possible fate of his parents and patients.

It was then that he made an extreme decision. He explained it this way: “On the radio was a piece of marble. . . a Hebrew letter was engraved on the stone. My father told me that the letter appeared in only one of the Commandments, in the Fourth Commandment that says ‘Honor your father and your mother and you will be in the promised land.'” After this, he decided to remain in Austria and return his US Visa.

In 1941, Viktor Frankl married Tilly Grosser. Some months later, the Nazis made her abort the baby the two were expecting. In 1942, Viktor, his wife, and his parents were forced to the Theresienstadt camp. The following year, his father died of hunger, greatly diminished by respiratory illnesses. In 1944, Viktor was moved to Auschwitz with his wife. They were separated, and he heard nothing more from her until after the war.

This period of difficult confinement and forced labor sparked great reflections for Frankl. Finally, in 1945, Frankl was liberated by the United States Army. His wife, who had been moved to Bergen-Belsen, also gained her freedom. Tragically, she was trampled to death in the stampede that occurred when all the newly liberated prisoners ran to freedom. Viktor’s mother had died some years before in a gas chamber.

Viktor Frankl in search of meaning

When he left the concentration camp, Frankl searched for his family and was faced with the devastating truth that he was alone. He would never see his loved ones again. The first thing he tried to reconstruct was a book of his that was in a manuscript and that had been taken from him when entering the camps. He succeeded in remaking it and published it, his first book, under the title Psychoanalysis and Existentialism.

Soon, before the Christmas of 1945, Frankle felt an undeniable urge. He needed to talk about what he had lived through and what he had learned in the concentration camps. So, he hired three secretaries and had them take notes as he recounted all that had happened to him. For nine days, he only stopped speaking when he could no longer hold back tears.

Thus the greatest work by Viktor Frankl was born: Man’s Search for Meaning. This book has been translated into almost every language. Many consider it a masterpiece of testimony as well as psychology. The most moving thing about the book is that Frankl did not want to recount the cruelties. His goal was to send a moving message to the world. He said: “I wanted simply to convey to the reader, through a concrete example, that life has meaning and potential in all conditions, even in the most miserable.”

Logotherapy, a legacy for humanity

Viktor Frankl was able to remake his life. He remarried in 1947, had a daughter, two grandchildren, and a great grandchild. His marriage lasted 50 happy years. He received more than 40 honorary doctorates, published more than 30 books, and taught at some of the most prestigious universities in the world. These include Harvard, Stanford, and Vienna. He died in 1997, just after having made his first flight as an amateur pilot.

Frankl’s school of psychology is called Logotherapy and many psychiatrists use his methods today. His theories state that human beings have 3 dimensions: the somatic or physical, the mental, and the spiritual. From his perspective, psychological problems stem from a lack of strength in the spiritual dimension and/or in the defining of the meaning of life.For the logotherapists, “the will to meaning” is what allows us to continue living.

How do we find meaning? According to Frankl and his followers, there are 3 paths we can take: creation, transcendental affective experience, and attitude towards suffering. The first corresponds with the values of creation and creativity. It has to do with the ability to create art, write, etc. The second is based on the value of experience, interpersonal interactions, and experiencing sensations. The third refers to the importance of attitude and supposes the capacity to overcome suffering.

The message Viktor Frankl would like to pass on to others is that mental disorders originate not in suffering, but in the meaning given to that suffering. His life was, without a doubt, and example of the human ability to rise above any circumstance.

10 Lessons From Viktor Frankl About Facing Adversity
These are some of the lessons Viktor Frankl taught us Read more »
Link copied!
Interesting Articles
Psychology
5 Habits That Lead To Success

I want to succeed, but how do I do it? Everyone is "programmed" in some way to want to achieve success in every area of life. However, even if we know…

Psychology
Why are Statistics Useful in Psychology?

Statistics usually draw the attention of those who start a psychology career. They believe that numbers are a thing of…

Psychology
When I Let Myself Feel, I Find My Strength

Psychology
Is it Possible to Change Attachment Patterns we Learned as Children?