Hans Rosling: The Prophet of Demographics

According to Hans Rosling, we'll see major changes in the world's population in the following years. Read on to learn more! 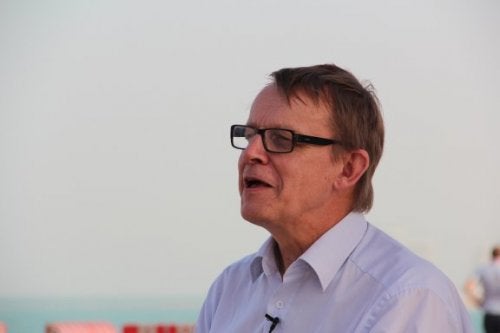 Hans Rosling’s predictions started to be highly valued when Gapminder Foundation, which he founded, developed an incredibly interesting piece of software. Its main attribute was converting statistics into interactive graphs. From these graphs, Hans Rosling was able to visualize important world demographic trends.

This Swedish academic and public health professor joked about everyone wanting to look into his computer because that’s where economic growth could be seen. And he was right. Hans Rosling’s demographic predictions can also infer the economy’s fate.

Google bought Gapminder Foundation’s software, Trendalyzer, in 2007. Thanks to this, the multinational technologic company published the famous Motion Chart, which allows people to see the main demographic and economic trends.

But what did Hans Rosling predict about the near future? Discover it below!

Although this researcher was a very rigorous academic, he also had a good sense of humor. Thus, some of his predictions are characterized by his humorous touch. This prediction, for example, states that the world’s economy doesn’t depend on what happens at Wall Street, nor what happens in the International Monetary Fund, but in people’s bedrooms instead.

Basically, this means that the future of the economy depends on the number of children each couple has. He even stated that when quality of life increases, the birth rate decreases. Thus, each country is in the hands of what people do in their bedrooms.

Africa: One of Hans Rosling’s predictions

According to Hans Rosling, Africa will grow economically between 2015 and 2050. That’s why he refers to it as the ’emerging China’.

He even assured that the fastest growing economy will be Africa’s. Rosling said that whoever wants to become a millionaire should invest in Africa, where educated women already represent 20% of the population in countries such as Tanzania, Ethiopia, and Ghana. This fact will lead to a demographic change and promote overall growth.

According to Hans Rosling, the age of retirement will increase

The world is becoming old and the elderly population is significantly increasing. In some countries, adults over the age of 65 now represent a good portion of the population. And to many nations, having a lot of non-working people is very expensive.

Rosling pointed out that, in the near future, the age of retirement will be 75 years old. Few countries will be able to afford to have a big group of people “playing golf” over a 10-year period. Plus, scientific advances have made age-related diseases manifest a lot later in life.

According to Hans Rosling’s data, a paradoxical situation is taking place in many Asian countries. On the one hand, women have reached important positions in both academics and the work world. However, society is still characterized by sexist traditions.

This has led many Asian women, especially in Singapore and Taiwan, to discard marriage as a life choice. They know that if they get married, they’ll be limited by their husbands or even their father-in-laws. That’s why the birth rate is decreasing incredibly fast, while the presence of Asian women in the job market is increasing steadily.

Controlling immigration is fundamental to the world

To Hans Rosling, migration is a phenomenon that creates chaos in the world. For that reason, it’s a reality that will become more and more restrictive. This applies especially to immigrants who go to rich countries looking for better opportunities.

Rosling says that this destroys families and encourages illegal business. Thus, more exhaustive controls should be put in place to solve this issue. To Hans Rosling, these controls will benefit migrants, their families, and their countries.

All of Hans Rosling’s predictions are based on a thorough analysis of available data. Demographic previsions have proven to be highly precise. That’s why it won’t be surprising if his predictions come true in the next years.

The Drama of Refugees – in No Man’s Land
The drama of refugees speaks to the pain of thousands of people. People who dream, who crave the same thing as you. Who are suffering. Read more »
Link copied!
Interesting Articles
Culture
Steve Jobs' 5 "Never" Quotes

Culture
3 Mental Training Exercises That Will Make You Happier

Is it possible to be happier just by doing mental training exercises? The answer is yes! The last two decades of…

How much time do you dedicate exclusively to yourself? Most people would answer that they don't dedicate any time to…

Culture
The Reflection of Our Lives on Social Media

When we see all of our contacts' status updates and photos on social media, we may feel like our life…