Grieving a Pet: the Loss of a Dear Animal Friend 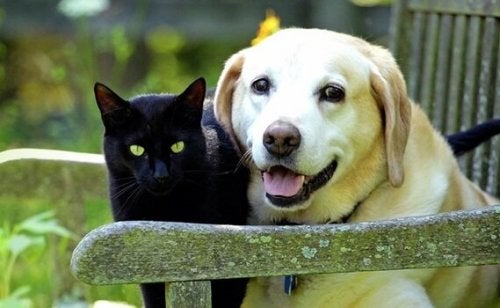 No one teaches you how to deal with grieving a pet. Nor do they teach you how to say goodbye to someone who was like a member of the family. A dog isn’t just a dog. You can’t just replace your cat with a new one. Each animal holds a special spot in your life, a little corner full of memories, sweet routines, and looks that you will never forget.

Only a few months ago, we were surprised to read an article on this very subject. Variety magazine published an article about Barbara Streisand cloning her dog. Streisand felt that she was incapable of dealing with the loss of her pet Samantha, so she decided to have her cloned the previous year. Before the dog died, she had a clinic extract cells. A few months later, she had two clones of her Coton de Tulear.

“Until one has loved an animal a part of one’s soul remains unawakened.”

Today, the singer says she’s waiting for the puppies to grow up to see if they have the same calm, intelligent disposition as Samantha. Everyone, of course, is entitled to do whatever they’d like with their money. Nevertheless, we have to ask ourselves, is the best way to get over the loss?

No one, animal or person, should come into this world just to be the copy of someone who is no longer here. Every human being is unique and incomparable. Attempting to repeat the same life narrative doesn’t make any sense. Not only that, but it raises some complex medical and ethical dilemmas.

That said, what we’re trying to say is that grieving a pet can actually be done in a healthy, helpful way. It will take strategies to accept the loss, little by little, with courage and responsibility.

Grieving a pet in a culture so insensitive to animals

The loss of a pet is often paradoxical. If you lose a family member, you can ask for a few days off work. If you lose a pet, you don’t necessarily have the same rights. For many people, the loss is still quite traumatic. In fact, the trauma is often heightened because of other people’s insensitivity. You hear things like, “but it was just a dog,” or “you’ll feel better if you just get another one.”

There’s another issue with pets that comes up frequently but no one talks about much. It’s the question of who keeps the pets in cases of divorce or separation. It’s such a serious issue that courts often make the decision. In this case, the one who ends up without custody ends up grieving a pet as well.

Interestingly, “pet grief counselors” are becoming more common in the Western world. There are psychologists who specialize in the human-animal bond and the transitions that happen in those relationships.  The help they offer focuses on facilitating the grieving process following these steps:

Something many pet owners experience when their pet dies is a feeling of guilt. They have the idea in their mind that they could have done more for them. Another element that affects grief is the issue of euthanasia. The goal of euthanasia is to free an animal from suffering, but it can bring on complex emotions in the ones making the decision.

So, it is extremely important to banish any shadow of guilt from your mind. Be with your pet in his final moments, knowing you can’t do any more for him. Let him go with love and affection.

Step two: respect that everyone deals with loss differently

Each member of the household will deal with grieving a pet in their own way. Understanding that and being supportive is extremely important. Likewise, it’s important to pay attention to how children and the elderly process the loss.

It might be the first time that children have had to deal with loss. Clear up any questions they might have. Be genuine and honest. Because, at the end of the day, the fact that they are small doesn’t mean their grief is less intense. Losing a pet tends to be more traumatic for the elderly. Pets play a significant role in their day-to-day lives, and so the absence of a pet can be much more difficult to take in.

Animals occupy space in our homes, but also in our routines. They greet us enthusiastically when we get home and keep us company on the couch or in bed. They are a lively presence, begging for food or for a walk at a certain time of day… Grieving a pet means facing the absence of these little interactions every day.

Being aware of the change is one way to make it easier to deal with. Another strategy is to create or change other habits to deal with your grief.

Step four: you can’t just replace your old pets with new ones

Let’s return to the case of Barbara Streisand. It doesn’t make sense to substitute one pet for another. Expecting this new pet to have the same character, behavior, and personality as the other is unrealistic.

Each animal is unique and it’s important to give yourself time to grieve. You must accept the death of your pet and keep your memories in a special place in your heart. Later, if you feel like it, you can open the door to another animal. In short, getting another pet right away isn’t the best way to grieve the one that is no longer with you.

In conclusion, the loss of an animal can be difficult to deal with and involves intense emotions. Some people feel alone and misunderstood in their suffering. After all, they’re not saying goodbye to just any pet. These animals were a big part of their lives. So, if you need help with grieving a pet, don’t hesitate to ask for help. That way you can remember all the good times, and move on.

Cat Therapy: 5 Benefits of Living with Cats
People have always said that a dog is a man's best friend, but what about cats? Read on to find out some surprising things cat therapy can do. Read more »
Link copied!
Interesting Articles
Human Relationships
5 Giorgio Nardone Quotes About Relationships

Emotional education is a response to social needs that aren't sufficiently addressed in ordinary academic plans. There's a presence of…

Self-esteem
When You Love Too Deeply, it's Codependency

Some people are willing to do anything, including tolerating any level of humiliation, in the name of love. This stems…