Kobe Bryant wore the gold and purple Los Angeles Lakers uniform like no other. He made people dream and taught many to love basketball and to understand why "the black mamba" became an NBA legend in the NBA. He died on January 26, 2020. 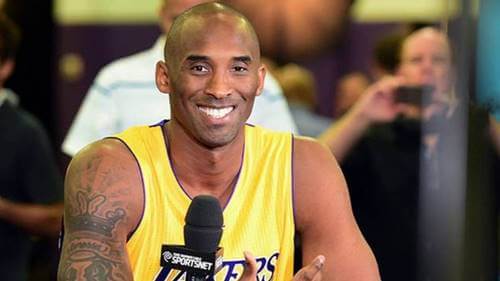 There are real-life giants outside fairytales. Some of them inhabit the world of basketball courts. Kobe Bryant was more than one of the most prominent stars in the NBA. He was and will always be one of those people that invite children and adults to dream. He was the giant who drew millions of viewers yearning to watch him play basketball.

As you can imagine, many people were truly shocked after the news of his death. Kobe Bryant, 41, his daughter Gianna, 13, and seven others lost their lives after the helicopter they were traveling in crashed into a residential area in Los Angeles, California. It was a fatal accident that highly impacted the world of sports where the Black Mamba stood out as one of the most beloved basketball icons.

Thus, many of his fans, athletes, politicians, celebrities, and anonymous people who admired him are paying tribute to him in one way or another. Every person does it in their own special way. And many gathered spontaneously at their local basketball court to commemorate a man who never stopped being a boy who was passionate about basketball. All he ever wanted was a ball and a basket in which to score each one of his dreams.

Kobe Bryant or Black Mamba – a man with a winning mentality

People referred to him as Black Mamba because he was quite dangerous on the basketball court. Some say that he chose it after watching Kill Bill, a Tarantino movie. That it was his determination that defined much of his professional life. “If you see me in a fight with a bear, pray for the bear”, he used to say. And such was his need to outdo himself, to always give his best, that he was motivated to train a lot more than other players.

His record attests to the effects of this mentality and his characteristic exceptionality: five NBA Championship Rings, one League MVP, two Olympic gold medals, a record of 18 consecutive All-Star Game selections, and four MVP Awards. He even won an Academy Award for a short animation he did about his life.

This giant who wore the gold and purple of the LA Lakers was an almost hypnotic figure on the basketball court. He had a fantastic scoring ability and an easygoing personality that made him rather likable, especially by the rest of his teammates. He cheered them on from the bench and even personally delivered water to them.

The boy who loved basketball

Some say that basketball was an innate talent for Kobe Bryant. It seemed his passion for it was a genetic trait transmitted by his father, Joe Jellybean Bryant, who was also a professional player. His daughter Gianna, who was already making a name in that sports world before she died as well, seemed to be a carrier of the gene.

Kobe spent a good part of his childhood in Italy, where his father played. But it wasn’t until 1991, and back in the United States, when he began to stand out as a young star in the world of basketball. It all happened while he studied in Philadelphia.

His skills, maturity, and exceptional game were such that he didn’t need to go through college as a large part of the most prominent figures in the world of basketball must do. In fact, he was already playing in the NBA at the age of 18. Also, when he was 21, he appeared in Forbes magazine after millionaire sponsorship agreements with Adidas, Sprite, Mattel, Spalding, and Giorgio Armani, among others.

Kobe Bryant, 20 years of career with lights and shadows

Kobe Bryant said goodbye to his professional career and to the Los Angeles Lakers in 2016. Actually, he did it after 20 years of career with an epic game. Once, they played against Utah Jazz and scored 60 points in one night. So, of course, the audience went insane and chanted his name over and over. This is because they were saying goodbye to Black Mamba, the giant who so incited them to dream.

He had a very successful career, even in spite of the controversial rape episode with a 19-year-old woman who worked at a hotel he stayed at. However, the city dropped the charges after an out-of-court settlement and a public apology from the player.

The lives truncated by his tragic death didn’t only leave wounds and gaps, but they also destroyed some personal dreams and projects. This is because Kobe Bryant was a fan of women’s basketball. Thus, he wanted it to be as recognized as men’s basketball.

In fact, his efforts focused on his second daughter, Gianna Maria-Onore. This is because she was already making a dent in the world of basketball under her father’s guidance. In fact, it was common to see them both in the stadium bleachers when he played for the Lakers. This is because they shared the complicity, affection, and the same overflowing passion for basketball.

One fateful Sunday, they headed to a game where Gianna was to play that very same afternoon. Unfortunately, neither arrived. They lost their lives, leaving an unfulfilled dream and a life project behind.

The entire world of sports deeply mourns their loss. However, the legacy of Black Mamba will endure forever. He’ll always be one of the most dazzling stars in the world of basketball.

Team Sports and Personal Development: How Are They Related?
Read this article to learn the many benefits of participating in team sports for all ages. They help develop many personal aspects. Read more »
Link copied!
Interesting Articles
Art and Psychology
Francisco de Goya: Biography of a Spanish Painter