God's Crooked Lines should be a required read for every psychologist, psychiatrist, and doctor. Author Torcuato Luca de Tena delved deep into the deepest, darkest, and most human corners of mental illness. 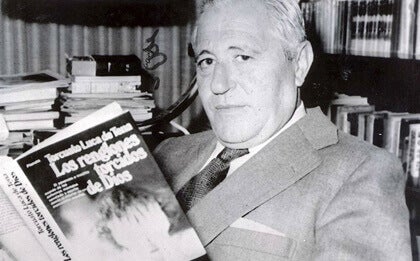 Journalist, writer, director of the newspaper ABC, academic at the Royal Spanish Academy… Torcuato Luca de Tena was one of the most prominent members of the Spanish social and intellectual elite in the 20th century. He made a name for himself in the literary world in the 60s when he won the Premio Planeta de Novela (Planet Novel Award) for his novel La Mujer del Otro (Another Man’s Woman). His most distinguished novel, however, would come a few years later. God’s Crooked Lines masterfully explores psychological themes and should be a mandatory read for every psychologist, psychiatrist, and doctor.

Some people say that talking about the Marquess Luca de Tena is to talk about a very concrete time in Spanish history. As a war correspondent and heir to a magazine and newspaper, his life was the reflection of a period in history that was complex and full of changes. That being said, more than his conservative ideas, political beliefs, or relationships, the most interesting thing about him was a very specific moment in his life.

It happened in 1973 when, after shareholders ejected him from his newspaper, he decided to leave everything behind and go to Mexico. He left his country and all of the social and political connections he had in Spain to try and pursue a long-held dream: to fully immerse himself in writing literature.

Thus, between 1973 and 1999, Torcuato Luca de Tena wrote ten novels, three comedies, and a book of poems. However, one of his most important projects would be getting to know first hand the worlds that were contained in the inside of psychiatric hospitals.

After his experience, he used what he learned to write one of the most singular books in the world of psychology: God’s Crooked Lines.

Luca de Tena’s father was a diplomat, so the family lived in Chile for several years. It was there that young Luca de Tena studied law, though he never ended up practicing as a lawyer. When he was 14 years old, he started his own school newspaper. By the age of 18, he had already published a book of poems. His passion was literature, not law, which is partly the thing that drove him to return to Spain and start his career in journalism.

With the arrival of World War II, Luca de Tena worked as a press correspondent in London. When the war was over, he covered different events in Washington, the Middle East, and Mexico. Later he became director of ABC as was expected, while he was making his first forays into politics.

Starting in 1973, Torcuato Luca de Tena became an active member of the Royal Spanish Academy. Thanks to his literary success, he started to make a name for himself as a prominent man of letters. He also made some successful attempts at children’s and young adult fiction with books such as La Brújula Loca (The Crazy Compass), Pepa Niebla, and El Fabricante de Sueños (The Dream Maker).

As we mentioned above, he won the Premio Planeta in 1961 for his book La Mujer del Otro (Another Woman’s Man), as well as other awards such as the Fastenrath Award from the Royal Spanish Academy in 1970 and the Cervatine Society award for best novel. Torcuato Luca de Tena died in Madrid on June 1st, 1999. He was 75 years old.

With his novel, Torcuato Luca de Tena gave the field of psychology an almost indispensable gift. We should mention that this isn’t an easy read. Nevertheless, the literary quality, along with the faithful and accurate portrayal of the world of the psychiatric hospital, makes this a must-read for all those who love this genre.

It’s also important to point out that famous psychiatrist Juan Antonio Vallejo-Nágera wrote the prologue of the book. Luca de Tena dedicated it to the doctors, nurses, guards, attendants, and other professionals who took care of the mentally ill.

God’s Crooked Lines tells the story of a young woman named Alice Gould. She’s a detective, and she doesn’t have any kind of psychological disorder. She ends up in the psychiatric hospital on purpose. The goal? To investigate a murder, the author of which is among the residents of the hospital.

Little by little, the protagonist gets to know the people who make up the complex human “fauna” who live in the hospital. She investigates their medical conditions, their disorders, and the complex and dark anatomy that often exists in these institutions. As the book unfolds, the reader starts to question whether Alice is telling the truth. Is she a detective? Or just another resident of the hospital?

The crooked lines of human nature

Torcuato Luca de Tena lived in a psychiatric hospital in Mexico for 18 days. He wanted the first-hand experience for his story. It was Our Lady of Fuentecilla Hospital, where more than 800 residents lived. “Crooked lines,” refers, of course, to the mentally ill. Society often sees them as God’s mistakes. Most people don’t try to delve any deeper than that.

The incredible thing about this book isn’t just the story and the writing. It’s why Luca de Tena wrote it. He wanted to tell this story to give people with mental illness their dignity back. His book was an attempt to show the world that people with psychological disorders aren’t mistakes. They’re complex and important members of society. Luca de Tena believed that they deserved more attention, better treatment, and respect. He believed that society owed it to them to take another look, to consider them dignified people.

God’s Crooked Lines is a book inspired by the anti-psychiatric approach. Thanks to Alice Gould, the reader gets to know the patients as the complex people they are. People who are often denied their humanity by the very institutions who claim to help them. Instead, they lock them up, strip them of their dignity, and overmedicate them.

A beautiful portrayal of mental illness

Torcuato Luca de Tena writes in a polished way. His books, however, don’t lack a sense of humor. That combination allows him to perfectly profile every character. He shows the delicate dance between insanity and lucidity, fragility and grandeur, human and tragic.

In the book, we meet such wonderful characters as “The Cyclops Woman” and the twins, Romulus and Remos. We also meet “Charito” Lopez and Ignacio Urquieta. They each have a psychological profile, a mental illness. We should note that this novel reflects the time when Luca de Tena wrote it. This was the late 80s when people still used now-obsolete (and pejorative) terms such as “oligophrenia”.

In conclusion, it doesn’t matter that it’s been forty years since Luca de Tena wrote his book. This intense and original novel crosses the line that many imagine between “normal” society and the world of psychological disorders. It’s always a good time to come back to good books. Especially those that have such an important message.

Isabel Allende: The Life of an Extraordinary Writer
Isabel Allende is a Chilean writer whose work has been translated into 35 languages. She’s considered the most read living Spanish-speaking writer. Read more »
Link copied!
Interesting Articles
Biographies
Valentine's Day: Who Was the Real St. Valentine?