Gerstmann's Syndrome: When You Can't Recognize Your Fingers

Imagine for a moment that you aren't able to recognize your fingers or perform tasks that require delicate movements. How can this be possible when you don't have any physical damage in your fingers? Gerstmann's syndrome explains it all. 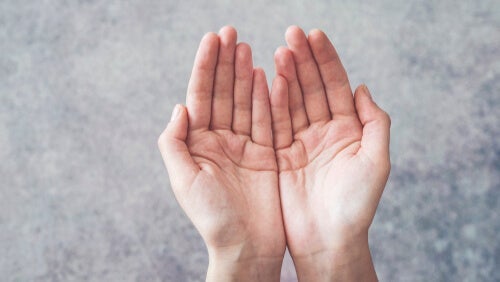 Gerstmann’s syndrome is a rare neurological disease. It’s best-known for its most prominent characteristic: the patient’s inability to recognize their own fingers. However, beyond this symptom, it’s a much more complex and acquired disease. This means that the symptoms appear after sustaining some form of injury or illness.

The condition was named after Josef Gerstmann, a young assistant at the Department of Neurology at the University of Vienna, Austria. This student described a series of symptoms in a woman who had suffered a stroke. From that moment on, the condition, composed of agraphia, digital agnosia, and acalculia, bore his name.

The causes of Gerstmann’s syndrome

First of all, we should note that most reported cases arose from a vascular problem. This seems to be the main cause of this syndrome, which is characterized by the inability to operate or recognize the fingers. Here are the most common symptoms of this condition:

In 1930, Gerstmann finally finished describing the syndrome after studying his patients’ injuries. He found that most had damage in the dominant parietal lobe, more specifically the angular gyrus.

This area, which is especially affected in Gerstmann’s syndrome, occupies the lower part of the parietal lobe. It’s related to language interpretation, which is the assignment of a common code for visual and auditory information.

Usually, patients with this syndrome have vascular injuries in the left middle cerebral artery, which irrigates the angular gyrus.

Thus, we should clarify that Gerstmann’s syndrome often occurs in an incomplete fashion. This means that the three main symptoms don’t have to be present in order to make a diagnosis.

On many occasions, there’s no sign of agraphia. Instead, semantic aphasia is very common. This is a defect in the understanding of logico-grammatical structures.

Since the syndrome was described many years ago, scientific advances have debated many of its components. Scientists are currently discussing the organic foundation of the syndrome. They’re proposing other areas of the parietal lobe in the etiology of the syndrome.

Most patients show lesions in the left parietal lobe, the dominant hemisphere in most of the right-handed population. Therefore, abnormalities occur at a cortical level in areas of complex processing.

The main disciplines that deal with the diagnosis of this syndrome are neurology and neuropsychology. Suspicions of this syndrome often become evident when affected patients have to do tasks that involve finger recognition.

From a neurological level, the diagnosis begins with exploratory tests. Then, doctors will confirm it using tomography or magnetic resonance imaging that allows them to see any damaged tissue. Likewise, neuropsychology is responsible for evaluating and then assessing impaired cognitive abilities through clinical observation.

There are different treatments, according to each individual specialist. In short, a combined neurological and psychological approach is always necessary.

Finally, doctors and experts must focus both treatments on the patient’s functional recovery. Therefore, their goals must seek optimal functioning and discourage isolation.

In principle, although Gerstmann’s syndrome is rare among the general population, it has attracted the attention of researchers and specialists due to its characteristics.

The interest lies in the fact that correct brain functioning also depends on the correct functioning of the vascular system. Therefore, all the activities that imply a risk factor for the circulatory system will also be a danger for the nervous system.

The Extended Mind: Connecting Beyond Brain and Body
The theory of the extended mind states that our minds aren't limited to the dimensions of our skull. Our environment is a part of it as well. Read more »
Link copied!
Interesting Articles
Brain
The Brain Processing of Future Episodic Thinking