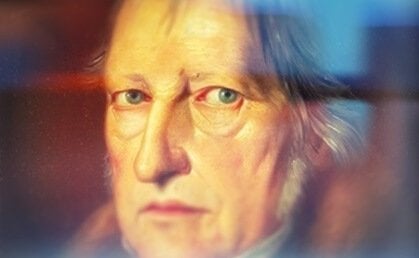 Georg Wilhelm Friedrich Hegel set a before and after in philosophical thought in Western Europe and 19th-century Russia. He was a loyal admirer of Plato, Descartes, and Kant. Hegel helped develop German idealism. In fact, he gave rise to a breakthrough in the theory of the evolution of consciousness.

Most people know that reading Hegel isn’t easy at all. His most famous book, The Phenomenology of Spirit (1807), is a sample of his dense but determinant intellectual legacy, which we know as the dialectic.

We must note that many people believed his theses were radical and inspired German nationalism. Adolf Hitler, for example, advocated for Hegelian philosophy because he found justification in phrases such as “only the Germanic world, as an embodiment of true Christianity, represents true freedom”.

“Education is the art of making man ethical.”

However, Hegel was much more than that. His thoughts were a wick that sparked thousands of theoretical and philosophical reactions. He inspired Marxist materialism and laid the foundations of Søren Kierkegaard’s pre-existentialism, Friedrich Nietzsche‘s metaphysical concepts, and even Theodor W. Adorno’s negative dialectics.

Essentially, Hegel’s philosophy invited us to think that not many barriers exist between oneself and the world. He wanted to express that we were the creators of our own truth. In addition, he introduced the concept of dialectics to explain how history and our own thoughts resulted from the continuous movement between solutions and contradictions.

Georg Wilhelm Friedrich Hegel was born in Stuttgart on August 27th, 1770 into a protestant family. He was friends with important people such as philosopher Friedrich von Schelling and poet Friedrich Hölderlin. Moreover, he was an avid admirer of Immanuel Kant.

He studied philosophy and theology at the University of Tübingen. After his father’s death, he received an inheritance that allowed him to dedicate himself fully to the academic world, shortly after presenting his thesis “Philosophical Dissertation on the Orbits of the Planets” in 1801. Not long after that, he became a professor, which allowed him to expand his knowledge on subjects such as mathematics, logic, and law.

“Only through the realization of great goals a person reveals his strong character.”

In 1807, he published The Phenomenology of Spirit, where he delved into aspects such as the sense of consciousness, perception, and knowledge. In this work, he emphasized the only thing that was real for him: reason. Soon after he published this book, many universities asked him to teach students in Heidelberg and Berlin.

His classes became famous across Europe. His students always said that he was capable of explaining almost anything. They also said that he could be compared to Plato himself.

His analyses regarding the philosophy of law and the state system encouraged multiple people to learn about his different approaches and theories. The cultural elite and politicians of the time considered him a person they could learn from and be inspired by in some way.

Above all, Hegel was known for introducing history into philosophy. Until that moment, the philosophical discourses started from a void, from an entelechy that desired to reach a sense of truth without considering important events.

In fact, events such as the French Revolution and the change of mentality of the time were some of the things that inspired Hegel the most.

Now, let’s take a look at the most relevant concepts of his philosophical legacy.

It’s quite common to define Hegel as the essence of German idealism. What does that really mean? Idealism is a philosophical theory that defends the following:

Likewise, he believed that happiness shouldn’t be the main goal in life. For him, the most important things were knowledge and reason.

Hegel defined reason as a dialectical process. One can affirm a fact and then deny it later on to overcome that contradiction. Thus, he believed the dialectical movement included the following steps:

Hegel believed that authentic freedom must start from a very specific framework: the State itself. The State should allow an individual to feel complete. In turn, this will allow them to acquire an authentic sense of dignity. Therefore, human beings need a legal framework to “submit to”.

Within this Hegelian scheme, individuals are able to achieve said authentic freedom through Christianity.

“To be free is nothing, to become free is everything.”

Hegel’s most famous thesis is the contradiction. According to this principle, a thing is and isn’t at the same time.

What this means is that we all change. We all transform and go from one state to another reality as a result of our own vitality. In short, life is a constant contradiction in and of itself.

Hegel made an interesting distinction between natural beauty and artistic beauty. The former refers to an exquisite kind of beauty due to its authenticity and freedom. It basically represents the natural spirit of things. The latter forms our spirit and allows us to do aesthetic research to acquire knowledge.

Georg Wilhelm Friedrich Hegel is one of the most remarkable philosophers of all time. Although many people admire him, others find his work quite uncomfortable. Perhaps some people disagree with his thoughts because of his concept of the German state/idealism or Eurocentrism. Lastly, there are people who are quite reticent to explore his work due to how complicated it is.

Nonetheless, his ideas marked a key moment in Europe. To this day, many consider his book The Phenomenology of Spirit a must-read.

“Nothing great in the world has been accomplished without passion.”

Hegel’s Master-Slave Dialectic
Master-Slave dialectic is Georg Hegel's theroretical construction. It's considered one of the key elements of his philosophy. Read on! Read more »
Link copied!
Interesting Articles
Psychology
The 4 Most Important Moments of the Day

In our daily lives, it is rather common for us to feel stressed out or have anxiety. We carry out…

Psychology
Cattell's Intelligence Model and What It Can Teach Us

Psychology
The Art of Listening

Yes, listening is an art. After all, not everyone knows how to do it. Plus, staying silent until the other person stops talking is not the same as listening. Thinking about…