Gender schema theory proposes that, in society, individuals are forced to identify with one gender or another. This can lead to the creation of stereotypes and expected behavior patterns that may be wrong. 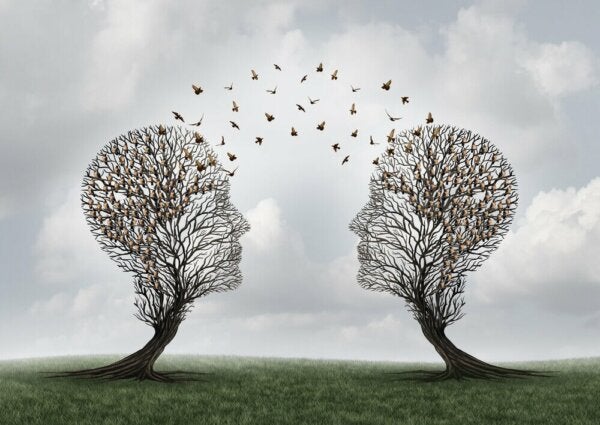 The gender schema theory was presented by psychologist Sandra Bem in 1981. It’s a cognitive theory that seeks to explain how individuals adopt a gender in society. It also studies how the characteristics socially associated with each sex are maintained and transmitted to other members of the same culture.

Bem stated that children learn about male and female roles from the society they live in. According to this theory, children adjust their behavior to align themselves with the gender norms of their culture. They do so right from the earliest stages of their psychosocial development.

The author suggested that Freudian theories focused too much on the influence of anatomy on gender development. Thus, he proposed a new theory. For Bem, a child’s cognitive development, combined with social influences, can influence thought patterns (schemas) that correspond to accepted male and female traits.

The gender schema theory tries to explain how we adopt a gender in society.

Gender patterns don’t only have an impact on how people process information. They also influence attitudes and beliefs that drive behaviors that are “gender appropriate”.

Gender patterns due to culture

Gender patterns also dictate a person’s value and potential in that culture. For example, a girl raised in a traditional culture might believe that the only path available to her as a woman is to get married and raise children.

Conversely, a girl raised in a more progressive culture might, according to her accepted patterns, do things very differently. She may pursue a college career, deliberately not have children, or decide not to get married.

Many of these influences are overt, while others are more subtle. In this sense, we should note that even the placement of gender titles in the vocabulary systematically places women in a secondary position. We can see this in the way the male name usually goes before the female.

All of these influences in society, however imperceptible they may seem, influence the construction of each individual’s gender schema. Moreover, both men and women are acutely aware of the consequences of not adhering to the cultural gender norms.

Therefore, when they find themselves in a situation of social disapproval for not exhibiting the expected characteristics according to their gender, they may feel pressured to change their behavior. They fear that, if they don’t, they’ll face rejection from those who don’t approve of them.

Gender stereotypes according to the gender schema theory

Since the gender schema theory is a theory of process and not of content, it can also help explain other types of processes. For example, those through which gender stereotypes become strongly entrenched in society.

Specifically, having strong gender schemas provides a filter through which you can process all incoming stimuli in the environment. This allows the person to more easily assimilate stereotyped information. As a result this further solidifies the existence of gender stereotypes.

In this sense, and in relation to adolescent development, Bem hypothesizes that, even though children can choose between a large number of factors related to sex, gender patterns will still lead to the person adopting behavioral patterns that conform to the cultural definition of what it means to be a man or a woman, almost without having a choice in the matter.

Furthermore, the psychologist affirms that there’s a primeval “sub-schema of heterosexuality”. This probably led to the development of the gender schemas we know today.

Thus, the sub-schema of heterosexuality implies that men and women are different from each other. It also implies that sexual individuals (those who identify with their assigned gender and process information through the lens of that gender schema) are predisposed to use this schema in social interactions.

They’ll behave differently towards individuals of the opposite sex, depending on how attractive they are.

Bem believed that gender schemas are limiting for men, women, and society in general. In fact, she believed that raising children free of these stereotypes and limitations would lead to greater freedom and fewer restrictions on the exercise of free will.

For their part, critics of Bem’s theory claim that the author portrayed individuals simply as passive spectators in the development of gendered schemes. They say that she has ignored the complex and varied forces that contribute to gender construction.

Gender Issues: Sexism in Modern Society
In today's article, we're going ot talk about sexism in modern society and how it has evolved over the years. Read on to learn more! Read more »
Link copied!
Interesting Articles
Culture
Are Left-Wing People Smarter?

“Everyday people fix their hair.. Why don't they fix their hearts?" It seems like a smart saying, doesn't it? These words came out of the mind of Ernesto Che Guevara,…

Culture
Together We Can Beat Breast Cancer

Every breast cancer case is different on a molecular level as well as on an emotional level. Some cancers will be more…