Most people think diseases like dementia only affect older adults. However, some types of dementia can be devastating for people as young as forty. 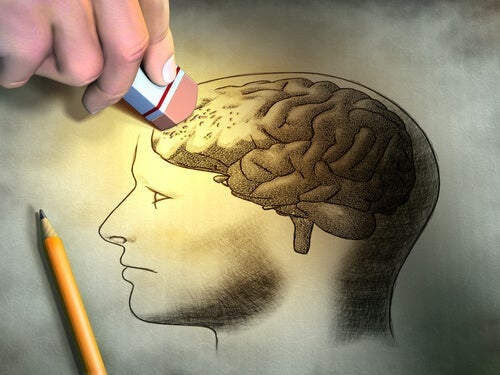 When people hear the word “dementia”, they usually think about something that only affects older adults. However, there are several different types of dementia that affect different groups of people. Some of them can affect younger people, such as early-onset Alzheimer’s and frontotemporal dementia. The latter is the subject of today’s article.

Frontotemporal dementia, or frontotemporal lobar degeneration, is a generic term that refers to a group of uncommon disorders that primarily affect the frontal and temporal lobes of the brain. These areas are associated with personality, behavior, and language and are also areas that tend to lose neurons.

Some people with this kind of dementia experience drastic personality changes and behave in socially unacceptable ways. They might also become very impulsive, emotionally indifferent, or lose abilities related to language or movement. The average age of onset is between 40 and 45 years.

Frontotemporal dementia is the second-most common form of dementia among relatively young adults.

In patients with frontotemporal dementia, their frontal lobes contract or become atrophied. Depending on the particular area of the brain that the disease affects, the signs and symptoms vary.

It’s important to note that doctors often misdiagnose frontotemporal dementia as a psychiatric issue or Alzheimer’s disease. However, as we mentioned above, one more obvious sign of this kind of dementia is that it appears at an earlier age.

Researchers haven’t identified one single cause of this type of dementia, but they have some ideas. For example, some people develop abnormal protein structures in their brains called “Pick bodies”. These structures play an important role in this disorder because they directly affect brain functioning.

That being said, researchers still don’t know why certain people develop these proteins or how to prevent them. Experts haven’t been able to identify other risk factors that could help prevent this kind of dementia.

The signs and symptoms of frontotemporal dementia can vary greatly from person to person. Researchers have identified several sets of symptoms that tend to manifest together and are dominant in groups of people with the disease.

The most common signs and symptoms of frontotemporal dementia involve extreme mood and personality changes. Here are some of the most characteristic:

Changes in speech and language

The least common subtypes of frontotemporal dementia is characterized by movement problems. These problems are similar to those associated with Parkinson’s disease or lateral amyotrophic sclerosis. These are some of the signs and symptoms:

No single test can identify frontotemporal dementia as such. That’s why doctors try to identify certain characteristics and exclude other possible causes.

This type of dementia, as we mentioned above, can be difficult to diagnose. That’s especially true in the early stages since the symptoms overlap with those of other, more common afflictions.

Whatever the cause, many different tests can help doctors reach a diagnosis:

Unfortunately, there’s no cure for this type of dementia, nor is there any effective treatment that will slow it down. The only treatment available to patients is to help relieve their symptoms.

Antidepressants, for example, can help with the behavioral problems that frontotemporal dementia sometimes causes. Antipsychotics can also help with behavior problems. It’s true, however, that medical professionals have to especially careful with these kinds of medications. After all, the side effects include a higher risk of death for dementia patients.

In some cases, frontotemporal dementia can be treated with therapy. For example, if an individual is having a hard time with language, the therapist can help them learn alternative communications strategies.

If you want an employee to perform well, it's important to provide them a fair salary and bonuses or other…

If someone has signs of cognitive decline, it's important that they see a specialist who can provide a full diagnosis.…

Marcelo Ceberio is one of the most outstanding figures in psychology. He's written numerous works, scientific articles, and more than…