Fritz Perls, an interesting Figure in the History of Psychology 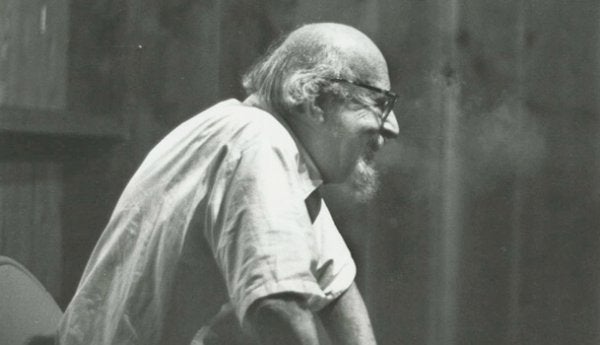 Friedrich Salomon Perls, better known as Fritz Perls, was a German doctor, psychiatrist, and psychoanalyst. He was the father of “Gestalt Therapy.” He was a contradictory and fascinating man who spent his whole life between intellectual circles, theoretical debates, and world travel.

Perls was born in Berlin on July 8th, 1893, in a Jewish ghetto. He had two older sisters, Elsa and Grete. His father, Nathan, was a wine salesman who was often away. His mother, Amalia, came from a lower middle-class family. She left him with a deep interest in art, which stayed with Perls his whole life.

“The goal of therapy is to make sure the patient comes to know when they’re experiencing themself, when they’re seeing their world, and when they’re using their intellect.”
-Fritz Perls-

During an interview, Grete described her brother’s childhood as a bit “wild.” He was a difficult child, but a good student. He completed his secondary education at the Mommsen-Gymnasium in Berlin. This was an extremely strict school where antisemitism was widespread. Perls was expelled when he was 13 years old. As a punishment, his father forced him to work as an apprentice in a candy store.

Perls’ relationship with his father was always very messy. In his diaries he defined his father as a hypocritical man with double moral standards. He believed his father hated his mother and cheated on her with other women. The rejection Perls felt towards his father was so strong that he didn’t even go to his funeral.

Fritz Perls and his encounter with philosophy and psychoanalysis

Fritz Perls made a personal decision to pick school back up at a humanist-oriented school, the Askaniches Gymnasium. That was when he met Max Reinhardt, a theater director who cultivated his love for the art. This lasted until his death.

Later on he started studying medicine. Not long after that World War I started and Perls signed up as a volunteer with the Red Cross. This marked him deeply. But he only spoke about it years later in his biography, “The Agony of Life in the Trenches: The Horror of Living and the Horror of Dying.”

Perls was fascinated by psychoanalysis. He decided he wanted to become an analyst. But he had to move to Frankfurt to take a position as an assistant to a psychiatrist named Kurt Goldstein, who was working on the theory of Gestalt psychology. That’s where he met Laura Possner, a student who ended up becoming his wife two years later. This was despite his family and Clara Happel, his psychoanalyst being against the relationship. Perls was 36 years old and Laura was only 24.

One year later he started working as an analyst in Vienna. In 1928 he became a full-time therapist in Berlin. Between then and 1930, Perls did psychoanalysis with Eugen Harnick and then Wilheim Reich. The second man was one of Freud’s disciples. But he had moved away from Freud’s theories. A lot of the theories that Perls developed later on were inspired by Reich.

The birth of Gestalt Therapy

After Hitler’s rise to power, Fritz Perls escaped to Holland, couldn´t get a work permit. After going through some really hard times with his wife and newborn daughter, Ernst Jones helped him get a job teaching psychoanalysis in Johannesburg, South Africa. Along with his wife Laura, they founded the South African Psychoanalytic Association. In 1936 he was invited to a conference in Prague and the ideas he talked about caused an uproar. He was in a bad place again and moved away from traditional psychoanalysis.

With the help of his wife, Perls started to shape his ideas. In 1942 he moved to New York and published his first book: “Ego, Hunger, and Aggression: A Revision of Freud’s Theory and Method.” Four years later he started the “Group of 7” with other intellectuals. In 1951 he published what some people see as the Bible of this new approach: “Gestal Therapy: Excitement and Growth in the Human Personality.”

The book was born thanks to the help of the poet Paul Goodman, who put a literary touch to it. It’s a complex book that uses ideas from Gestalt Psychology, psychoanalysis, phenomenology, existentialism, and American pragmatism. Later on Perls also added some Buddhist concepts after a trip to Japan.

The destiny of the theory behind Gestalt Therapy was complicated. In 1956 Perls divorced Laura and they both took the theory in different directions. While Laura and Paul Goodman stayed completely faithful to the original principles, Perls moved away from that point of view. He brought in Zen principles, and even some things from Israeli kibbutzes. At the end of his life he acted more like a guru than a therapist. He died from a heart attack after a long trip.

We could say that Gestalt Therapy is a trend that focuses more on the way patients experience their reality than the things they experience. It’s not about what happens to a person. It’s about how that person sees those things. It emphasizes the processes and not the content. This focus is part of humanist psychology and puts forward three basic principles:

The three principles of Gestalt Therapy

Fritz Perls’ Gestalt Therapy proposes a process of intervention to help someone redesign their representations of reality. It should also help them reorient themselves towards a more independent life. They should be able to focus on their own potential. People have applied it in many different fields: the clinical, the social, and even the workplace environment.

4 Keys of Gestalt Therapy to Treat Depression
Treating depression with Gestalt therapy is a both interesting and useful strategy. For example, it helps us readjust to our reality in a more creative way, resolving emotional blocks so that we can relate better to ourselves and everything around us in a more valid and secure way. Read more »
Link copied!
Interesting Articles
Psychology
Depersonalization Disorder: The Feeling of Living in a Dream

Emotions are like an internal compass. They guide us and, most of the time, push us to take some sort…