I Am Free, Whether You Like It or Not 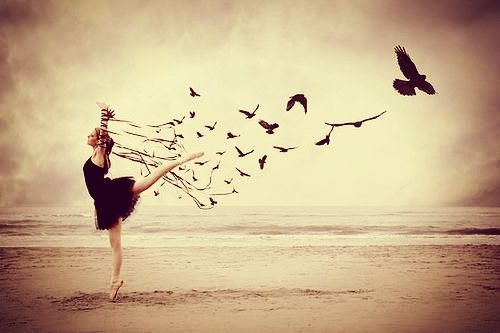 I am free, even though some don’t like that fact. As human beings we have fought for our freedom. Sometimes to define ourselves in our individuality, other times so that this definition brings us closer to a specific group. This fight is a greater one for women, because we have to fight for whatever new thing we do to be accepted. The same applies to other groups, such as homosexuals, lesbians or transsexuals.
I’m not exaggerating at all. Just a few days ago a woman challenged the core of Iraqi society by the simple fact that she dared to ride a bike. She wanted to claim her right to be able to ride it, just as they were able to in the 60s. Others watched her but, with a broad smile, she seemed to simply say: “I am free, whether you like it or not”. Does this censorship affect us too? Read on and find out…

Freedom reaches its limit when it is used to harm others

Freedom reaches its limit when it is used to harm others and try and remove their right to be free. But this does not come by mere chance: all these limits become a source of power for those who have managed to remove them.
Many people have suffered and continue to suffer because certain people don’t want to let others live in peace. They interfere, they investigate, they can’t stand that their opinion about other people’s lives is ignored. Often they feel they have to dictate in some way over situations and people. They suffer from a mental and social pathology called intolerance, which spreads bitterness wherever it goes.

We do not have to travel too far to find examples. Right here, in our streets, an orange bus claiming freedom of expression has spread a message we could regard as intolerance through many cities in Spain. They said that boys have penises and girls have vulva. That’s objectively true, right?

Transsexual men and women go through a complex process to show the world how they see themselves, but in it they reaffirm their identity of what they always were. Respect, empathy and naturalness is the only thing they deserve.

The harmful part of this case is not the message, but in how its objectivity conceals its malice. That general objectivity excludes many objective biases that can not be ignored. The hard part is that it comes from people who call themselves educated, who try to propagate the idea that what we consider natural is actually an illness or a perversion.

These propagators have studied the Klinefelter, Turner and Morris syndromes very well. As well as congenital adrenal hyperplasia and the persistent Müllerian duct syndrome (SCMP). They know perfectly well that sex chromosomes do not define sexual identity or the coherence between biological sex and gender, which is a social construct. They have read the studies of Margaret Mead and dozens of scientists or anthropologists.

The propagators of hate are not ignorant. They may not be dressed in clothes that show them to be radicals of a certain  ideology, but that doesn’t stop them being what they are. You won’t cross the road to avoid them because they know how to dress up their hate messages with a veneer of supposed education.
The same ones that promote the acceptance of certain congenital conditions, the acceptance of any type of deformity in any embryo or fetus, tell us that we shouldn’t be confused about the topic of transsexuality. What do they actually want? That is the question we need to ask ourselves.

They seem to tell us that everything to do with sex which isn’t in line with their beliefs should be condemned and censored. From their perspective these things only generate confusion and discontent. They may know the truth, but they fear it could take away their power. They know that blowing open gender roles is the strongest weapon to end the great dynamics of power, of their power. The one that creates inequality, fear and intolerance. Much more powerful than any current account. These are not their values, they are their legacies and it’s how they mark out their stand.

They cling to their closed, globalized answers, because they are afraid of any question that might make them think they are wrong.

They know that sexual and reproductive freedom doesn’t produce slaves. It increases the quality of life and optimizes education and the distribution of wealth for everyone. They know that our free access to information means that nobody wants to be complices in their silence regarding these messages of hatred.

Sadly they have succeeded in getting people to talk about them and, much to our dismay, they will have also won many followers. Their message may mean someone getting a beating at the door of a nightclub, in possible killings of transsexuals in many areas and in a stigma as absurd as its message.

I am free and I’m going to speak out

As a free woman, with the sex, gender, tendencies and sexual practices that make me happy (as long as there is consent and they don’t inflict harm or unwanted suffering on others) I want to speak out. For all those they have hurt with that message, for all those who have struggled for centuries to be allowed to live in peace.

I am free, regardless of what people think. I live my life without hurting anyone. And yes, I smile, I say thank you and I continue to be moved by the kindness of a child and at the gaze of a dog.

I read, I keep myself informed and I never judge anyone based on where they’re from. Sometimes I harbor feelings of hopelessness, loneliness and fear. I am worried about the health of my loved ones. I feel happy because of the unconditional acceptance they feel for me. First and foremost I am a normal person, like so many others.

I am free and it doesn’t seem right to me than you can attack innocent people, either verbally or non-verbally. It is time you kept that hatred for yourselves, administering it in whispers among the thousands or millions who share your ideas.

I’m sorry but I’m free. I feel sorry for you. Neither your poisonous looks, nor your hatred nor your censure affect me psychologically. I know very well how you want to play the game. So please stop interfering in our lives with laws, manifestos, buses, insults and victimization.

We are free and if you don’t like it, it’s not our problem. We will be here to defend ourselves only when we are attacked and to show solidarity with others when they are being attacked.

If they receive insults then understand that we already learnt that to turn the other cheek is fine for one offense but not for constant ones. One has to accept that if he sows the wind, he will reap the whirlwind. Accept it, ladies and gentlemen. We’re free. If you can’t stand it, it has long ceased to be our problem. You’ll just have to deal with it.
We should never have to make manifestos, they are for those who are afraid of the freedom of others. We should instead manifest our joy and our mental independence, and also our resistance to the ideological colonization of the hatred of diversity.

As Virginia Woolf said: “There is no barrier, bolt or lock that you can impose on the freedom of my mind“. That’s where they can never get in – that is the heart and freedom of our lives. In addition to that, we can exclaim with victory that we, the brave and the free, are winning more and more of these battles. That is a source of pride, although there is still a long way to go.

Migraines and dopamine share a direct link that not everyone is aware of. When a person suffers from migraines, their…

Humanity has had to deal with challenges that are ever-increasing in their sophistication. It happens at a frenetic speed and…