Food Phobias Aren't Due to Fear of Gaining Weight

Have you ever heard about food phobias? These are conditions that can have serious consequences and limit people's lives. Read on to find out more about them. 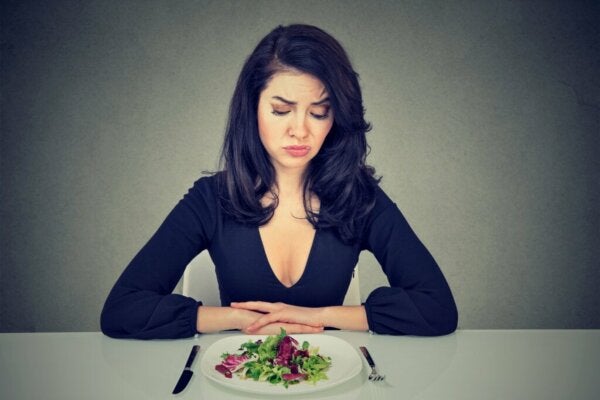 How many types of phobias have you heard about? There are probably hundreds of them, although some are more common than others. There are phobias to dogs, to the darkness, and to heights, among others. Surely you or someone close to you is or has fallen victim to one of them. In any case, there are some lesser-known clinical fears that are rather disabling and you may have never heard about them. Food phobias, for example.

These are a family of phobias that include everything from fear of trying new foods to fear of swallowing food to fear of eating certain types of food out of fear of poisoning. Eating is a primary need and not doing so could lead to serious consequences.

What are the most common types of food phobias? Are they related to other eating disorders, such as anorexia nervosa? What are the consequences? Here are some answers to these questions and more.

“Sometimes just a little bit of light is enough to turn phobias into fluttering butterflies.”

What exactly is a phobia?

It’s a reaction of irrational fear to harmless or kind of harmful stimuli that most people keep under control. Perhaps because the person who’s afraid has the resources to confront it.

Phobic responses are maladaptive and can affect people’s daily lives. Thus, they require attention and subsequent treatment. Even more so when the phobia affects a basic physiological need such as food.

You may not know it but phobias usually appear during childhood or adolescence and are usually learned. The direct experience with the phobic stimulus, vicarious learning (by watching others), is the main way to acquire a phobia. For example, having nearly choked on a peanut could be enough to acquire a peanut eating phobia.

Similarly, there’s the rather curious Garcia effect, which is the fear of experiencing food poisoning. This effect explains why people systematically reject certain types of food (or similar flavors) that at some point made them sick.

There’s a conditioned aversion to taste when you experience food poisoning or when it leads to discomfort (even if only slightly). This is because your brain connects the flavor with unpleasant sensations.

There are many different types of phobias, but today’s article will focus on the already mentioned food phobias. What are they and how many types there are?

Getting into the subject of food phobias

These are a family of phobias related to various aspects of foods. It could be the fear of trying new foods, the fear of swallowing them, the fear of food poisoning, or the fear of eating a certain food group. Like most phobias, food phobias are usually learned, as we mentioned above.

The main consequence is the active avoidance of the phobic stimulus. In fact, it can lead to an exaggerated restriction and malnutrition.

Neophobia, the fear of unknown foods

This refers to the refusal to try new foods. It literally means “fear of trying unfamiliar foods”. Neophobia is a frequent phenomenon during childhood, especially around the ages of two or three. However, it tends to disappear after the age of five. It can continue until adulthood, though.

There’s an evolutionary explanation for this phenomenon. One could say food neophobia is a defense mechanism. This is because unknown foods were a risk back when people used to collect their own food, as it often led to intoxication and even subsequent death.

Actually, there’s a genetic predisposition for this type of phobia. Estimates indicate that 78 % of the cases of food neophobia are genetic. In addition, learning has a fundamental role. In other words, to a great extent, children learn by watching their role models (parents and older siblings). So you would expect them to repeat what they see at home. Thus, when their models refuse to taste a certain food, the little ones will repeat it because they think it’s the right thing to do.

Phagophobia, the fear of swallowing food

This phobia is about the fear of swallowing food produced by a bad experience of choking or suffocation while swallowing. Unlike neophobia, it can occur at any age.

It’s logical to think that you’ll reject a given food if you’ve been on the verge of choking on it; you don’t want to go through it again. The problem is that this fear can become generalized and extend to other types of food. It would greatly limit the range you can actually eat. For instance, some people end up developing a phobia towards all kinds of foods, even liquids.

For instance, they’ll begin eating liquid or crushed foods out of fear of swallowing solid foods. These people should start eating easily crumbly and chewable types of foods. Then, they move on to solid ones, from smaller to greater consistency.

Similarly, they could start by using thickeners to change the texture of the liquids in order to maintain proper hydration if the phobia is about drinking liquids. Then, they can progressively reduce the proportion of thickener.

Cibophobia, the fear of allergic reactions and intoxication

This type of phobia is more related to food safety in general. It’s the fear of possible food poisoning or allergic reactions. These people thoroughly check the condition of the food before they eat it, as well as the expiration dates.

This phobia is closely related to the Garcia effect we mentioned earlier. It’s usually widely associated with having had food poisoning or an allergic reaction after eating a certain type of food. However, the fear can extend to many other kinds of food from the same family, even though it started with a specific food.

Mycophobia is the fear of eating mushrooms due to the possibility of poisoning. The curious thing about this phobia is it isn’t limited to the ingestion of mushrooms. It can actually become generalized and cause aversion and fear of the simple fact of seeing or touching one of these specimens.

Similarly, lachanophobia is the fear of vegetables, be it a specific vegetable or an entire family of them.

It’s strongly associated with traumatic situations experienced in childhood, related to forced ingestion. For example, having been forced to eat these types of foods in spite of having gagged on them. Or perhaps having had to eat the spinach from the previous dinner. It could also be related to having found some bug in them.

As you can see, food phobias can become generalized even when a particular type of food triggered them at the beginning. Furthermore, it can limit the variety of food people eat and, therefore, the quality of their overall diet. Thus, it can subsequently lead to an exaggerated drop in weight.

Being underweight is a common symptom in some eating disorders such as anorexia. However, the weight loss in this condition is produced by a deliberate reduction in the quantity and variety of the food, as a way of controlling the weight, in this case.

This is the main difference. Food phobias center on aspects that are closely related to the food itself. For example, the family to which it belongs or its faulty preservation. In contrast, anorexia is about the pathological fear of gaining weight.

That is why it’s important to explore what could be behind being underweight. That is, what kind of fear has led to such weight loss? This is because different disorders require different approaches.

Some observations on the treatment of food phobias

Intervention in anorexia begins with nutritional rehabilitation for the purpose of ensuring the patient’s biological stability. Then, the therapist moves on to dealing with a person’s cognitive level, their distorted perception of their body image, and their overvalued beliefs about body weight, among others.

In the case of food phobias, it may be necessary to restore the weight as a first measure if the consequences are serious and have been around for a long time. However, the treatment of the phobia has to be more directed to promote progressive contact with the phobic stimulus to try to decondition it.

Fatphobia, the Only Elephant in the Room
Fatphobia is a basic element, disguised as sustenance, that only leads to frustration and pain and affects those who don't have a low BMI. Read more »
Link copied!
Interesting Articles
Clinical Psychology
Pure O: What Is It and How Can You Combat It?