Mowrer's Two-Factor Theory: This is How Your Fears Work

Phobias, anxiety, and paralyzing anguish... the mechanics of fear aren't as mysterious as you probably think. Learn about them with us! 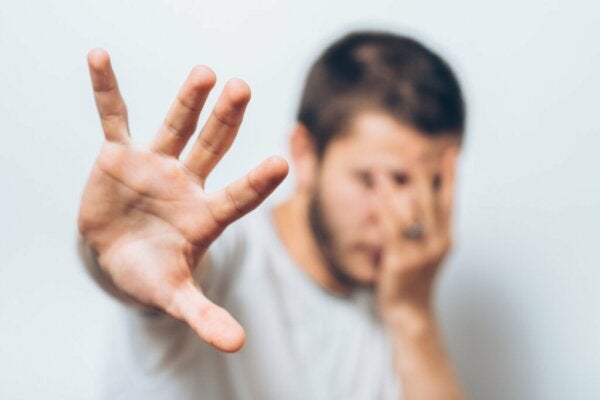 Despite the fact that Mowrer’s two-factor theory was enunciated in 1939, it remains one of the most interesting models for two reasons. Firstly, it allows you to understand fear mechanisms and how anxiety disorders and phobias occur. The second reason is that it gives a valuable starting point to deal with many of those manifestations in which fear sets limits on well-being.

To speak of anxiety is to refer to fear and anguish. No dimension is as complex as fear itself. So much so that the poet Horacio said that whoever lives in fear will never be free. Few arguments are as true as this, however, nothing’s as typical of the human being as holding on to concerns and fears.

It makes sense, after all, as they’re a part of human nature and serve as survival mechanisms. Nonetheless, on occasions, they may lead an individual to a pathological state. In case you didn’t know, panic disorders, obsessions, or phobias orchestrate the daily lives of thousands and thousands of people and keep them from living a normal life.

These states are overbearing, taxing, and difficult to explain to someone who doesn’t experience them. Understanding the most basic mechanics of fear can help you unmask your worst enemy. Let’s delve a little deeper into this subject.

“The fear of facing your fears is harder to overcome than the fear itself.”

Mowrer’s two-factor theory: what does it consist of?

Mowrer’s two-factor theory was enunciated by Orval Hobart Mowrer in 1939. This American psychologist and psychology professor at the University of Illinois is best known for his research on behavioral therapy. One of his interests was to learn where phobias come from and why they’re so difficult to eliminate once they’ve arisen.

It’s quite useless, for example, to explain to someone who has a fear of airplanes that the chances of dying while crossing a traffic light are higher than in a plane crash. The mind clings to certain ideas and maintains them over time until they completely change our behavior. Dr. Mowrer was a pioneer in this matter. In fact, he shed light on the mechanisms behind many anxiety processes.

In the example above, you can see two dimensions that define Mowrer’s two-factor theory. Let’s expand on them.

Dr. Orval Hobart Mowrer focused his research on behaviorism. For that reason, he established that the first process that mediates the appearance of phobias and many anxiety disorders is classical conditioning.

After suffering the impact of classical conditioning (a specific stimulus acquires a painful connotation), it’d be enough to just avoid that situation to return to normal. However, when it comes to phobias and anxiety, the brain works differently.

That’s when the second phase, instrumental conditioning, comes into play.

Let’s move on to the workplace example. If the individual was bullied by their co-workers, it’d be more than enough to just leave that job for their suffering to end, right?

Therefore, the individual isn’t just avoiding the original aversive stimulus but everything that comes close to it.

How can Mowrer’s two-factor theory help you?

Mowrer’s two-factor theory shows the irrational foundation that many fears have and how they keep an individual from living a normal life. Firstly, it’s okay to flee from what hurts, from what acts as a real threat. However, many of the phobias and fears aren’t logical or guarantee our survival. On the contrary, some fears do nothing but hinder our growth.

Exposure techniques are very suitable for dealing with these psychological realities. Putting yourself before the terrifying phobic stimulus and rationalizing that fear is always a good step. Likewise, brief strategic therapy is also a good resource to unblock everything that limits you and that leaves you submerged in your fears.

Fighting your fears is your responsibility. Make use of the tools you have to do it.

“Courage is knowing what not to fear”.

The Body Language of Fear
The body language of fear manifests in facial microexpressions. Slightly raised eyebrows and a half-open mouth are signs that someone us scared. Read more »
Link copied!
Interesting Articles
Psychology
How to Improve Communication in a Relationship

Arguments tend to attract negative emotions like honey attracts bees. These conflicts often arise due to communication issues -- we…

The divorce or separation of a child's parents is usually very traumatic for them. Their family, which they considered to…

Wilhelm Wundt is seen as one of the most important and renowned psychologists of all time, even being called the "father…

Psychology
The Art of Living in the Present Moment

Living in the present seems obvious, and though it should be, it's actually the exception. Why? Because truly being present is…