There's a lot of scientific data about love that's against the magical perspective portrayed in film and literature. Today's article will discuss five surprising scientific facts about love. 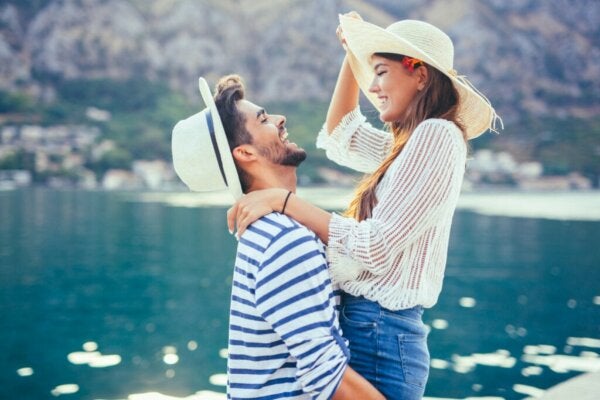 Scientific studies continue to reveal more and more facts about love. Many of them are quite surprising because the research has allowed humans to verify that the feeling poets and singers talk about is much more related to the brain and hormones than to dreams and illusions.

Scientific data on love is a reminder that falling in love is mainly about physics, chemistry, and biology. Yes, it doesn’t only come down to this because it also acquires meaning within the mind. In fact, it shapes the perceptions about your life and your relationships with others.

Romantic love is and forever will be a source of motivation and dreams. It enriches your life and makes you more creative and happier. In addition to this, scientific data on love explains that this feeling causes interesting physiological reactions and that almost no one escapes its spell.

“True love is like ghosts, which everyone talks about and few have seen.”

1. The first of the scientific facts about love is that it’s like being drunk

When people say they’re “intoxicated with love,” you should take it literally. A study published by the Neuroscience & Biobehavioral Reviews journal in 2015 reveals that loving feelings are, indeed, “similar to drunkenness”.

The research, conducted by scientists at the University of Birmingham, indicated there’s a high release of oxytocin during the infatuation period, also known as “the love hormone”. The effect this substance causes in the body is quite similar to that of excessive alcohol intake.

2. It can modify the brain

A team of scientists from Hanoi University of Science and Technology in Vietnam published an interesting study in the Frontiers of Human Neuroscience journal. In it, they announced an experiment conducted with 100 volunteers, some of whom were abandoned lovers who had recently broken up and felt lonely.

The researchers examined the brains of these people using MRIs and found that the lovers had greater brain activity in the areas related to motivation, reward, and social skills. In fact, their brains were remarkably similar to those of addicts.

3. Love has nothing to do with chocolate

There’s a prevalent belief that love sorrows are easier to forget when you eat chocolate. According to them, this substance has some components that balance the chemical effects the absence of the loved one leaves on the brain. Thus, those who go through a disappointment often begin to consume cocoa in all its forms.

One of the scientific data on love indicates this belief is absolutely false. While it’s true that chocolate has phenylethylamine, a substance that also appears during infatuation, love makes it occur naturally. Also, it has no effect when ingested through the digestive tract.

When someone loves another person, they often say they do “with all their heart”. However, they should also add the stomach to that description, at least according to the revealed scientific data on love. The famous fluttering butterflies in the stomach do exist and people feel them when they’re in the presence of their loved one.

It’s a kind of tingling that feels like a “happy sort of fear”. Science revealed this occurs because there’s an association between the brain and the digestive system. For instance, seeing the person you like can trigger many physiological reactions, such as a light fast throbbing in the stomach.

This scientific fact doesn’t have anything to do with love, strictly speaking, but rather with fidelity. As you may already know, some species of animals mate for life. Why do they do it? Well, their reasons aren’t particularly romantic.

In some cases, it happens because there are few specimens. Other times, it’s related to the hatchlings being very vulnerable to a hostile environment. Thus, staying together improves their chances of survival. The available information indicates that only 5% of the species are monogamous and that it’s due to a practical reason in all cases.

Be that as it may, love is amazing. It leads you to intensely experience each sensation. It also makes you more dynamic and sensitive. Call it anything you like, chemistry, physics, biology, or semantics, but love is always worth it.

Understanding Relationships: What’s True Love?
True love isn't magic. It is a love that allows you work together toward common goals, while respecting each other's personal growth. Read more »