Only some of Antonin Artaud's quotes give us a glimpse of his tragic existence. He was a genius who spent his life creating great literature and being locked up in psychiatric hospitals. Many consider him the father of modern theater. 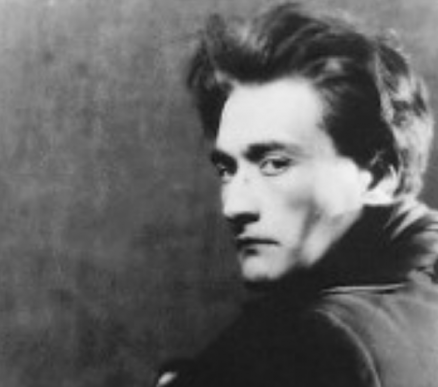 Antonin Artaud’s quotes are beautiful. Antoin explored practically all literary genres, although he became famous as a poet and playwright. As a matter of fact, he’s known as the creator of the Theater of Cruelty.

One can say that all modern theater resorts to the philosophy this extraordinary French writer believed in. Many of Antonin Artaud’s quotes speak precisely of theater, but also of other human realities he discovered during his most difficult times.

When he was four, Artaud contracted meningitis. When he was nine years old, his sister died suddenly, which immersed him in a grieving process he didn’t completely overcome. That was, perhaps, one of the extremely difficult experiences that led him to become such a deep writer. Let’s see some of Antonin Artaud’s best quotes.

“We do not die because we have to die; we die because one day, and not so long ago, our consciousness was forced to deem it necessary.”

“Life consists of burning up questions.”

This is one of Antonin Artaud’s most beautiful quotes. He associated life with the essential ignorance that characterizes it. We’re all born clueless, hardly knowing anything, and we die having answered only some of the questions we had in mind.

Artaud doesn’t refer to that ignorance from an intellectual point of view. That’s why he uses the word “burning”. He represents the unknown with a burning flame. We don’t know where we’re from exactly, where we’re going, or why we’re here.

2. The meaning of true theater

“A real theatrical experience shakes the calm of the senses, liberates the compressed unconscious, and drives towards a kind of potential revolt.”

This quote expresses how Artaud really felt about theater. He always said that words were unnecessary since there were other more effective ways to communicate one’s feelings and thoughts. One of them was, evidently, theater.

He loved theatre and hated cinema. He saw the latter as a “harmless poison”, intrinsically negative but not causing serious damage. For Antonin Artaud, theater was the best way to express yourself. It was created to teach life lessons to humans about death, suffering, and decisiveness.

3. One of Antonin Artaud’s quotes on being

Many of Antonin Artaud’s quotes reveal an intense and almost violent spirit. His childhood illness turned him into an extremely nervous individual. In fact, he developed paranoid delusions over time because of it.

This explains why Artaud spent many years in psychiatric hospitals. This quote in particular, although expressed in an aggressive way, reveals a true, raw message. Human beings aren’t only sublime, they’re also prosaic and obnoxious.

4. The language of words

“It has not been definitively proved that the language of words is the best possible language.”

Antonin Artaud was very interested in learning about mystical phenomena. He was very devoted to religion during his childhood and overall youth. Years later, he felt like searching for a new kind of spiritualism, which even led him to live with the Tarahumara community in Mexico.

His particular outlook on life made him very sensitive to the most subtle phenomena. He became deeply involved with the Tarahumara community despite the language barrier. Perhaps this quote alludes to the fact that words are just one of many ways to communicate and understand those around you.

5. Antonin Artaud and the importance of life experiences

“Admittedly or not, conscious or unconscious, the poetic state, a transcendent experience  of life, is what the public is fundamentally seeking through love, crime, drugs, war, or insurrection.”

Artaud was, above all, an explorer of the human spirit. After his time in Mexico, he delved into some esoteric practices such as astrology, Tarot, and numerology. His obsession with these topics led him once again to a state of extreme nervousness.

In 1938, he was deported from Ireland to France for “exceeding the limits of marginality”. He then spent nine years in a psychiatric hospital. He suffered a lot during this time. All these experiences ratified his hatred for psychiatry.

Antonin Artaud died in 1943 after undergoing several electroconvulsive treatments that destroyed him both physically and mentally. Thanks to a group of friends, he was able to spend the last three years of his life away from mental institutions.

“I, myself, spent 9 years in an insane asylum and never had any suicidal tendencies, but I know that every conversation I had with a psychiatrist during the morning visit made me long to hang myself because I was aware that I could not slit his throat.”

The gaslighting phrases listed in this article can definitely make a person question their sanity. However, they're not written in…