The Importance of Poetry 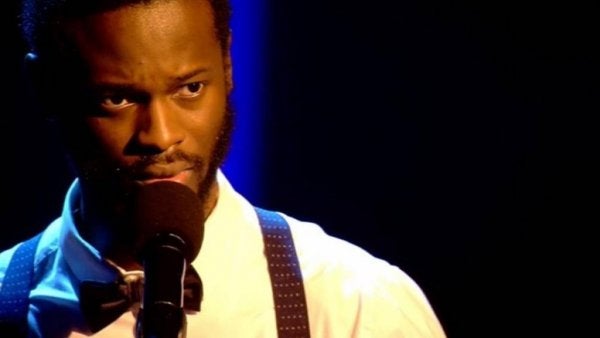 Something surprising just happened. A poet has won the Spanish equivalent of the Got Talent television contest. César Brandon, a 24 year old, has managed to captivate the public simply with his words. No frills. Just poetry. Alone, on a large stage, in front of hundreds of people, he has reached their hearts with his words. No singing or gesturing, just reciting his poetry.

Cesar’s life has not been an easy road, nor free of obstacles. Born in Equatorial Guinea, he emigrated to Spain seven years ago. If writing poetry is not something just anyone can do, imagine how difficult it is doing it in a language that isn’t your mother tongue. While he’s obviously not lacking in skill, we know that without effort, hard work, hope and perseverance, success is usually not possible.

César made himself known to the general public with a poem entitled The poetry of Zero. In it he tells the story of how zero finds one and are very happy together. That is until he ends up leaving one for minus one. A metaphor of numbers about true love. A love that does not always last.

With much humor and a quick tongue, César recounts the adventures and misadventures of two numbers. But it is far from being an absurd and empty poem. Poetry, with all its metaphors always gives us plenty to think about. It makes us see different interpretations, possibly far removed from what the poet was thinking about, but very relevant to us. We find an example of this at the end of the poem. “He began to start counting, up to a number he was afraid of, the infinite maybe, or, perhaps the number two.” How close are our fears to us?

Then, with a more dramatic tone, Cesar again amazed the audience telling us the story of two other lovers. This time they were very shy ones. The Earth and the Moon. In this wonderful poem, César describes the hypothetical chat up lines the earth might use to try and conquer the moon. For example, “on earth we were all citizens of a place called the first world because the second mattered little to us, and the third was in the process of development“.

The poem is loaded with social criticism. Verses such as “refugees are not made of opinions on the Internet” impact the listener greatly. Life is not easy. As Cesar says, “Two people fight, even though one doesn’t want to and nor does the other. One thinks that two isn’t enough and looks for three more and the four of them try to be happy. The problem is multiplied, and four ends up calling 016 (the Social Services number in Spain)”.

The last poem, the one he won the contest with, had a more solemn tone. The poem, as the name suggests, was dedicated to his mother. In it he compares her with the predetermined parameters of Microsoft Word. He prefers his mother not to have “the body of the Calibri, size 11 and one point line spacing”. He wants her to be “straight, double spaced and in Times New Roman”.

Regretful of his youth, César highlights the teachings of his mother that he didn’t know how to value at the time. He doesn’t underestimate the father figure either, and says that they are “all those whose dreams are too small for them, they need little sleep to fulfill them”. In this poem he gives us a real lesson in humanity.

His victory represents a landmark to lovers of reading and writing. César has enabled something as discredited as poetry to be on everyone’s lips. All this in a country where the average person reads less than a book a year. Where the most popular are devoid of any kind of culture or respect. Where the ridiculous things are valued more than skill and work. In that country, César Brandon has been able to fulfill one of his dreams. Although he is undoubtedly very grateful, we should also be grateful, because he has reminded us that we still know how to dream.

Poetry is also psychology. To paraphrase Eduardo Galeano: “scientists say that we are made of atoms, a little bird told me that we are made of stories“. The people are the stories,  stories that can be told in many ways. That’s why diversity, multiculturalism and open-mindedness are so important. The greater our vocabulary, the more beautiful our history will be. Behind the opportunities is wonderful talent.

Today I'd like to share with you a beautiful tale "The Seeker", written by Jorge Bucay, in which he invites us to reflect on how to live a full life.…

Miyamoto Mushashi was a famous samurai warrior in the feudal era of Japan. He was the author of the famous The…

Culture
I Need Help: I'm Tired of Doing It By Myself

I need help. I've used up all my strength. I'm tired of doing it by myself and pretending that I…

Culture
Your Reality Is Not Mine

I am ready to share this reflection with you, going out on a limb simply so that you, the one sitting at the other end of the screen, do not…