The Origin of Death According to Japanese Mythology 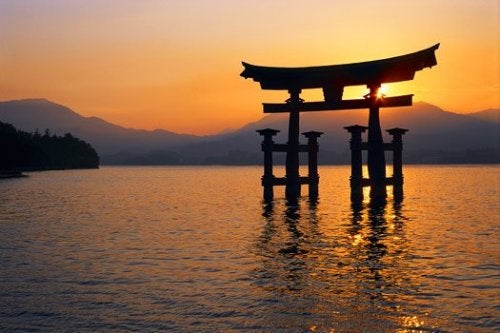 The origin of death according to Japanese mythology is found in a curious legend about the creation of Japan. Despite the influence of the ancient Chinese civilization, a very important part of Japanese religion is unique. Additionally, it contains Shintoist and Buddhist traditions, as well as popular agricultural beliefs.

Conventional Japanese myths are based on Kojiki and Nihon Shoki. Kojiki literally means ‘record of ancient matters’, and is the oldest book about myths, legends, and the history of Japan. Nihon Shoki is the second oldest and it narrates the different deeds of the deities.

In this article, we explore the origin of death according to Japanese mythology through this wonderful legend.

“Death is not the opposite of life, but a part of it.”

The legend about the creation of Japan

At the beginning of time, the first Japanese gods created two divine beings: a man by the name of Izanagi and a woman, Izanami. These ancestral gods entrusted them with the mission of creating a wonderful land.

Years later, when they completed the mission, they decided that it was time to have offspring. The eight great Japanese islands were created from their union.

Harmony reigned in the new world. The divinities lived together with their numerous children until Izanami spawned Kagutsuchi, the god of fire. After a very complicated labor, Izanami died.

Izanagi suffered a lot when Izanami died. Instead of burying her body in Mount Hiba, the legendary mountain near Izumo, he decided to search for his beloved in the kingdom of Yomi, the land of the dead.

Izanagi set out to the land of darkness and began searching for his beloved wife. All the demons he was with warned him that Izanami could never go back. In other words, they told him that she couldn’t return to the land of the living if she had already tasted the Yomi fruit.

After many months of hardship and suffering, Izanagi finally found his wife in a place where darkness reigned. But it was too late: she had already eaten the food of the underworld. She told him that she couldn’t go back with him. However, she was going to try to convince the Yomi leaders to let her return.

The gods’ only condition was that Izanagi couldn’t look at his wife when he returned to the palace. However, he did not resist the temptation. Thus, he lit a small flame and entered the palace. With the light, Izanagi broke the law by disturbing the harmony of the darkness. He gazed at his wife’s body, which had turned into a rotten corpse.

The god fled in terror while his spouse accused him of shaming her. She chased him throughout the Yomi kingdom, trying to kill him. After incessant harassment, Izanami pierced her husband’s body with a spear, leaving him badly injured.

The father of creation ran and ran until he felt an outside breeze. Despite his wounds, he reached the realm of the living. With the strength he had left, he sealed the thin crack that separated both worlds with a large rock.

From inside the cave, Izanami shouted to her husband to allow her to enter the kingdom of the living. But terrified by everything he had just witnessed, he flatly refused. The goddess then threatened her spouse with killing a thousand humans every day. To this, Izanagi replied, “Then I will give life to another 1500 beings each day”.

This is how death spread throughout the Earth.

The origin of death according to Japanese mythology

Japanese culture considers death a filthy thing that has to be purified. Therefore, it’s necessary to cleanse, aromatize, dress, and prepare the person who has died so that their soul can go to the world beyond.

How Can We Learn to Accept Death?
What is the use of thinking about death? Why accept death as an inescapable fact? They're questions many ask. The answers have changed a lot over history. Read more »
Link copied!
Interesting Articles
Music and Psychology
The Feminine Archetypes and Transformative Anger

Culture
Meditation Can Renew Your Brain in 8 Weeks

Meditation can transform our brain in 8 weeks. It modifies the areas related to memory, empathy, and stress, as well as…