Some dependencies, when well-managed, contribute to people's development. Others, on the other hand, only hinder their personal growth. For this reason, it's important to identify and break free from them. 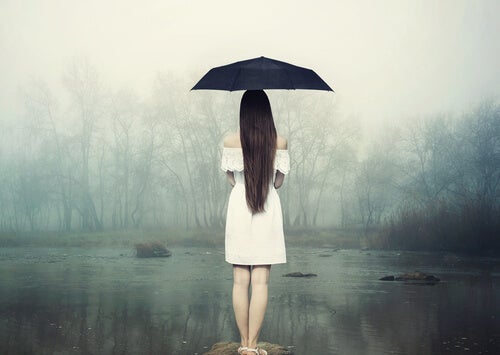 In some way, human beings will always be dependent on something or someone. That’s just the way things are. Now, this isn’t negative in itself, but it is important to do something about it. It’s vital to modulate and decant said dependencies so that they don’t interfere with what you really want or your personal development.

There are reasonable dependencies that, when properly molded, are healthy for an individual’s development. For example, interdependence with a partner or family member. The healthy need and mutual response that you build with someone strengthens your emotional world in a great way.

On the other hand, however, other dependencies bring unhappiness. These don’t contribute to your well-being. Instead, they have the power to make you disconnect from yourself. Ultimately, they put you at the service of something or someone, without a fair consideration in return. In this article, we’re going to be talking about some of them. Let’s begin.

Depending on other people’s opinions means letting your behavior, likes, and desires be determined by the approval of those that surround you. In other words, you don’t really focus on reaffirming yourself but getting acceptance from others.

Moreover, being dependent on this means giving criticism ridiculous value. People often experience it as an emotional wound that affects them more than it should. As a consequence of this, they guide their life projects, dreams, and behaviors in accordance to what others may think. This is one of the most corrosive dependencies, as it alienates people and turns them way too servile.

2. The fear of abandonment

The fear of abandonment is associated with a deep dependency. It usually affects those whose childhood was full of situations of deprivation, helplessness, or neglect. As a result, in them, there’s a void that nothing and nobody ever manages to fill, so they carry it over like a fresh wound.

Generally speaking, fear of abandonment isn’t conscious. The person simply develops excessive attachment behaviors with those close to them, as if they became their object of love. This usually happens with the individual’s partner or close friends. There’s a fear of losing them, which leads the person to act possessive and anxious.

3. Fashion, one of the five dependencies that bring unhappiness

Many people consider fashion to be a superfluous and inconsequential subject. Despite this, few are able to distinguish their own tastes and style from the current fashion trends. Now, we’re not only talking about clothing or accessories here but about general preferences and even ideologies and philosophies.

For example, on one hand, many people wonder if the vegan lifestyle is really the result of reflection and conviction. On the other, many believe people only do it to gain followers or join a trend. That desire to hop on a train and be part of the majority sometimes leads to dependency. Some become truly concerned about not being “in style”. Consequently, their own sense of identity is lost and distorted.

When it comes to dependencies that bring unhappiness, physical appearance is definitely a big one on the list. It’s okay to take care of your appearance. However, some people give excessive importance to this, to the point where it becomes an addiction. As a result, they end up believing that their worth as human beings is defined by the way they look.

Furthermore, it’s true that physical appearance has a great weight in today’s world. Nonetheless, it’s also evident that it’s a very dangerous and ephemeral game. We can’t lie; beauty opens doors to some individuals. Also, it makes it easier for some to climb to the top. However, it doesn’t serve much beyond that initial chapter. Depending on your physical appearance is like depending on an illusion.

Money is one of the most dangerous dependencies that bring unhappiness. This might seem paradoxical since many people believe money equals happiness. However, when the individual begins associating their personal value with the amount of money they have, it becomes a problem. Having and not having money is a sequence that’s present in pretty much everyone’s life. Only a few people in the world are able to maintain an uninterrupted comfortable financial situation.

Relying on money sometimes means believing that happiness equals consumption. Supposing that your value depends on your wealth is the key to unhappiness. To those who think this way, not having money is equivalent to losing everything, including themselves.

All of these dependencies are harmful because, instead of bringing well-being, they bring people down. They end up taking away more than they give. Of course, they involve alienation or disconnection with the most genuine part of oneself. To sum things up, we’d like to advise you to think of yourself as a kite. Tied to a point but free in flight.

What Do You Know about Dependent Personality Disorder?
Dependent personality disorder is characterized by the persistent and excessive need to receive care. This entails behavior of submission and attachment, Read more »

Link copied!
Interesting Articles
Personal Development
The Difficulty of Making the Decision of Seeing a Psychologist

When a person suffers from a physical ailment, they go to the doctor without even questioning it. Think about it.…