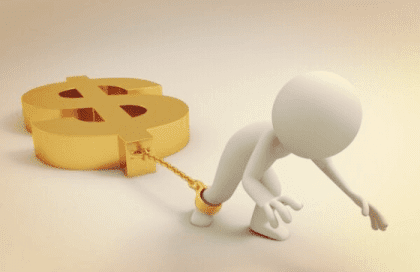 Easterlin’s paradox is both a psychological and economic concept. Oddly enough, these two sciences have a lot of common ground nowadays. One of the things they have in common is the idea that links having money and consumption capacity to happiness.

No one can deny the importance of money. However, we’re constantly hearing that money and happiness don’t go hand in hand. At the same time, we also feel frustrated when we don’t have enough money to buy something we want. It can be anything, from a trip and clothes to a better medical service and a new car.

“It’s necessary to have the appetite of the poor to enjoy the fortune of the rich.”

Easterlin’s paradox reinforces the idea that having money and being happy aren’t related. Let’s delve deeper into this interesting idea.

This single theory, backed up by evidence, contradicted the widespread idea that the greater the income, the greater the happiness. The first question that came up was if people limit their ability to be happy once they reach a certain income level.

Another aspect of Easterlin’s paradox is the fact that, if we compare income differences within the same country, the results change. In the same country, people with less income are less happy and vice versa. How do we explain this?

Easterlin’s paradox reinforces the idea that having money and being happy aren’t related.

To explain all these observations, Easterlin used a Karl Marx metaphor. Marx once said that if a person has a house that caters to their needs, they can feel satisfied. But if their neighbor is a millionaire with a mansion, they’ll begin to feel as if their house was nothing more than a simple hut.

Easterlin draws two conclusions based on this. The first is that people with higher incomes don’t tend to be happier. The second is that people perceive their income as “high” depending on the income of those around them. This would explain the difference in the relationship between happiness and income.

Therefore, Easterlin’s paradox states that the comparisons we make to those around us influence our perception of well-being. In other words, the environment is crucial for our level of income to provide happiness or sadness.

In other words, is it possible to believe, based off of Easterlin’s paradox, that the great differences in income in a society are the source of discomfort? When there are great inequalities, being above others makes us feel very satisfied. However, when we feel as if we’re below others, we may feel frustration and sadness.

This has to do directly with satisfying our needs. Basically, my income allows me to live well. But if I perceive that others live a lot better than I do, I’ll feel that what I make isn’t enough.

This is probably what happens in the richest countries. As much as the majority of the population has its needs met, the display of wealth of the wealthy elites puts a shadow on those who aren’t as fortunate. In turn, people in poor countries may feel happier because they have less to compare themselves to.

Learning to Read: Factors and Influences
Learning to read is a slow and progressive process. It requires that many cognitive and extralinguistic abilities be put into practice. Read more here! Read more »
Link copied!
Interesting Articles
Literature and Psychology
The Top 7 Leo Tolstoy Quotes

Culture
Coloring Away Stress: A New Way To Relax