A therapist's skills can be decisive to promote positive change in their patient. This article is about five common therapist mistakes. Read on! 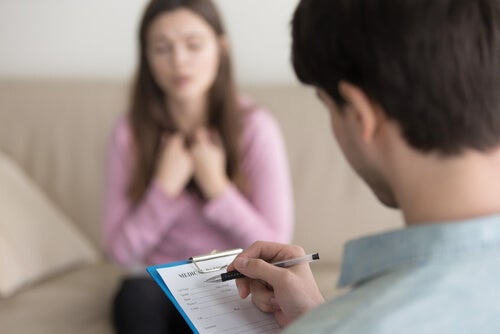 Many factors influence the development and results of psychotherapy, including these five common therapist mistakes. There’s a widely shared idea that recovery after therapy is the responsibility of those who seek help. However, adhering to it is a big mistake, since many variables influence a patient and they have little or no control over them.

The characteristics that explain a therapeutic change are the social support and strength of the person’s self (that is, the extra-therapeutic change); the specific techniques used in the therapy; the placebo effect or the expectations, and the therapeutic relationship, where the therapist’s mistakes can have a big impact.

Along with the extra-therapeutic change, a therapeutic relationship between the psychologist and their patient is a very important element in achieving change.

Thus, it becomes important to expose certain therapist errors that may threaten the therapeutic alliance. This factor represents approximately 40% in the progress a patient makes through psychotherapy (Corbella and Botella, 2004).

The following list is based on a chapter of Introduction to Psychotherapy: Common Clinical Wisdom by Pipes and Davenport that presents some of the most typical therapist mistakes.

1. Trying to solve the problem without really understanding it

This is one of the most common mistakes therapists make. Although certain types of therapy, such as psychoanalysis, seek an extensive understanding of the patient’s problems and invest time and effort in understanding their narrative, the truth is it doesn’t happen with al therapies.

A lot of this therapy happens in contexts where the minimum achievement of every session is synonymous with quality. For instance, the less time it takes to conclude a therapy, the better the therapist.

Therefore, in response to the imperfections of psychologists, some may comply with superficial pieces of information. Then, they’ll narrow down the problems and intervene without evaluating other areas that aren’t relevant.

When a patient attends a session in a low mood, for example, motivated by bad grades, the therapist will do an evaluation and plan an intervention. For example, they may assess their perfectionism, irrational thoughts of what it means to fail, and give them emotional management techniques for when it happens again. In short, they won’t even consider important components.

On this fashion, it may be that the patient has an eating disorder and they haven’t even discussed it because the food issue never seemed problematic. It may also be that when they told the therapist that their eating patterns worsened after poor results, the latter assumed that this phenomenon was just a consequence of poor grades.

An intervention not preceded by a good evaluation will fail. Nothing happens when the therapist doesn’t invest the time it takes to evaluate and get carried away by the anxiety of starting an intervention as soon as possible.

Despite what one might think of general culture, the verbal and non-verbal interventions of the therapist in a session must have functional value. Therefore, although humor, talkativeness, satire, and jokes are often useful in deepening a therapeutic alliance, therapists should exercise caution.

They have to consider this type of intervention with an objective, be it to confront or calm anxiety or to ridicule or expose ideas to achieve insight.

The therapist must also control their laughter while reinforcing a type of patient intervention. It’s necessary to examine the content of a joke as its purpose is usually to point out something specific.

How does it relate to the patient’s problem? And, above all, do they want for them to joke about it? For instance, you as the therapist talk to someone who’s unable to take anything seriously and has anger management problems. Then, at one point, they jokingly display a rabid attitude. If you laugh, you reinforce the idea that such anger attacks aren’t important.

This is also extrapolated to control the therapist’s own laughter when they want to reduce their own anxiety. If the therapist isn’t sure if a patient finds it difficult, then they laugh to calm down but convey the message that what was said is funny. This can confuse their patient. Thus, they won’t feel safe in the therapeutic alliance.

3. Pushing their patient to failure

Spectacular changes and fast achievement aren’t the norms. However, a therapist’s enthusiasm or haste may precipitate therapy in this direction when it’s just not possible. Be it because they’re trying to widen their social network, live new experiences, or carry out actions that aren’t truly valuable.

Forgetting or dealing with matters that may seem simple but aren’t for their patients is one of the common mistakes therapists make. Perhaps encouraging their patient to make more friends is something they’re not prepared for. In contrast, those attempts may go wrong as the person lacks the skills to hold a conversation. Or perhaps because they’re unable to control their anxiety in certain environments.

The lack of results on many occasions isn’t the responsibility of a patient, but of their therapist. This is because the procedure must be intelligent, making sure that all the tasks and recommendations they propose are suitable for their patient’s needs. It’s very important to consider the pace here.

4. Trying to be their patient’s friend

A therapist hasn’t invested years in psychotherapy training to merely be someone who listens and gives advice. Therefore, many experts agree that they shouldn’t become friends with their clients. It isn’t suitable for their therapeutic relationship and it makes confrontations difficult. In addition, because the tasks in therapy may be understood as optional and the client could be angry at the therapist’s expectations as a friend. This is one of the therapist mistakes that’s really hard to correct.

Therefore, professionals must avoid concrete actions that lead a patient to think that their therapist is their buddy. For example, don’t comment on the client’s appearance unless it’s a therapeutic matter. Never lend money and don’t advise on what should and shouldn’t be done. Additionally, there should be no socializing outside the office.

There are several types of interventions that can lead a patient to move away, distort messages, and feel they’re useless. If they feel this way and the feeling doesn’t change throughout the rest of the sessions, then it’ll be ineffective. Don’t forget the iatrogenic effects of therapy on a patient.

Although it’s normal for a therapist not to criticize directly, the patient may feel judged when you’re impatient. Similarly, when you tell them they’re not interested in changing or that they behave badly.

There’ll be times when a therapist may align with people with whom their patient doesn’t. It’s risky and counterproductive to be so explicit. In fact, it’s better to embrace and try to understand what they say and delve into their emotions than to tell them they’re wrong.

Finally, therapists should avoid certain phrases that make their client defensive such as: “Complaining won’t change things”, “You’re too defensive“, or “Stop feeling sorry for yourself”. Focus instead on the difficulties that the patient presents, and not so much in correcting their values as it’ll make therapy less arduous. Taking care of the therapeutic alliance is an important goal in this framework so that emotions such as enthusiasm, ignorance, or ego don’t push the patient away.

We hope you enjoyed reading about five common therapist mistakes!

The importance of family involvement in the treatment of patients with schizophrenia gained traction in the 1950s. In his studies,…