Ferdinand Magellan was a man of the sea, and adventurer. He had a hunch about a passage connecting the Pacific and Atlantic oceans. When he crossed the strait that now bears his name, he cried out of joy when he saw how calm the water was, after so many torments at sea. 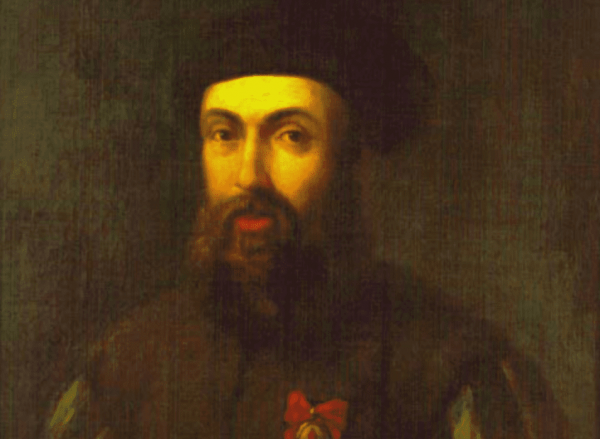 Ferdinand Magellan was the man who came up with and directed the first circumnavigation of the globe. He had to have a ton of courage to undertake such a journey because there was no way of knowing what was in store for him. His voyage truly was a massive achievement.

2019 marks 500 years since this first trip around the world led by Ferdinand Magellan. He let his intuition guide his way. During his time, no one was certain whether or not there was a passage between the Atlantic and the Pacific Sea in South America but Magellan believed that there had to be one.

“The Church says that the Earth is flat, but I know that it’s round. For I have seen the shadow of the Earth on the moon and I have more faith in the Shadow than in the Church.”

Although Magellan wasn’t able to complete this attempt at sailing around the world, he came really close. In the end, it wasn’t the sea that stopped him. It was his untimely death after a life full of bold adventures.

The early life of Ferdinand Magellan

Magellan was born in Porto, Portugal, in 1480. He was the son of nobles, which meant that he received a high-quality education, where he mostly studied cartography and navigation. During his studies, he lived in Lisbon. He also began traveling at an early age.

At 25, he went to India. He went on many other journeys after that. It was during one of these that he purchased a slave: Enrique of Malacca. Many people said that he was actually the first person to go all the way around the world because, unlike Magellan, he did ultimately return to Europe during that voyage.

At one point, Magellan traveled to Morocco, where he was injured in the foot during a battle. When he returned to Portugal, he fell out of favor with King Manuel I. That tension made him try his luck in Spain. Once there, he got Carlos I to authorize him to sail to India.

On August 10th, 1519, Ferdinand Magellan began his voyage. He had five ships under his command: Trinidad, San Antonio, Concepción, Victoria, and Santiago. His crew was made up of 270 men.

His expedition took him along the northern coasts of Africa down to Sierra Leone. Then, he headed west and ended up making it to the coasts of what’s now Rio de Janeiro. Later on, he encountered the Río de la Plata, which he mistakenly thought was the passage he had a hunch about. He was extremely disappointed to discover that that wasn’t the case.

Finally, he made his way to San Julian’s Bay in the middle of winter. He decided they would wait there for the weather to improve because the morale was low. The captains of his various ships were planning a mutiny against him. However, he caught them in time and decided to dismiss some of them and leave others to their fate.

In spring 1520, they were able to start again and ended up finding the passage he’d dreamt of for so long. There it was: the quickest way to the “southern sea”, which is what people called the Pacific Ocean back then.

Crossing that massive ocean had been an absolute torment, but on the other side, the sea was calm. That’s where it got its name, “Pacific”. The funny thing is that it’s actually the most furious ocean on Earth. Historians say that Magellan cried of joy when he saw the sea looking so calm.

That strait was named after Magellan. From there, he sailed north along the Chilean coast. Then, they went back out into open sea, heading further west.

Unfortunately, things got complicated. The crew was short on both food and water. Antonio Pigafetta, a historian on the expedition, described it like this:

“The bread we ate had turned into a cloud of dust full of worms that had consumed all of its substance. It also had an unbearable stench because it was full of rat urine. The water we drank was stagnant and foul-smelling. The only way for us not to die of hunger was to eat the pieces of leather on the mast“.

But they ended up making it to the Island of Thieves, probably what’s now known as Guam. They were able to stock up on food and water there. Once they were ready, they set out again and found another archipelago, which they named “Philippines” in honor of King Felipe II of Spain.

The natives on the islands were opposed to the sailors being there, and fought bloody battles against them. It was in one of these battles that Ferdinand Magellan died in 1521. The feat of sailing all the way around the world had to be completed by the surviving crew. Death prevented him from achieving his lifelong goal.