Feelings of Guilt and Their Connection to Anxiety

Anxiety has a huge emotional toll and often causes a feeling of constant guilt, that everything that's happening to you is your own fault, and that your suffering is a burden on other people. What should you do in these circumstances? 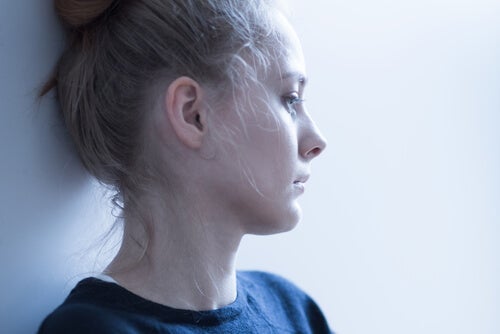 Feelings of guilt are a fairly common symptom of anxiety. Those who suffer from this condition draw quite harmful conclusions about themselves. They carry a burden on their shoulders that they aren’t responsible for. They also distort situations, which makes them suffer even more.

“I’m making things even worse”, “I’m sure I’ve hurt them due to my behavior”, or “I’m letting my family down”, “My mother became sick because of me” are just some examples. However, most of these statements follow a similar line.

The person in question is a victim of a type of tunnel vision that their anxiety is completely controlling. They often take the anxiety disorder or panic attacks as a sign that they’ve done something wrong, as an anomaly that’s beyond their control. They start to despair and wonder how they can cause themselves so much suffering and what’s wrong with them.

Self-blame, and the feeling that you’re disappointing or hurting those close to you, end up feeding the vicious cycle of anxiety. If we also add factors such as being overly self-demanding or engaging in obsessive thinking, it’s a time bomb for your mental health.

In the case of feelings of guilt linked to anxiety, it’s very common for them to arise in people who are always beating themselves up for doing or feeling certain things. They even feel guilty about thinking them.

The simple fact of being aware of a negative mental bias or of having a mind that sometimes lives in fear or uncertainty causes the shadow of guilt to emerge.

They see that they can’t control it and that their behavior makes those around them worry. All this simply further intensifies this uncomfortable and destructive feeling.

Feelings of guilt and shame in anxiety

Research that was recently published in the magazine PLOS ONE and conducted at the Karolinska Institute in Sweden states that anxiety disorders are often related to feelings of guilt and shame.

It’s obvious that these are two different types of feelings. However, they’re both expressed under a common trigger. What trigger? The inability to be able to control feelings and the subsequent discomfort this produces.

Guilt implies that you feel bad about something that you’ve done, said, or experienced. Shame, on the other hand, is more harmful in people with anxiety or other types of disorders. It means that you feel bad about who you are as a person. Also, it arises when you underestimate or undermine yourself and, at the same time, blame oneself for practically anything that happens.

How can you manage the emotions associated with anxiety?

The best method for calming, untangling, and placating feelings of guilt or shame is to focus on the trigger that intensifies and shapes them: anxiety itself.

In these situations, cognitive-behavioral therapy (CBT) or even acceptance and commitment therapy are useful and effective.

Nevertheless, it’s always useful to know how to handle complex emotions such as guilt. Let’s have a closer look at some tips that could help you:

In conclusion, make every effort to free yourself from the burdens that feed the anxious thoughts in your mind.

Five Tips for Overcoming Guilt
Do you feel that past mistakes and the remorse you feel as a consequence are holding you back? You may need some keys to overcoming guilt. Read more »
Link copied!
Interesting Articles
Emotions
How to Deal with Negative Thoughts

Emotions
Face Your Darkest Emotions to be Happy

Do you feel sad, angry, critical, or worried? The good news is that it's alright. You have to be strong…

Rage and depression are two realities that usually go hand in hand. Stereotypes tell us that a person who's depressed…