Faith Ringgold: A Woman Who Embraced Her Destiny

Faith Ringgold used her talent to spread her experiences and expose racism in American society. Discover how Faith created beautiful art from her experience of having been a victim of racial discrimination. 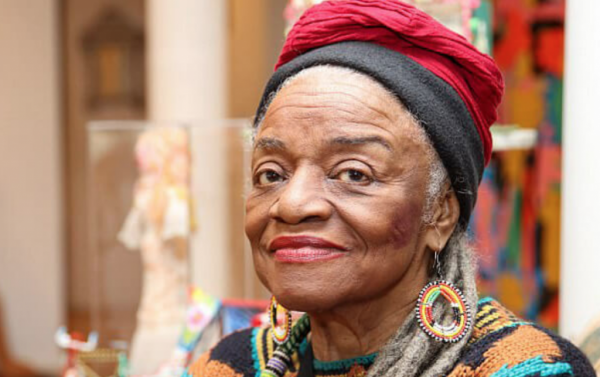 Faith Ringgold is an American artist known for presenting her own unique art forms. Among all her creations, her story quilts really stand out.

Her work highlights ethnic tension and the political and racial unrest of the 1960s and provides a crucial insight into how white culture perceived African Americans.

Making quilts is rooted in southern slave culture in the era of the Civil War. In this way, the artist took the traditional job of making quilts and reinterpreted its role to tell stories of her life and those of many other African Americans.

Faith Ringgold was born as Faith Willie Jones on October 8, 1930, in New York City. Her father, Louis Jones, was a truck driver, while her mother, Willi Posey Jones, worked as a fashion designer. Her parents managed to earn enough to provide for the basic needs of their three children.

Faith Ringgold was unable to attend elementary school regularly due to health problems. Since she suffered from asthma, she spent most of her childhood in hospitals or at home. During this time of her life, she developed her love for drawing and subsequently studied art at the City College of New York.

She married Robert Earl Wallace, a jazz pianist, in 1950, but the marriage didn’t last long. They divorced in 1956. She had two daughters from this marriage, Barbara and Michele. Faith remarried Burdette Ringgold on May 19, 1962.

After she graduated, Faith worked as an art teacher at City College in New York. In addition to that, she worked at Wagner College and Bank Street College of Education in the 60s and 70s.

In the early 70s, she abandoned traditional painting. Instead, Ringgold began to make acrylic paintings on canvas with lush cloth edges like those of Tibetan thangkas.

In addition, she worked with her mother designing masks made with cloth hoods, beads, and raffia. These were rooted in the African tribal tradition and they were her first works of art.

Also with the help of her mother, Faith became involved in the production of life-size portraits of famous people such as Adam Clayton Powell, Wilt Chamberlain, basketball players, and other personalities from Harlem. For this reason, this artwork would be known as The Harlem Series.

At the same time, Faith promoted African art at college. In her classes, she taught African jewelry design, clothing, and beads.

Politics in the artwork of Faith Ringgold

Faith Ringgold was deeply attracted to political issues linked to the exploitation of women. These political motivations were, in turn, influenced by the rise of the Civil Rights Movement. In her artwork, she was able to depict the suffering of a community that she herself had experienced.

“I became a feminist because I wanted to help my daughters, other women, and myself to aspire to something more than a place behind a good man.”

This way, Ringgold managed to expose social injustice through the paintings she produced in the 1960s. From this period, her paintings included American People and The Flag is Bleeding.

Her artwork was mainly inspired by the work of writers James Baldwin and Amiri Baraka. Both authors wrote about discrimination and the struggle of black people in the United States.

“No other creative field is as closed to those who aren’t white and male as is the visual arts. After I decided to be an artist, the first thing that I had to believe was that I, a black woman, could penetrate the art scene and that I could do so without sacrificing one iota of my blackness, my femaleness, or my humanity.”

The quilts tell a story

Faith broadened her field of fine arts and helped sewing, weaving, and fabric composition find a place in the artistic world. She was the first artist to challenge these limitations and introduce the art of weaving into colleges.

The concept of these quilts evolved from the art of weaving introduced by African slaves in America. These quilts went beyond their basic purpose of providing warmth and became a way of preserving memories. Somehow, these fabrics worked like message boards.

Faith’s unique approach promoted female crafts using these narrative quilts. On them, you can see a series of images, along with descriptions that tell a story.

Echoes of Harlem was the first of more than 30 quilts that she made from 1980 onwards. Each one of them adopted the structure of children’s stories, and each part of the quilt corresponds to a page.

One of her most famous story quilts is Tar Beach. On it, you can see the representation of a family gathered on their rooftop on a warm summer’s night.

You can see adults visiting each other, while children play and sleep. We can also see the daughter dreaming about being able to fly freely over all barriers that had been erected against black people. This scene is represented by the George Washington Bridge in the background.

Despite living in New York, Faith’s work was always far-removed from contemporary American art. This was mainly because her only topic was black culture and racial discrimination, which is why it isn’t surprising that she didn’t spark the interest of the more conservative and elitist circles.

Faith is also known for her social activism. She fought with all her heart for the rights of African artists at the Whitney Museum of American Art in New York.

Her struggle was clearly shown in the activities of the Women’s Art Committee, founded by artist Poppy Johnson and art critic Lucy Lippard. As a social activist, she has used art to found and develop organizations that support African-American artists, such as Where We At.

Its foundation, Anyone Can Fly, is dedicated to expanding the art catalog to include artists from the African genre. In addition, the foundation devotes itself to introducing African-American art teachers to children and adults.

Her most recent works address prejudice in a different way; she no longer uses confrontational images to attack prejudices, but instead opts to subvert prejudices by providing positive models to young African-Americans.

“You can’t sit around and wait for somebody to say who you are. You need to write it and paint it and do it”.

Faith Ringgold became the first black woman to be able to exhibit individually at The Spectrum Gallery in New York in 1967 and 1970. Her achievements as an artist, teacher, and activist have brought her numerous honors. She has almost 75 awards to her name, including an Honorary Doctorate of Fine Arts.