Encopresis is one of the two "elimination disorders," alongside enuresis. It happens with children between 4-9 years old, and can be extremely hard for them. In this article, we're going to tell you what it is, what causes it, and how you can treat it effectively. 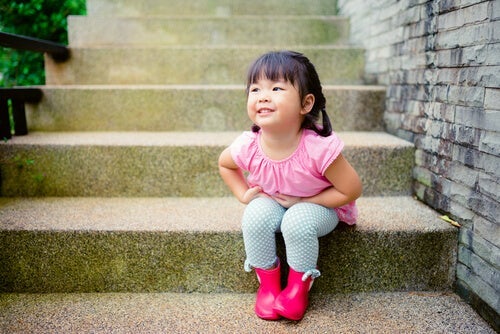 Encopresis is one of the two so-called elimination disorders, along with enuresis. These two conditions involve the inability to hold in feces and urine at ages in which a child should be able to do that.

Encopresis is specifically the inability for a child to control their bowel movements. Enuresis involves an inability to hold in urine. In either case, that inability can be very problematic when it happens in inconvenient places.

The age children generally need to have learned to control their pooping is around four. From that age on, they shouldn’t need a diaper to avoid soiling their clothes anymore. But before diagnosing a child with encopresis, you have to rule out other medical issues or substances (such as a laxative) that may be causing it.

There are actually some medical conditions that can cause an inability to control defecation. One example of that is Hirschsprung disease (a lack of nerve cells in the bowels), an aganglionic megacolon, or something simpler such as lactose intolerance.

Encopresis with or without constipation

According to the classifications of the condition, there are multiple types of encopresis. These mostly have to do with the concept of overflow. There’s a form of encopresis that involves constipation, or overflow incontinence, and one that doesn’t involve incontinence.

When it comes to this elimination disorder, it’s extremely important to take your child in for medical exams and study their medical history. You can’t treat these two types in the same way.

Retentive encopresis usually involves a very disorganized pooping schedule. That means there will be lots of cases of soiling. Another possibility is that a child may go to the bathroom every day, but doesn’t expel all their feces.

Medical exams are important here because your doctor will be able to see if this is the issue through X-rays. Many studies state that retentive encopresis is caused by physiological changes. About 80% of all encopresis cases are retentive.

The causes of encopresis without overflow incontinence tend to do with poor potty training, stress in a child’s environment or family, or oppositional behavior. When it comes to this version of the condition, you need to rule out other things such as mental and antisocial disorders.

According to the DSM-5, it’s best to take your child for a psychiatric evaluation. This will provide an opportunity to explore other possibilities such as oppositional defiant disorder and other behavioral, mood, or psychotic disorders. For example, if your child is going through depression, the encopresis could just be a symptom.

This is also important because the causes for primary and secondary encopresis are different. If your child has never learned to control their bowel movements, this could be the result of some kind of early fixation and, therefore, a physiological problem.

There are many potential causes for the secondary version (when they get better then worse again). For example: environmental factors, stress at school or at home, anxiety, etc.

Another interesting tidbit is that, unlike enuresis, encopresis is more common during the day than night.

Epidemiology: Who does it most frequently affect?

The impact on children and adults

Due to the nature of the disorder and the taboo we’ve always had around defecation, encopresis can be an extremely hard process for a child to go through. It can affect their self-esteem and self-image because it’s very hard to hide.

Children already attend school by the ages that encopresis manifests. Defecating in the middle of recess or not being able to hold it in during class can be very stressful for a child.

Like most conditions, there are many different factors at play with encopresis. They can be both psychological and physiological. There’s no evidence that this is a genetic issue.

Some theories say that this has to do with a learning deficit. In this case, the issue would be that the signals a child’s body sends them to tell them they need to use the bathroom haven’t been conditioned as discriminative stimuli. That means that the child doesn’t realize they need to go to the bathroom, so they don’t.

Other theories state that retentive encopresis has to do with avoidance behavior. Basically, a child learns to hold it in as a way to avoid pain or anxiety. This is a form of negative reinforcement that leads to a cycle of constipation that can lead to secondary encopresis.

As for the nonretentive form, some people think it’s caused by children who haven’t learned to defecate properly. In most cases, they get distracted and end up soiling themselves. The problem here is still sphincter control, however.

Medical treatments usually involve a combination of laxatives and enemas. Doctors may also recommend a change in diet, specifically lots of fiber and liquids. There’s also something called the Levine Protocol (1982), which involves psychoeducational factors (showing a child drawings of a colon, etc) and incentivizing.

Behavioral treatments tend to focus especially on teaching children routine habits for their bowel movements, reorganizing their environment, stimulus control, and the reinforcement of alternative behavior. Lastly, researchers Howe and Walker (1992) developed a method that uses operant conditioning to help solve the problem.

There are many different causes and types of encopresis. As natural and treatable as it may be, it tends to be very unpleasant for children.

Leaving them to their discomfort when you could help them treat it is unethical, and you need to think about what their encopresis could be telling you. It may be a symptom of another problem. This is why both medical and psychological evaluations are so important when it comes to this condition.