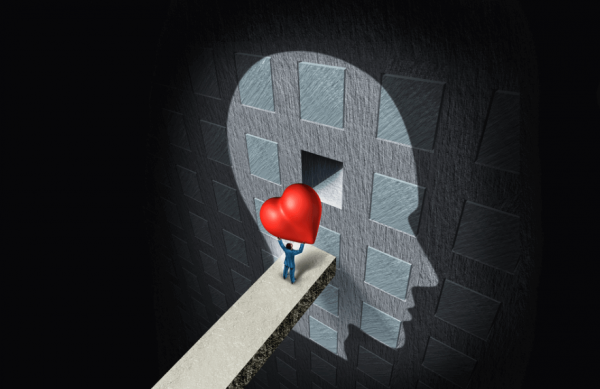 Emotions are one of the most important parts of your psychological life. They’re universal and they have an ability to condition your thoughts and physiological processes. They can change the rhythm of your heartbeats, the pauses in your breath, and even the conductivity of your skin.

They’re also vital because they help you recognize them in other people. People all experience happiness, pain and surprise. They’re like you in a general way but when it comes to the small details we’re all very different. There are no two faces that have the exact same wrinkles or expressions. And it’s exactly the same with our emotions.

The first side of your emotions: the message

In the title to this article we said that emotions are a two-sided coin. Both of those sides are just as valuable, but they can also both get twisted around or turn against you. What’s the first side? The first side of emotions is their message: it’s what they tell you or try to tell you.

Joy tells you, “Hey! In case you haven’t noticed, something good happened!” It gives you a poke because it’s time to enjoy yourself and you’ll probably have a good time. A smile pops out and your face shines. You bloom like a flower because you want to share what’s going on with you as you embrace that emotion with all your heart.

Joy also tells you that you were right about whatever decision you made. It validates the path of action you chose and reinforces it. So whenever you face a similar dilemma it’s more likely you’ll end up going for the same option again.

Plus, joy makes you more generous and less skeptical. Once you understand the message it’s sending, you might even start to feel like you’ve been a bit “dumb” for worrying about everything so much.

“To get the full value of joy you must have someone to divide it with.”
-Mark Twain-

Sadness has some messages for you too. It tells you that you’ve lost something that’s important to you in some way. It might be a friend, an opportunity, or even an object you had a lot of affection for.

Sadness is also a call for you to stop for a second and think. It usually tells you there’s something that doesn’t fit in your story. You’ll need to spin it around to see if you can get it to go in nicely without poking you with its sharp corners and hurting you.

The emotion with maybe the most powerful message is disgust. It’s a clear and direct call for you to push yourself away from whatever caused you to feel it. It’s not so different from how fear tells you to get away from a dangerous situation, although you don’t have to consider as many responses. The most common response is avoidance.

These three emotions are just some examples of the first side of the coin: the message. And they should also make it clear why emotional intelligence is so important here. It’s about knowing how to listen and figure out what the emotion is trying to tell you. But if it’s so simple, then why is it so hard for us?

Well it’s because it’s not very often that you’ll only experience one emotion at a time. How many times have you felt both joy and fear simultaneously? Think of a time you started a new, exciting project and then all of a sudden you started to have doubts about whether you were capable.

Or think of when you have a chance at a new opportunity but that will mean saying no to a lot of other ones you’d like to take… or when you move and get close to some people while growing apart from others.

The second side of emotions: the energy

You just got home completely worn out, you go to the kitchen to eat something and all of a sudden you see thick black smoke coming from the apartment under you. In that moment, all your tiredness disappears and you get in gear.

It’s the exact same thing that happens with students when they have an exam the next day and can spend hours and hours studying. A lot of the emotions you feel can energize you more than any caffeine-filled energy drink.

The more intense the emotion is, the more energy it will give you. This can be very good if you’re in the jungle and you run into a lion. But in the modern world, the one we live in now, you have to handle the energy much more intelligently. For example, you can do a lot of harm with the energy you get from anger or rage, both to yourself and other people.

You may say or do something you’ll regret later, causing damage that’s as unpleasant as it is hard to erase. Exercise, for example, can be so good for emotional regulation. It gives you a way to release that energy without hurting yourself or others.

Heads or tails? As you’ve seen, emotions really are both. Information and energy. They’re very powerful elements that can bring you a lot of joy if you know how to channel them intelligently.

What is Emotional Catharsis and Why Is It Good for Us?
Crying uncontrollably, outbursts of anger: all of this is what is known as emotional catharsis. Learn how good it can be for you. Read more »
Link copied!
Interesting Articles
Psychology
Reversible Thinking: Fighting Cognitive Laziness

The famous creator of the automobile brand Ford, Henry Ford, in order that the company might become more productive, decided…

Psychology
What Does Your Tone of Voice Convey?

Tone of voice is one of the most influential elements of communication. There are a factors in the sound of your…