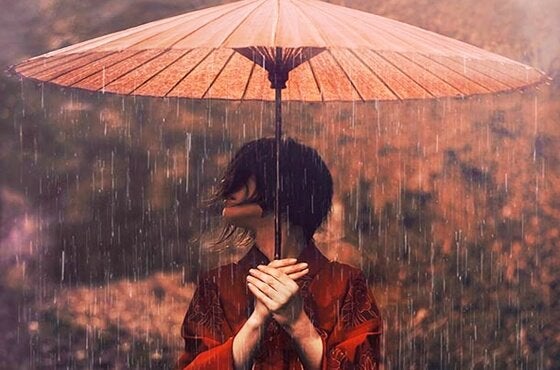 Whenever Japanese people find themselves lacking something at any point in their lives, for them it is often a first step towards wisdom. Embracing vulnerability is a form of courage that sets into motion the healthy art of resilience. And resilience gives us perspective and the will to keep going.

In Japan, there’s an expression that started to be used after the atomic bombings of Hiroshima and Nagasaki. This expression also came up after the tsunami of March 11, 2011. “Shikata ga nai” means “there is no choice,” “there is no alternative,” or “there is nothing we can do.”

“Honesty and transparency make you vulnerable. Whatever the situation, always be honest and always transparent “
-Teresa of Calcutta-

Instead of seeing the expression as defeatist, submissive or negative, like a Westerner might, the Japanese feed on it and understand it in a more helpful, transcendent way. When it comes to extreme injustice, rage and anger are useless. As is responding to suffering by lamenting, “Why me?” “Why do these things always happen to me?“

Acceptance is the first step towards liberation. It’s clear we’ll never be completely free of sadness and pain, but if we simply accept what has happened, we’ll be able to keep pressing on and living life.

Since the earthquake of 2011 and the subsequent nuclear disaster in Fukushima Daiichi, many Western journalists have traveled to northwest Japan to report on how people are coping in the aftermath of these tragedies, and how they’re slowly getting back to their lives. And it’s fascinating to see how they handle the pain and the loss of their entire lives.

However, the journalists return to their countries with more than just a news report, eye-witness accounts and shocking photos. Instead, they go back to the routine of their Western life with a clear feeling of being changed inside and having acquired real wisdom. Mr. Sato Shigematsu, who lost his wife and son to the tsunami, is an example of such wisdom.

Every morning he writes a haiku. A haiku is a poem composed of three verses. Traditionally the Japanese write about nature or everyday life. Mr. Shigematsu finds great relief in this kind of routine, and he showed journalists one of these haikus:

“Devoid of belongings, naked
And yet blessed by nature
Caressed by the summer breeze that marks its beginning.”

As this survivor of the 2011 tsunami explains, embracing his vulnerability each morning in haiku form helps him connect better with himself and be renewed, like in nature. He also understands that life is uncertain, and sometimes unforgiving and cruel.

However, learning to accept what happened and say to oneself, “Shikata ga nai,” (accept it, there is nothing you can do) allows them to stop focusing on the grief and instead focus on what really matters: ‌‌rebuilding their lives and the land.

Nana korobi ya oki: If you fall down seven times, get up eight

“Nana-Korobi, Ya-Oki” (if you fall down seven times get up eight) is an old Japanese proverb reflecting the ideal of resilience that’s such a big part of Japanese culture. This attitude can be seen in their sports, how they do business, their focus on education, and even in their art.

“The wisest and strongest warrior is formed with the knowledge of his own vulnerability.”

However, this idea of resilience is nuanced. Understanding the nuances will teach us to approach adversity more sensitively yet effectively. Now, let’s look take a closer look…

What vulnerability has to do with resilience

According to an article published in the “Japan Times” newspaper, the art of acceptance or “Shikata ga nai” is good for the body. It regulates our blood pressure and minimizes the impact of stress. In other words, accepting tragedy and getting in touch with our vulnerability and pain is a way to stop fighting against things that we can’t change.

Therefore we must be patient and prudent, but at the same time, persistent. It doesn’t matter how many times destiny or natural disasters push us down. Surrender is not an option. Humankind persists, and so let’s learn from the valuable, remarkable wisdom Japanese culture offers us.

All human beings have or feel impulses. In most cases, however, your impulses aren't intense enough to overwhelm your ability to control them. On the other hand, even if your…

Psychology
Can We Fall in Love with Anyone?

We fall in love in ways that are completely subconscious and intuitive. It is not necessary for us to do complicated mathematical…